“From the start, Waters politicized camp, using it as a deliberate assault on mainstream culture. He employed gay camp as a counter-cultural means, as an oppositional standpoint and active force.”—Emanuel Levy

The following is an excerpt from Emanuel Levy’s chapter on John Waters from his new book: Gay Directors, Gay Films?: Pedro Almodóvar, Terence Davies, Todd Haynes, Gus Van Sant, John Waters. In it, Levy explores Waters’s notion of camp and his cult classic Pink Flamingos Also, at the bottom of the post is a recent photo of Levy and Waters!

The brand of camp that prevails in Waters’s output is what the scholar Barbara Klinger has called mass camp. Media products qualify for camp enjoyment because they exhibit exaggerated exotica in their historical outdatedness. Mass camp depends on a thorough knowledge of pop culture and a familiarity with the conventions of established genres (e.g., Mae West comedies, Busby Berkeley musicals). Mass camp sensibility does not necessarily result in a coherent rereading of a film—it’s more of a hit-or-miss sensibility. The viewers’ interaction with a particular text always bears some effects, but the effects may be temporary—that is, discernible only in the short run. Thematic and visual pleasures come in a sporadic manner as viewers dip in and out of a particular text, selecting specific moments: witty dialogue, quotable lines, lavish musical numbers, and physical appearances and costumes.

Gay camp usually relies on (or imitates) the hyperbole of movies and pop culture through overstated décor, fashion, and cross-dressing. In verbal terms, it’s reflected in quotations, mimicry, lip-synching, gender inversion, put-downs, and witty puns. Gay camp is of real value to its practitioners because it enables them to demonstrate their insider status, their very cultural existence, and often their superiority over straight outsiders, who don’t dig what they dig when they experience the same movie or TV show.

From the start, Waters politicized camp, using it as a deliberate assault on mainstream culture. He employed gay camp as a counter-cultural means, as an oppositional standpoint and active force. For him, camp attacks acceptable values, normal physical appearances, and conventional modes of behavior. It could be either a mild or a
radical rejection of essential tenets of traditional aesthetics. Waters’s brand of camp thrives on exaggeration, theatricality, and travesty, as is evident in the glorification of the characters in his texts and the particular actors who play them. The elements of his aesthetics are deemed cheap, sleazy, vulgar, and crude because the plots of his features transgress the bourgeois sense of decency and morality. Instead, they loudly extol bizarre and grotesque sexuality that’s considered appalling by standards of middle-class taste.

Gay camp is manifest in most of Waters’s films, intentionally and unintentionally. The components of gay camp include admiration for performers like Divine and the casting of movie stars who parody their own screen image, such as the gay actor Tab Hunter in Polyester, or the very straight Troy Donahue in Cry-Baby, or the eroticized Joe Dallesandro, a cult figure in works by Warhol and Morrissey. Waters’s camp comedies are ambivalent about their subject and style, raising questions of what is being satirized and for what kinds of spectators. They are blatantly vulgar and deliberately crass, drawing on deviant sexuality as a source of humor and defying normative definitions.

What exactly has made Pink Flamingos a cult movie? The scholar Umberto Eco has shown that to qualify as a cult item, a movie doesn’t have to be a work of art judged by high aesthetic standards. He cites Casablanca and Gone with the Wind, which have assumed mythic cult status, though most critics would agree that they represent modest but not necessarily superlative aesthetic achievements—even by Hollywood yardsticks. For Eco, a cult movie is a “hodgepodge of sensational scenes strung together implausibly,” with characters that are psychologically incredible and actors who act in a mannered way. The particular work must be loved, but it must also provide a completely furnished world so that its fans “can quote characters and episodes as if they were part of the beliefs of a sect, a private world of their own, a world about which one can play puzzle games and trivia contests, and whose adepts recognize each other through a common competence.”

The characters and subplots of a cult work tend to have archetypal appeal. A cult movie displays organic imperfections, which is why Rio Bravo is a cult movie, whereas Stagecoach is not, though both are accomplished generic works (Westerns), helmed by the legendary directors Howard Hawks and John Ford, respectively, and displaying commanding performances by John Wayne. In order to transform a work into a cult object, viewers must be able to unhinge it, to break it up, so that they remember only parts of it, regardless of their original relationship to the whole. Disjointed moments tend to survive as a disconnected series of images. Cult movies often display not one central idea but many ideas, and they do not exhibit a coherent philosophy or even structure. Hence, Pink Flamingos lives on—and is continuously revived—because of its rawness (primitiveness?) and disjointedness. Similar observations can be made about the musical-horror feature The Rocky Horror Picture Show, made at the time when Waters was at the height of his popularity, which was an artistic and commercial flop when first exhibited in legit movie houses.

Cult movies like Pink Flamingos exist and speak to one another independently of their authors’ intentions. They provide proof that a particular film comes from other films and that once a film is made, it assumes an independent life of its own. Waters could not have anticipated that Pink Flamingos would become a cult movie. Nor did Ridley Scott, in 1982, when he made Blade Runner, a noir apocalyptic tale that was not well received upon initial release and went on to become a cult movie despite negative critical response. It’s worth noting that critical reaction to both Pink Flamingos and Blade Runner has also changed over the years into a more appreciative one, showing the shifting nature of criticism itself.

The notorious “doggie” finale of Pink Flamingos, as well as other scenes and lines, can be enjoyed for what they are, regardless of the particular place they occupy within the larger narrative. They work in the same way as two or three scenes from Mommie Dearest, starring
Faye Dunaway as the emasculating Joan Crawford: the wire hangers, the axe, the physical fight between mother and daughter. These scenes can be easily removed from their original textual meanings, which explains why they have been playing over and over again in video bars frequented by gay men and savvy urbanites enamored of camp culture. The cult status of Pink Flamingos was confirmed in 1997, when for its twenty-fifth anniversary it received a limited theatrical rerelease and a new DVD version, now rated NC-17 by the Motion Picture Association of America (MPAA) and a more savvy and positive response from a new generation of critics. The new edition features an improved soundtrack, commentary by Waters, and several scenes deleted from the original cut.

In the first two decades of his career, Waters’s identity had thrived on excess and exaggeration—on his wish, as he said semijokingly, for his own life to be “torn from the headlines.” The National Enquirer, which he considers to be the ultimate barometer of fame in America, has informed his earlier sensibility. His protagonists have shared their director’s penchant for gaudy and lurid events. His fascination with crime and court trials is based on his belief that “when you
do something horrible, you can’t change it.” “I think it’s a matter of things being forbidden,” he has repeatedly said. “That’s part of the glory of being raised a Catholic. It makes you more theatrical, and the sex is always better ‘cause it’s dirty and forbidden.” Moreover, his moonlighting as a prison lecturer is a direct outgrowth of his attraction to the forbidden along with his undeniable service orientation. 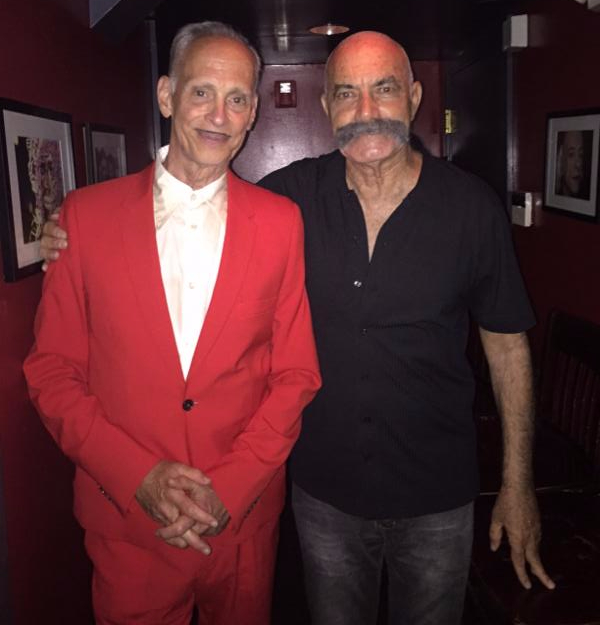