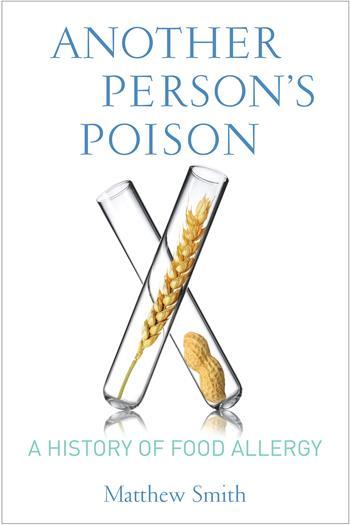 “Do we really need to eat peanuts at AC/DC concerts? Of course not. We accommodate our society to be more livable for other vulnerable people, so I don’t see why we can’t for the severely allergic.”—Matthew Smith

The following is an interview with Matthew Smith, author of Another Person’s Poison: A History of Food Allergy

Question: What is a food allergy?

Matthew Smith: Well, that depends on who you ask. Allergy was originally defined in 1906 by Austrian pediatrician as “any form of altered reactivity,” a broad definition if there ever was. Early food allergists—and many still today—embraced this definition and described a wide variety of reactions to food, ranging from asthma and eczema to migraine headaches and hyperactivity, as allergy. More conservative allergists, however, chose to limit their definition of allergy to instances in which evidence of the immune system reacting against a foreign substance could be proven definitively. Since this is difficult to do for many food allergies, they believed that food allergy was much less common than their food allergists colleagues. Debates about this precise definition have fueled debates about food allergy for over a century.

Q: Do you have any food allergies?

MS: No, not a one. My children seem to get hives if they eat too many strawberries and my wife is allergic to penicillin, but I am, thankfully, food allergy-free. Unlike my previous books on hyperactivity, where I had a strong, personal connection to the topic, I was drawn to the history of food allergy primarily because it is so fascinating. I loved learning about immunology, not least because it is such a deeply personal facet of human physiology. On the surface, we all have immune systems that protect us from the same sorts of pathogens that we encounter in the environment. But at a deeper level, immunology is all about how the body distinguishes self from non-self, as Nobel Laureate Frank Macfarlane Burnet put it. For most people, the immune system sees food as “self” and takes no interest. But for the allergic, food is perceived as “non-self,” a threat that must be countered at all costs. The meaning of it all is bemusing, but also compelling.

Q: Why are rates of food allergy, and especially peanut allergy, increasing?

MS: No one knows. Many hypotheses have been put forth, but none have been conclusively proven, let alone explored in much depth, unfortunately. A few seem more plausible than others. If you think of when von Pirquet defined allergy, this was a time when children were getting vaccinated against once endemic infectious diseases and when improvements in water quality and sanitation mean that people weren’t habitually infected with helminthic parasites (worms). Perhaps with less to cope with, immune systems turned to something else. Similarly, the hygiene hypothesis speculates that children grow up in overly hygienic environments, meaning that their immune systems aren’t exposed to as many pathogens as before. More controversial theories implicate the peanut oil found in some vaccines and environmental pollutants. Of course, genetics play a role, too. I suspect that many factors are at play, as they are in other chronic conditions, but also believe that we need to spend more time investigating them.

MS: Let’s rephrase that question. The term allergy was only coined in 1906, so it is somewhat anachronistic to apply it to cases prior to then. If the question is: have people always reacted strangely to foods, then the answer would be most certainly. None other than Hippocrates described how some people react very badly to cheese. Such reactions were called idiosyncrasies, and they could manifest themselves in dermatological, respiratory, gastrointestinal, and even neurological symptoms. I don’t think that physicians trained in humoral medicine, which dominated western medicine for 2,000 years, would have found idiosyncrasies an especially surprising phenomenon. This is partly because food was used to balance the humors that were necessary for health, but also because humoral medicine emphasized constitutional individuality. In other words, physicians would have recognized that foods could exert a powerful influence on human health, and especially so for certain people.

Q: You make comparisons between psychiatry and allergy throughout the book—what’s the connection?

MS: There are three. First, I know about both allergy and psychiatry and I think it is useful to make comparisons, when appropriate, in order to understand better how medicine operates more generally. Second, allergy and psychiatry have long been the ugly ducklings of medicine, particularly in North America. Perceived as not being rooted securely enough in scientific medicine, awash with peculiar, apparently contradictory theories, and tasked with treating notoriously recalcitrant conditions, allergy and psychiatry have struggled for scientific legitimacy throughout the twentieth century. As a result, both disciplines have struggled to attract the best medical students to specialize in them, to gain a large enough share of the medical curriculum, and to attract research funding for long periods in their histories. Third, there is a longstanding connection between allergy and mental health. On the one hand, many allergists during the middle of the twentieth century believed that most allergies were psychosomatic, in other words, the result of mental disturbance. On the other hand, many other allergists have blamed psychiatric problems on allergy. So, the two disciplines have many links, whether they like it or not.

Q: Are we too paranoid about food allergy?

MS: No, I don’t think so. My kids don’t appear to suffer from allergies, but if they did, I would want them protected. It is a pain not to be able to slap a peanut butter sandwich together for my son’s lunch and chuck a kiwi in for good measure, but kids at his nursery are allergic to peanuts and kiwi, so I’m willing to make something else. Do we really need to eat peanuts at AC/DC concerts? Of course not. We accommodate our society to be more livable for other vulnerable people, so I don’t see why we can’t for the severely allergic. In addition, I think we need to talk more about food allergy and why it exists in the first place. Maybe we shouldn’t be paranoid, but we certainly should be more curious about it, its origins in our natural history, and what it says about our relation to food and our ever-changing environment.