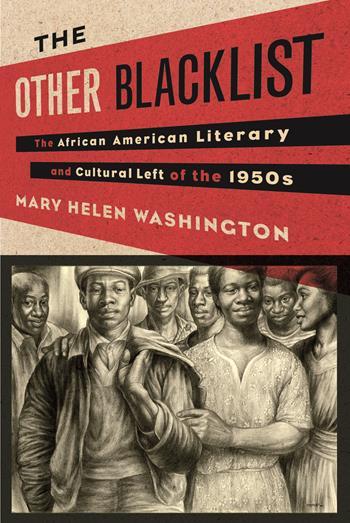 “I’m trying to restore that tradition of mid-century black left radical resistance, so that we don’t remember the 1950s only as the era of ‘integration’ but as the era of black civil rights radicalism. I’m restoring the other blacklist, the black blacklist.”—Mary Helen Washington

As part of our series of posts for Black History Month, we’re re-posting our interview with Mary Helen Washington, author of The Other Blacklist: The African American Literary and Cultural Left of the 1950s:

Question: Why did you choose to focus on the 1950s?

Mary Helen Washington: I came of age in the early 1950s in Catholic schools in Cleveland, Ohio, fed on a steady diet of anticommunism at school, and, at home, a steady diet of integration, but both of those prescribed lessons—anticommunism and integration—separated me from the story of radical civil rights activity. While the black left of the 1950s was protesting discrimination on every front, from residential segregation to unions and factories, we black kids were being taught that integration meant blacks becoming acceptable to the white mainstream. When the left-leaning National Negro Labor Congress (NNLC) came to Cleveland for their 1952 conference, they staged a protest downtown against the airlines for refusing to hire blacks. Since stories like these were blacklisted by the anticommunists as well as the integrationists, black kids grew up in the 1950s with no access to a critical discourse on race. Radicals used terms like white supremacy and racial justice, not integration, while black kids were learning that we should dress, act, and speak a certain way as a marker of acceptability, radicals were defining integration as claiming the rights of citizenship—as you can see from the NNLC poster featuring the Statue of Liberty as a black woman.

Q: Why did you call the book The Other Blacklist?

MHW: Most of what we know about the McCarthy era focuses on the white left. Communism is seen as a white left radicalism, though black civil rights activists were deeply involved in radical movements in the 1940s and 1950s. People who were investigated by J. Edgar Hoover for being communists were routinely asked if they were involved interracially because civil rights activity was considered radical. This is a very powerful and commendable radicalism that black people don’t get credit for. They weren’t the Hollywood Ten, but they were the New York/Chicago 100. There’s a fine documentary on screenwriter and novelist Dalton Trumbo and his admirable resistance to HUAC, but there’s no documentary on black radicals like Alice Childress, Lloyd Brown, Julian Mayfield, Charles White, Elizabeth Catlett or Lorraine Hansberry [some of the figures in my book], who also paid a price for their radicalism. I’m trying to restore that tradition of mid-century black left radical resistance, so that we don’t remember the 1950s only as the era of “integration” but as the era of black civil rights radicalism. I’m restoring the other blacklist, the black blacklist.

Q: You have a chapter called “Spycraft and the Black Literary Left.” Can you talk about the connection between government agencies, politics, and art?

MHW: Keep in mind that the Left and the Communist Party supported black artists when no one in white mainstream culture (with the exception of J. Edgar Hoover) showed any interest in black culture. They came to the defense of black culture because they saw art as a means to effect social and political change. One critic Willliam Maxwell says that Hoover should be considered an important historian of black culture because he always took black literary production seriously. The FBI files are thus a mixed blessing—a gold mine for biographical material because the FBI kept close track of the activities of radicals, and also a record of governmental abuse of artists and intellectuals. There’s a current play on Broadway about the life of Lyndon Johnson called All the Way that shows how relevant these issues still are. The character playing J. Edgar Hoover asks LBJ to justify his relationship with Martin Luther King because, Hoover claims, King is being advised by communists. The government, particularly in the age of McCarthy and Hoover, created the tradition of demonizing the Left that is still with us and that has resulted in the dismissal of an entire generation of black intellectuals and artists.

Q: Why is radicalism of the 1950s still relevant?

MHW: We’re grappling with the same issues today but without that radical perspective. I’m thinking about Rachel Jeantel in the Trayvon Martin case and all the discussion that was generated about Jeantel’s appearance and speech—the way she looked rather than the case itself. Another example is Paul Ryan saying “inner city” people live in a culture that doesn’t value work or doesn’t have a work ethic. And here we see how “inner city” becomes a code for “black.” The jurors from the Jordan Davis case in Florida, one white and one black, said that the Davis case, in which a black man was shot and killed because a white man thought his black music was too loud, was not about race. This kind of political illiteracy shows how and why we need what I call a critical racial discourse. As Boston Governor Deval Patrick said—“words matter.” Even more than words, the radical left—and, yes, I include communists– gave us examples of a powerful resistance. The Rosa Ingram case and the Trenton Six—which were also about racial violence inflicted on blacks– were fought in the courts, in the streets, and in African American artistic production. When Rosa Ingram was sentenced to death along with her two sons for killing a man she claimed had violently assaulted her, the left and civil rights groups organized the protests that eventually freed them, and, as part of that protest, artist Charles White made the Ingram case the subject of his 1949 drawing.

MHW: Well, one way to answer that is to look at the art of Charles White, the subject of the second chapter in The Other Blacklist, and the one visual artist in the book. His images of Frederick Douglass, John Brown, Sojourner Truth, and Harriet Tubman are some of the most powerful and aesthetically beautiful representations of black history. Though White’s art in this period was largely social realist, he was also experimenting with modernist formal devices as you see in the Cubist stylization in the enlarged eyes and hands of his figures. But what may have been his most modernist contribution was his commitment to a black cultural aesthetic that insisted on depicting “the most African-looking, the poorest, and the blackest people in our ranks—those furthest from the country’s standards of success and beauty” (72). For all the creative artists in The Other Blacklist, politics and art were inseparable, and, since White represents that collaboration visually, it is easy to see that intersection. Especially in the Rosa Ingram drawing, where White represents the strength and defiance of these figures along with their sorrow and suffering.

Q: Almost every kid in the classroom reads A Raisin in the Sun as her one black text or To Kill a Mockingbird as a text about racial issues. How does The Other Blacklist challenge students to move beyond their comfort zones?

MHW: Let’s begin with some of the texts I discuss in The Other Blacklist: Lloyd Brown’s 1951 novel Iron City, Alice Childress’s 1989 novel Those Other People, her 1966 play Wedding Band, Frank London Brown’s 1959 novel Trumbull Park and Julian Mayfield’s 1960 novel The Grand Parade. If high school students were reading Wedding Band, they would hear a black woman and a white man, who love each other, trying to confront the almost intractable difficulties of an interracial relationship, not because of their personal failures but because of the structures of white racism. Trumbull Park would give them another side to the “integration” story, not an easy or optimistic story about residential segregation, but one in which black families move into a housing complex in Chicago and are greeted with sustained mob violence, even from people in the local church. This would be a great alternative to the easy ending of Raisin in the Sun. Rather than focus on black victims, Iron City shows three black radicals, imprisoned for their radical activity, who organize to get a new trial for a black man on death row falsely accused of murder. In the best spirit of left radicalism, Childress expanded her radical critique to include sexuality, and in Those Other People, she takes a group of black and white high school students and shows how they confront their anti-gay biases and thus come to understand the intersections of race, class, gender, and sexual orientation.