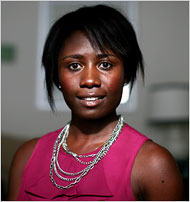 We were all very excited to see that “Black Hair, Still Tangled in Politics,” an article from yesterday’s New York Times featured a quote from our colleague Afua Adusei-Gontarz, an assistant editor Columbia University Press (pictured).

The article discussed the continuing debate among many African American women about whether or not to straighten their hair and the implications of that decision. The article sums up the the debate writing, “In the face of cultural pressure, the thinking goes, conformists relax their hair, and rebels have the courage not to. In some corners, relaxing one’s hair is even seen as wishing to be white.”

However, in interviews done for the article several women were wary of hairstyles taking on too much significance. Below is the passage that features Afua and her take on the debate:

Afua Adusei-Gontarz, 30, of Brooklyn, wore her hair natural for five years in a French braid, two-strand twists or a puffy ponytail. But she doesn’t think those looks made her more authentically black. “If you have natural hair, you’re considered more real, or in touch with your African-ness,” said Ms. Adusei-Gontarz, an assistant editor at Columbia University Press.

She rejects that thinking: In Ghana, her older relatives relax their hair — as she does now but for convenience — and “it’s more the newer generations who have natural hair.”