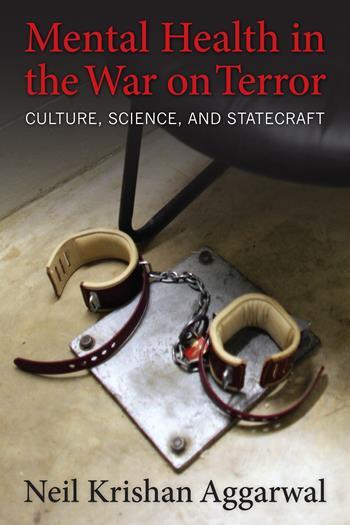 “We need novel solutions for hierarchical organizations such as the CIA and the armed forces that erect institutional safeguards for psychiatrists, psychologists, and whistleblowers warning of misuses in mental health knowledge and practice.”—Neil Krishnan Aggarwal

This week our featured book is Mental Health in the War on Terror, by Neil Krishan Aggarwal. Throughout the week, we will be posting content from and about the book and it’s author. Today, we are happy to repost an article on the Senate Select Committee on Intelligence’s report on American use of torture, written by Aggarwal and originally posted in mid-December.

Don’t forget to enter our book giveaway for Mental Health in the War on Terror!

The Senate Select Committee on Intelligence’s release of the report Committee Study of the Central Intelligence Agency’s Detention and Interrogation Program marks a signature moment for government accountability in the War on Terror. The report acknowledges that “the CIA’s use of its enhanced interrogation techniques was not an effective means of acquiring intelligence or gaining cooperation from detainees” and “the CIA’s justification for the use of its enhanced interrogation techniques rested on inaccurate claims of their effectiveness.”

Politicians have debated release of the report. Former Vice-President Dick Cheney has claimed that enhanced interrogation techniques were “absolutely, totally justified” and were the “right thing to do, and if I had to do it over again, I would do it.” In contrast, Senator Dianne Feinstein, committee chairwoman, defended the release: “Releasing this report is an important step to restoring our values and showing the world that we are a just society.” Similarly, President Barack Obama declared: “The report documents a troubling program involving enhanced interrogation techniques on terrorism suspects in secret facilities outside the United States.”

The Senate committee’s report reinforces this conclusion. After capture of militant Abu Zubaydah, a psychologist-contractor proposed in July 2002 that SERE (Survival, Evasion, Resistance and Escape) techniques from the American military could be “novel interrogation methods” for the CIA. These techniques include walling, facial holding and slapping, cramped confinement, stress positions, sleep deprivation, waterboarding, and mock burial. One CIA official clarified that “personnel will make every effort possible to insure [sic] that subject is not permanently physically or mentally harmed but we should not say at the outset of this process that there is no risk.” The psychologist-contractors normalized these techniques, responding, “The safety of any technique lies primarily in how it is applied and monitored.”

This brief example reinforces central themes in cultural studies of mental health. First, the psychological contractors developing enhanced interrogation techniques allied themselves with the interests of the state rather than socially undesirable populations – in this case, detainees. Ever since the Nuremberg trials publicized Nazi physician violations during World War II, health professionals have heeded the call to do no harm. This code certainly challenges health professionals treating enemies during war, but remains nonetheless operational. Second, many innovative mental health practices come from previous military experience. Some of our best treatments for Posttraumatic Stress Disorder and Traumatic Brain Injury come from experience with veterans. Mental health abuses can also emerge from the military such as SERE techniques for enhanced interrogations. This strengthens the case for why military and intelligence mental health professionals should resist doing harm during wartime.

Once the dust settles, I hope that our government interviews the brave intelligence officers and government officials who objected to psychologically enhanced interrogations. Invoking international treaties and precedents to prevent abuses from health professionals has not worked thus far. We need novel solutions for hierarchical organizations such as the CIA and the armed forces that erect institutional safeguards for psychiatrists, psychologists, and whistleblowers warning of misuses in mental health knowledge and practice. More soon.