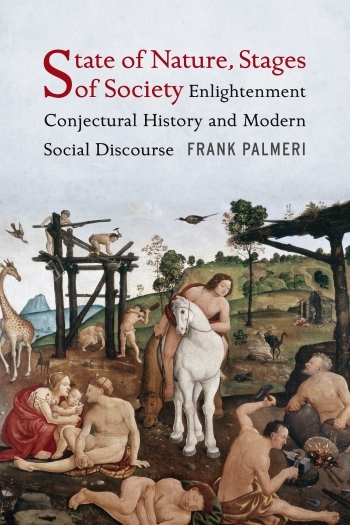 The following is a post by Frank Palmeri, author of State of Nature, Stages of Society: Enlightenment Conjectural History and Modern Social Discourse:

Conjectural Thinking in Oncology and the Classics
By Frank Palmeri

Conjectural history, beginning in the second half of the eighteenth century, sought to provide plausible accounts of periods for which no documentary or material evidence existed; it primarily depicted the earliest stages of society and the succession of those stages. Such speculative thinking enabled reconstructions of what might have happened in times about which no certainty was possible. In the nineteenth and early twentieth centuries, conjectural history provided a model for the early development of the social sciences, especially anthropology, sociology, and political economy.

Today, conjectural thinking is experiencing a resurgence in fields as diverse as oncology and the classics. It is proving more productive than the positivist and scientistic notion that either we have certainty through knowledge of facts, or we know nothing of the matter in question. The alternative is not belief, but speculation, conjecture, trial-and error.

For example, in a recent piece, Siddhartha Mukherjee discusses a movement in the treatment of cancer in the last decade that is turning away from the standard protocols of chemotherapy developed in the late sixties and seventies. These forms of treatment attacked each kind of cancer, depending on where it was first located, with a certain mixture of toxic, indiscriminately cell-killing drugs. Although most cancer patients are still treated that way, oncologists now realize that every cancer is characterized by distinctive marks, by an individual combination of gene mutations. They are increasingly seeing a need to find more discerning medicines, molecules that can attack the cancer and cut off its growth by various pathways.

The result, in Mukherjee’s words, as he reflects on his own practice and that of his colleagues, is chemotherapy by hunch or intuition. But such intuitions are not untethered from reality; they are based on probabilities, sequences, and patients’ previous responses. They are conjectural or speculative, although they are based on the best and only available evidence. In this sense, the practices of today’s oncologists are comparable to those of earlier conjectural historians from the late eighteenth to the early twentieth century—from Rousseau and Hume through Darwin and Freud.

According to Mukherjee, recognizing the necessary uncertainties in the treatment of unusual cancers brings him and others back to the practice of medicine more as a nimble, humbling, learning experience, an art, and less as the mechanical application of established and invariable protocols. On this view, the physician is now more aware of what he does not know (about each particular, individual cancer) and less aware of what we know (about a class of cancer in general and the chances of surviving it).

Similarly, in Beyond Greek: The Beginnings of Latin Literature, Denis Feeney makes interesting, problematic, and uncertain something that has been accepted as an unproblematic given for more than two thousand years: that the Romans developed their literature in imitation of the Greeks, adopting and adapting their genres of tragedy, epic, comedy, and history. Paradoxically, the military conquerors were conquered in turn by the culture of the conquered. Educated elite Romans were bilingual, and employed Greeks, even Greek slaves to educate their sons.

But, Feeney asks, why? And he meditates on the strangeness, the near uniqueness of a dominant culture adopting as its model the culture of a minority subordinate group.

Feeney speculates that in the mid-third century BCE, the Romans wanted to assert themselves culturally on the (Mediterranean) world stage. Greek literature and culture carried high prestige throughout the Greek-speaking world of the Eastern Mediterranean and beyond. Moreover, the epics of the Trojan War enabled the Romans to place themselves in world history—as descendants of heroic non-Greeks, the Trojans. Their military conquests of the Greeks after Alexander the Great allowed them to claim the cloak of empire and an identity as sophisticated and cosmopolitan—unlike their Oscan and Umbrian neighbors—and at the same time to reverse and avenge the loss of civilization suffered by their Trojan ancestors.

Feeney admits that his argument consists very largely of speculation. No documents from the time set out the reasons that led the Romans to start translating Greek literature, and over the course of the next few generations to adopt the generic system of the Greeks in order to construct their own literary tradition. Indeed, there could be no such documentary evidence. Like the phenomena typically studied by conjectural history—the earliest stages of society and the succession of those stages—such large social and cultural developments are not the result of individual conscious deliberation and planning in advance.

However, rather than leaving in silence or darkness such a significant development, which shaped all later Western history, Feeney speculates responsibly, formulating plausible conjectures and drawing inferences.

Both Mukherjee and Feeney push into areas, where we do not have certain knowledge, in order to examine phenomena that otherwise remain unexamined, unexplained, unquestioned—things accepted because that’s the way things are. They and others today in widely various fields are doing what conjecturalist thinkers have done since the 1750s.