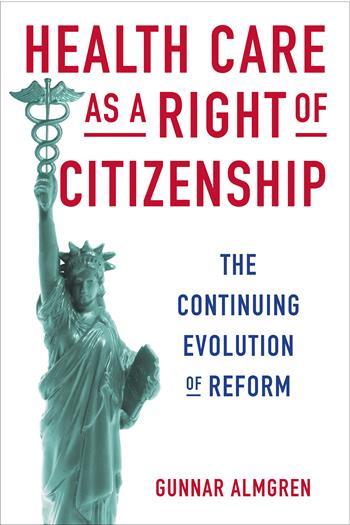 “I also do not believe that in historical terms the ACA will be seen as anything more than a politically pragmatic and necessary step toward the evolution of a social right to health care for all Americans.” — Gunnar Almgren

This is the first of a series of posts in which Columbia University Press authors look at the implications of the result of the 2016 presidential election. In this post, Gunnar Almgren, author of Health Care as a Right of Citizenship: The Continuing Evolution of Reform, looks at the future of the Affordable Care Act, perhaps better known as ObamaCare, under a Trump presidency:

The Future of the Affordable Care Act
By Gunnar Almgren

President-Elect Donald Trump described the Affordable Care Act (ACA) as a “total disaster,” yet many analysts would argue the opposite. In terms of its central aim of dramatically reducing the number of Americans without health insurance, the ACA has been a resounding policy success, and even surpassed the projections of the Congressional Budget Office (Congressional Budget Office, Insurance Coverage Provisions of the Affordable Care Act, April 2014, www.cbo.gov/publication/45231).

According to the Kaiser Family Foundation, in absence of the ACA, the numbers of Americans without health insurance coverage would have risen by 2015 to 54 million, or nearly two times the number of uninsured we actually have today. Further, the CBO now predicts that the ACA’s net costs to the federal government over the next decade will be $104 billion less than originally projected.

Nonetheless, it remains clear that with the election of Trump, and GOP majority support in both houses of Congress the ACA, in name if not in its most fundamental provisions, is in deep jeopardy. With this in mind, let’s consider the ACA in historical terms and then also in terms of the political economy of health care.

From the historical perspective, there are two plausible narratives that might emerge. The first narrative will define the ACA as a poorly conceived and ultimately failed expansion of the welfare state, akin to mainstream history’s appraisal of the Lyndon Johnson administration’s Great Society and War on Poverty social experiments of the 1960s. The second narrative, and in my opinion the more likely one, is that the ACA’s historical significance will not lie in its largely successful expansion of health care entitlements and insurance subsidies to millions of Americans, but rather in its affirmation by act of Congress of the idea that comprehensive health care must be available to all as a social right of citizenship. While previous acts of Congress sought to incrementally expand public and private health care insurance to the aged, poor, and the disabled, the ACA is unique in its embracement of universal health insurance coverage to all citizens as an explicit policy aim.

Although the conservative Congresses that followed the 2010 passage of the ACA have since endeavored to repeal it (and the hard right results of the 2016 elections might seem to guarantee such a repeal) what matters is that the mainstream American public now views access to affordable health care as crucial function of just and effective governance, and any proposed alternative to the ACA must be reconciled with that expectation. However the ACA might be redefined, repackaged , or even diminished–neither the key health care industry stakeholders (in particular the pharmaceutical , health insurance and hospital industries) nor the American public will tolerate a return to the 2009 pre-ACA regime of a failing employment-based insurance system, 49.6 million uninsured Americans, and an epidemic of safety-net hospital closures. Political rhetoric is one thing; economic and political reality is another.

While there are several reasons to predict the ACA’s survival, the penultimate reason in my view is the absence of a coherent conservative alternative that will not propel the nation toward the next catastrophic health insurance coverage crisis – a crisis that could result in truly radical health care reform that is an anathema to conservatism, namely universal social insurance for health care. It is this thought that keeps health insurance industry executives and investors awake at night. It should also be noted that under the ACA, the private health insurance industry on the whole has thrived –as happens when private industry markets are expanded by public fund subsidies.

In sum, I don’t share the view that the political resurgence of the GOP is synonymous with the demise of the ACA’s core provisions. Within two days of his election, Trump was already walking back from his campaign promise to repeal the ACA and now speaks in qualified and modest language about preserving such core provisions as retaining expanded insurance coverage to young adults and eliminating pre-existing condition protections.

I also do not believe that in historical terms the ACA will be seen as anything more than a politically pragmatic and necessary step toward the evolution of a social right to health care for all Americans. In the end, the basic policy strategy and structure of that ACA are substantially inadequate to such a task, both because of its inability to achieve universal health insurance coverage and because its substantive health- care provisions fall short of the equity and equality of opportunity requisites of political democracy. Such a platform can only built upon both social insurance for comprehensive health care and the resurgence of a national agenda to meaningfully reduce child poverty. These are the commitments that make a nation great.