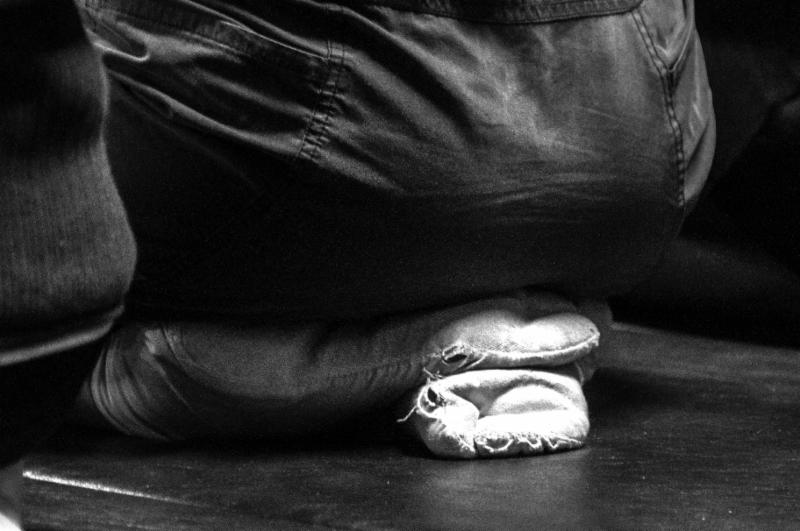 “To write this book, I had to become a beginner rather than an expert.”—Carrie Preston

The following is a post by Carrie Preston, author of Learning to Kneel: Noh, Modernism, and Journeys in Teaching:

To write this book, I had to become a beginner rather than an expert. I had to study an entirely new language (Japanese) and performance form (noh theater). The experience of becoming a student again—and often a poor student at that—taught me a good deal about being a scholar-teacher.

The ideal of the scholar-teacher emphasizes that research inspires great performances in the classroom. I remain committed to that ideal, but writing Learning to Kneel made me realize the need to develop strategies for making my research more accessible to my students. The book includes stories of my research process, various attempts to teach my scholarship, and also what my scholarship has taught me about teaching.

I originally intended to write a book called Noh Modernism (pun very much intended) about the ancient Japanese noh theater’s influence on early twentieth-century European and American drama, dance, poetry, and film. I decided to take lessons in noh performance technique because I was dissatisfied with previous scholarly accounts that suggested because W. B. Yeats, Ezra Pound, Bertolt Brecht, and other “westerners” were more interested in their peculiar ideas of noh than the reality of the theater, actual research into noh performance technique is unnecessary. The artists certainly mystified noh, but scholars were advancing that mystification of a “foreign” art form by refusing to do the work it takes to learn about noh. I realized that deep research on noh requires taking lessons in the form, so I applied for a grant from the Japan Society for the Promotion of Science that allowed me to become a visiting researcher at Hosei University in Tokyo. My hosts there helped me find a professional actor and master teacher who would take me on as a student.

In preparation for my time in Tokyo, I began taking Japanese language classes with undergraduates at Boston University. I found myself hiding in the back row, hoping that my professor would not ask me to come to the board to draw kanji characters. If my Japanese classes reminded me that learning something new can be scary, my noh lessons in Japan completely changed the way I thought about scholarship and teaching. Before each lesson, I had to fall to my knees before my teacher, or sensei.

As I bowed, I spoke the formulaic phrase, “Yoroshiku onegaishimasu,” which might be translated as “Thank you for your help and guidance now and in the future,” or, as a fellow noh student suggested, “Please be kind to me during this lesson.” I received instruction while kneeling in seiza, a position with buns on heels that I found incredibly painful after a few minutes but was supposed to maintain for a half hour while I practiced chanting. 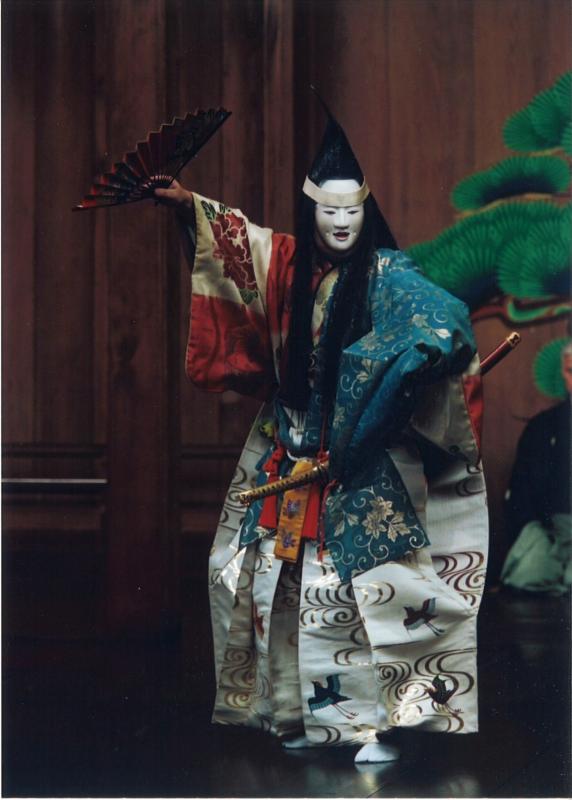 When I could finally stand up and move, a task I assumed would be more comfortable given my previous dance training, I had to suppress my tendency to insert my own individual flair. I found this to be extremely difficult, as I realized my training had written flair into my standard way of moving.

Kneeling, bowing, enduring pain, suppressing individuality and flair—it all initially seemed demeaning, especially in light of noh’s long history of excluding women from the professional stage, among other traditions of discrimination. My scholarship on noh seemed to be forcing me into positions (quite literally) that were antithetical to my work as a professor of English and Women’s, Gender, & Sexuality Studies. Whereas I was performing submission to the mastery of my sensei in noh lessons, I was committed as a professor to a pedagogy that broke down hierarchies between teacher and pupil. I taught my students in gender and sexuality classes about the power of subversion, questioning convention, and asserting their individual desires. Yet, I was spending a lot of time kneeling in pain and adhering to the strict pedagogical and performance traditions of noh. Noh lessons made me face my unexamined assumptions that an egalitarian pedagogy and what I might have called a “democratic” or “feminist” classroom is always preferable to a formal, even hierarchical, relation between teacher and student. The dash in my sense of myself as a scholar-teacher had become about conflict rather than conjunction in a way that was tremendously productive for me as a scholar and teacher.

Instead of feeling demeaned in my noh lessons, as I had expected, I took comfort in the gestures of deference that were part of my role as a noh student. These ancient ritual-like practices separated my lessons from the mundane world and offered me access to a space of distinction. By kneeling and bowing I acknowledged the expertise of my sensei, but I also learned to accept the misunderstandings and outright failures that are always a part of learning.

Rather than having to face those failures as an individual (and perfectionist), I recognized that my struggles – or spaces for them—were built into the structure of noh lessons. Adhering to the formal conventions of the lesson also helped me confront two very real risks of the research I had undertaken: The risk of forgetting that I am a western researcher gathering information about a “foreign” culture from a “native informant” (the standard dynamic of orientalism) and the risk of being a tourist out for an exotic experience. Noh lessons cast me as a student following the rules of—even kneeling before—an ancient and revered cultural tradition.

My noh lessons also reminded me that the styles of interaction between teacher and student are culturally specific. The informal way I interacted with my students is not necessarily more honest than the highly formalized way I addressed my sensei. In fact, my casual style might work to conceal the very real operations of power in the classroom along with the expertise of the professor and the reality of grades.

My lessons also exposed habits of mind or mental ruts that I had developed as a privileged American scholar. These included a tendency to celebrate subversions of authority and tradition and presuppose a very specific understanding of agency and freedom derived from western liberal humanism. Such assumptions do not define all the goals and desires of people around the world or even of my students and me. We tend to live and find joy in what Eve Sedgwick calls “the middle ranges of agency” rather than in constant and relentless subversion. There can be joy in submitting to a discipline and even in enduring pain like the ache of kneeling.

I don’t ask my students to kneel before me when they enter the classroom, as tempting as that might be. I do feel more comfortable claiming my expertise but also my lack thereof, including my struggles as a scholar and a teacher and the conflicts I experience between the two roles. I use my own example of Learning to Kneel to encourage my students to question the norms, habits of mind, and customs of our culture—often by studying other cultures.