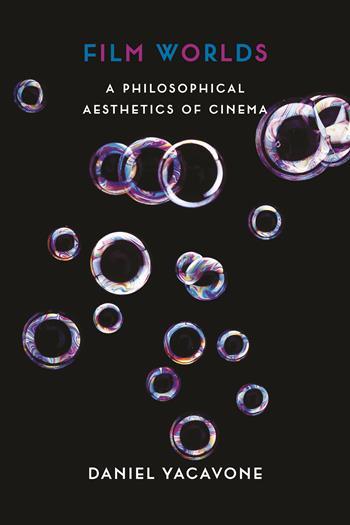 The following is an interview with Daniel Yacavone, author of Film Worlds: A Philosophical Aesthetics of Cinema:

Q: How would you situate Film Worlds within film theory and the expanding field of film and philosophy?

A: Over the past few decades there has been a notable turn towards philosophy in disciplinary film studies. One example is the influence of Gilles Deleuze’s writings on cinema (indebted to Henri Bergson and C.S. Peirce), which film theorists have found productive to engage with; another is the widespread interest in phenomenology – particularly Maurice Merleau-Ponty’s version of it – in relation to perceptual, affective, and ‘embodied’ aspects of films and film viewing. More or less simultaneously, within Anglophone academic philosophy there has been a renewed interest in how some films dramatize philosophical issues and problems, in the question of whether cinema can serve as a medium for philosophical thought and argument, and the relation between films and their experience and issues in the philosophy of perception, cognition, and emotion (as overlapping with cognitive film theory).

In relation to all of the above it is important to distinguish between philosophy in film and the philosophy of film. My interests have been mainly in the latter, and it is here that the long and fascinating tradition of aesthetics and the philosophy of art can be fruitfully brought to bear on certain topics in modern and contemporary film theory. Curiously, in the midst of the aforementioned philosophical turn in film theory and the growing ‘film-philosophy’ movement this is a tradition that many theorists and philosophers alike have tended to bypass, even when discussing cinematic representation, expression, authorship, and other issues that it may illuminate (there are of course notable exceptions). In its exploration of the world-like nature of films and their experience, Film Worlds attempts to show the continued relevance of insights drawn from general aesthetics and the philosophy of art to cinema and to contemporary film theory and the philosophy of film.

Q: More specifically, why conceive of films as ‘worlds’? Are there particular film theorists or philosophers – or philosophical traditions – that have inspired your approach?

A: The idea of a film being a created world in which viewers are perceptually, imaginatively, and affectively immersed is as old as critical reflection on film as a medium and as art. As well as film theorists and critics, many notable filmmakers – including David Lynch, Federico Fellini, and Andrei Tarkovsky – have consistently spoken of their films as such virtual worlds. Apart from cinema, the idea of an artwork as a constructed world of its own, in some sense, rather than a representation or form which merely reflects or mimetically reproduces ‘the world’ (defined in practical or empirical terms), goes back to the 18th century and the beginning of aesthetics as a distinct branch of philosophical inquiry. As I trace in the book, in the 20th century this idea branches off in a number of different directions – formalist, logical, narratological, phenomenological, hermeneutic. In analytic philosophy and in narratology, for instance, there is considerable interest in the ‘fictional,’ ‘imaginary,’ or ‘make-believe’ worlds of representational works (sometimes conceived as logically possible worlds), including those of films. Centered on artistic creation as a form of symbolic ‘world-making’ a very different conception of the worlds of art works is found in the writings of the American philosopher Nelson Goodman, as an integral part of his wider ‘cognitive pluralism.’ Within 20th century continental philosophy, the concept and theme of the artwork as both a represented and an expressive or affective world is central to Mikel Dufrenne’s compelling and under-discussed phenomenology of aesthetic experience, as it is in different ways in Martin Heidegger’s later thought and in Hans-Georg Gadamer’s hermeneutics.

In Film Worlds I attempt to show how aspects of these many conceptions of the worlds of art works may be productively applied to our experience and understanding of different aspects or levels of narrative films as profoundly leveled and multi-aspect perceptual, cognitive, and affective realities (or ‘worlds’). Moreover, through chains of direct and indirect influence, which the book follows, the ideas of well-known film theorists and philosophers of film – including Jean Mitry, Christian Metz, Gilles Deleuze, Pier Paolo Pasolini, V.F. Perkins, and David Bordwell – significantly overlap and intersect with one or more of these traditions of philosophical reflection on art and worlds. Although film theorists and historians such as Dudley Andrew have broached this subject it has to this point received little in-depth attention.

Q: Can you tell us a bit about your background and what attracted you to the combination of cinema and philosophy?

A: As an undergraduate I developed a deep interest in cinema, art history, and philosophy more or less simultaneously. I ended up designing my own interdisciplinary major combining all three subjects, and am grateful to Connecticut College and Amherst College for supporting this early intellectual ambition! When I came to the UK and studied philosophy (for a Masters degree) I specialized in aesthetics. Related to one of the main features of Film Worlds, and its consciously eclectic approach, I studied aesthetics and the philosophy of art in both the continental and analytic philosophical traditions, whereas one is often encouraged (if not forced), to pick a side and an allegiance. I found that in the case of aesthetics, and the best thought and writing, at least, these 20th century traditions and approaches to philosophical questions illuminated one another. In a continuation of my moving in and out of the disciplines in question, I pursued a PhD in film studies at the University Edinburgh (where I am now based), and was then awarded a postdoctoral research fellowship by The British Academy. This once again found me working in and through film theory and philosophy of art in both continental and analytic traditions, leading to Film Worlds. I am now institutionally at home in film studies and am pleased that it is a field which allows and, I would argue, actively requires, a good deal of interdisciplinary thought extending to philosophy among other subjects.

Q: The ‘continental’ and ‘analytic’ divide you refer to seems to be a deep one…

A: A lack of sustained dialog between the two camps, not just in academic philosophy, but in film theory and other fields is one of the great losses to 20th and early 21st century thought. Having said this, I certainly do not wish to deny or downplay its difficulties or its potential pitfalls. One way to begin, or to reinvigorate, such dialog is to meet on the shared ground of a clearly defined area and object of study. This is what I have attempted in Film Worlds with respect to cinema as art, and a set of inter-related issues such as the full symbolic dimension of cinematic representation, the types of feeling at work in film viewing, the different forms of temporality films possess, the dynamics of film interpretation, etc. These are topics which are of general concern to both continental and analytic theorists and philosophers of cinema.

Q: How does the new understanding of cinema as art that you propose through the concept of ‘film worlds’ relate to what is currently occurring in terms of the transition from celluloid to digital in filmmaking/viewing, and other technological developments?

A: I think that in a contemporary context one of the strengths of the framework I develop in Film Worlds is its pronounced non-medium and non-technological essentialism, specificity, and determinism. Since, that is, many significant aspects of the creation of film art (narrative and non-narrative) – and of film experience as aesthetic experience – powerfully and profoundly transcend differences in media and technology. In other words, the account of ‘film worlds’ I elucidate is intended to be applicable to all moving-image based art, be it celluloid, digital, or some composite of the two, as well as to both live-action and animated film. This is in contrast to certain so-called realist conceptions of cinema, past and present, and an ‘ontology’ of film that in one way or another privileges live-action, celluloid filmmaking and viewing.

Of course, and as addressed in the book, there are artistic potentials and different forms of ‘world-making’ open to creative filmmakers working with digital technology that are not possible in the case of celluloid film and vice-versa. (In some cases these lead to different types of experiences for viewers.) By and large I regard these differences as roughly akin to those among oil, watercolour, and acrylic paint, for instance – as different formats and ‘media,’ if you like – all of which still fall under the category of painting and its myriad forms and artistic uses. Particularly given the pronounced multiplication of media and formats for cinema allowed by new technologies, I think contemporary film theory and the philosophy of film can benefit from periodically stepping back and focusing on cinematic form, broadly defined: by which I mean ‘form’ as distinct from, but converging with, media and technology, rather than form as distinct from represented content (as I’m certainly not advocating formalism).

Q: What sort of audience do you envision for Film Worlds?

A: I hope that the book will be of interest to film theorists, and film scholars more generally, to philosophers of film and art in both the continental and analytic traditions, and to art theorists. The book’s more general discussion of ‘world theory’ also overlaps with recent work in the philosophy of culture, media studies (including the theory of video and computer gaming), anthropology, narratology, affect studies, cognitive psychology, and hermeneutics. Scholars in all of these areas might be interested in certain aspects of the book and its arguments.

Q: Do you have other writing projects on the horizon in film studies or the philosophy of film?

A: Yes, I’m currently working on a monograph on self-reflexivity in both its cognitive and affective dimensions within modern and contemporary cinema. It will build on some of the themes and concepts of Film Worlds. But it will also introduce a number of new categories and distinctions in a fundamental reconsideration of the forms and functions of reflexivity as a ubiquitous but surprisingly under-analyzed term and concept in film theory and film criticism. Whereas in Film Worlds the focus is very much on film theory and metatheory, together with philosophy, this study will feature more in the way of analysis of specific films and directors including, for example, David Lynch’s unofficial ‘Los Angeles’ trilogy, and the fascinating cinema of Jacques Rivette.