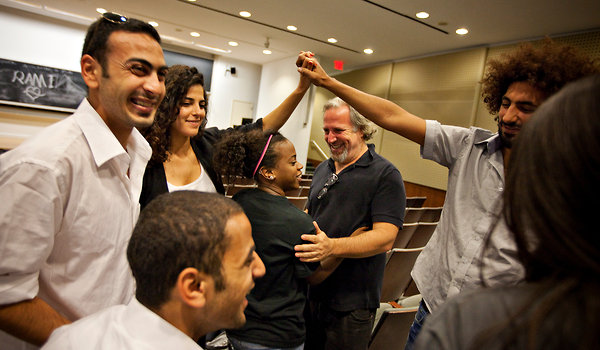 Last night, The Freedom Theater a troupe in the Jenin refugee camp, performed “Waiting for Godot at Columbia University’s Miller Theater. The play was directed by Udi Aloni, author of What Does a Jew Want?: On Binationalism and Other Specters. As described in a recent New York Times article, Aloni became the director after the founder of the The Freedom Theater, Juliano Mer Khamis was murdered outside the troupe’s building.

Udi Aloni, who had been Mer Khamis’s friend, decided to step in as director after learning of the murder. The production breaks with several conventions relating to “Waiting for Godot,” including the casting of women in the roles of Vladimir and Estragon. As BatoolTaleb, who plays Estragon, explains, “Waiting for Godot” has special resonance for Palestinians and The Freedom Theater: “Everyone in life is waiting, with his own goals to reach. For us in our situation in Palestine, we are waiting for freedom, and for us in the Freedom Theater, we are working for the future, waiting for something to happen that will change something.”