“The pan-Arab revolutionary unity of early 2011 has long since given way to sectarianism, polarization between Islamists and their enemies, and horror over the relentless images of death and despair in Syria, Iraq and Libya.”—March Lynch 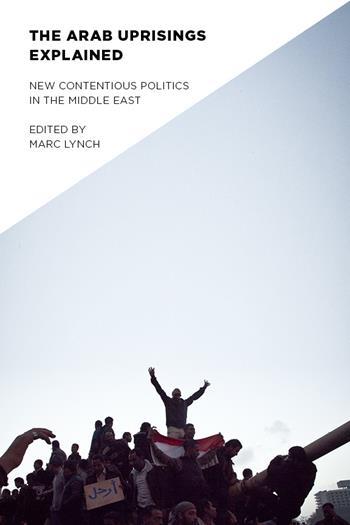 In The Arab Uprisings Explained: New Contentious Politics in the Middle East, edited by Marc Lynch, leading scholars and observers of the Middle East examine the causes, dynamics, and effects of the Arab uprisings. Marc Lynch discussed some of the conclusions from the book in a Washington Post blog post from this summer and also discusses the failure of political scientists to predict the uprisings in the first place.

In a follow up, Lynch examines how experts, including himself, responded to and analyzed events that occurred during the Arab Spring and its aftermath. Lynch’s article comes out of a recent study in which he asked the contributors to The Arab Uprisings Explained to write short memos assessing their contributions after having another year to reflect on what has transpired since they wrote their original pieces. (free PDF available here)

In summarizing the contributors critiques of their own work and their failures to understand some of the dynamics of the Arab Uprisings, Lynch writes:

We paid too much attention to the activists and not enough to the authoritarians; we understated the importance of identity politics; we assumed too quickly that successful popular uprisings would lead to a democratic transition; we under-estimated the key role of international and regional factors in domestic outcomes; we took for granted a second wave of uprisings, which thus far has yet to materialize; we understated the risk of state failure and over-stated the possibility of democratic consensus.

Lynch admits that he and his colleagues might have become “too emotionally attached to particular actors or policies. Caught up in the rush of events, and often deeply identifying with our networks of friends and colleagues involved in these politics, we may have allowed hope or passion to cloud our better comparative judgment. That’s a fine quality in activists, but not so helpful for academic rigor.”

Lynch also revisits some of his own positions and analyses from the past three years since the Arab Spring. Specifically, he looks at the destabilizing effects of U.S. and Allied intervention in Libya, an action Lynch initially supported. Lynch concedes:

It is impossible to look at Libya’s failed state and civil war, its proxy conflict and regional destabilization, and not conclude that the intervention’s negative effects over the long term outweigh the short-term benefits. Moammar Gaddafi’s fall, combined with the prominence of armed militias, left Libya without a functioning state and little solid ground upon which to build a new political order. The likelihood of such an outcome should have weighed more heavily in my analysis.

In discussing the Arab public or what he thought would be a new Arab public, Lynch writes that his hopes that a mobilized Arab population would not allow itself to be taken in by authoritarians once again have not been realized. In Egypt, the military coup won the support of those who had clamored for change during the overthrow of Mubarak and the military’s power was then consolidated in the public’s eye through the use of media. Lynch writes:

The new Arab media and social media proved to be just as capable of transmitting negative and divisive ideas and images as they had been at spreading revolutionary ones. Egypt’s military coup traveled just as powerfully as had its revolution. The pan-Arab revolutionary unity of early 2011 has long since given way to sectarianism, polarization between Islamists and their enemies, and horror over the relentless images of death and despair in Syria, Iraq and Libya.

Lynch concludes by looking back at his belief that the Arab uprisings would offer the opportunity for Islamists to be integrated into the democratic process. This, of course, did not sustain itself and has led to further divisions within the Middle East. Lynch explains what, in part, happened when Islamists took over:

The problem … was in the [Islamists’] struggles to adapt to a new, uncertain political environment in which victory was actually a possibility and a strategy of self-restraint and slow, patient social transformation no longer seemed appropriate. It also lay in the fears their success generated among everyone else, the inability of political systems to tolerate their ascendance, and the extent to which national and regional forces would go to block them from governing. Islamists proved less adept at governing than they had been in opposition, and the transitions paid the price.