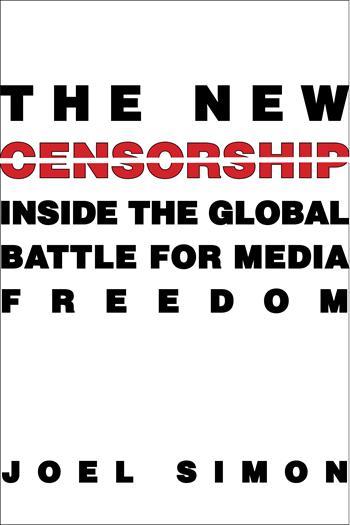 The following is an interview with Joel Simon, author of The New Censorship: Inside the Global Battle for Media Freedom. On November 11 at Book Court in Brooklyn, there was a launch for a book and a discussion with Simon and George Packer of The New Yorker. Packer later wrote about a commentary based on the book on Why the Press is Less Free Today. For more on the book you can also read an excerpt from the chapter News of the Future (and the Future of News).

Question: Why did you write this book?

Joel Simon: As always there were a mix of personal and professional reasons. From a professional perspective, I hope to draw attention to the crisis that we are confronting around global free expression. This is the most deadly and dangerous time for journalists in decades, with record numbers being killed and imprisoned. Around the world, according to all available data, press freedom is in decline and the information we depend on makes sense of our globalized world is not flowing as freely as people believe. I hope the book draws attention to this urgent threat, helps readers understand its origins and consequences, and to points toward strategies that can help mitigate the impact.

From a personal perspective, I have always loved to tell stories. This is in large measure why I became a journalist and since my day job is a running an international nonprofit it is not something I generally able to do. I greatly enjoyed the opportunity to take a step back, and consider the big picture, and sit, write, and contemplate.

Q: The book is called The New Censorship. How is this different from the old censorship?

JS: Traditional censorship is based on hierarchies of control. In its most rigid formulation, a country’s political leadership determines what people can know and state directives are executed by actual censors who occupy newsrooms and prevent the publication of prohibited material. In other words, people don’t know what they don’t know. This kind of censorship is anachronism in a globalized, networked world in which even autocratic regimes have to integrate into the international financial and information systems. So unless you want to ban the Internet—something only a handful of countries do these days—you need to find a way to manage information rather than relying on simple repression. In the book, I look at a variety of strategies focusing on new breed of elected autocrats who I dub the “democratators.” I look at the Chinese system for managing the Internet, and also explore the way that terror and criminal groups are using social media to disseminate message of fear and intimidation.

Q: You use this term, global citizen. What do you mean by that?

JS: One of the primary themes I explore in the book is the way that technology has transformed the global information system, including the global media. I use the term global citizen to represent all those who recognize that their interests transcend national boundaries. In order to make informed decisions about matters that affect their lives, global citizens require access to global information. It is true that technology makes it possible to access information from around the world in ways that would have not even been conceivable a few decades ago. But the glut of information blinds us to the huge gaps in our knowledge of global events, gaps produced by pressure from authoritarian governments, murderous violence perpetrated by criminal and terrorist groups, smothering surveillance of our online communication, and clear deficiencies in the media structures. By definition censorship itself transcends national boundaries, since it prevents people from outside the country where the censorship is taking place from accessing information that may be essential for their own lives. One of the primary arguments for press freedom in a national context is that it necessary for good governance and accountability. But there is no effective mechanism to ensure that news and information produces accountability at the global level.

Q: Can you describe your background?

JS: I worked for a decade as a journalist in Latin America covering Mexico, Central America, and Cuba. I worked as a freelancer and because I couldn’t compete with the staff correspondents in terms of access I made a specialty of reporting on the lives of average people, visiting shantytowns and dusty villages. This gave me a deep appreciation for what advocacy journalism in which I sought to use reporting to address pressing social issues. In 1997, I published a book, Endangered Mexico, which looks at Mexico’s environmental crisis and the impact it was having on the country’s people.

That same year I took a job at the Committee to Protect Journalists as the Americas program coordinator. A few years later I became deputy director and in 2006 executive director. The New Censorship draws on my experience both as a journalist and a press freedom advocate.

Q: What is the audience for this book?

JS: I do hope it will reach a broad audience of journalists, international affairs specialists, academics, human and press freedom activists, and average readers who care about global events. While the issues are inevitably complex, the book itself is very accessible. I’m a journalist by profession and I’ve been true to the journalistic maxim: “Show, don’t tell.” I’ve drawn on my own experience as a correspondent in Latin America and a press freedom advocate to illustrate my points, and I’ve interwoven stories of brave frontline journalists like Adela Navarro Belo, editor of the weekly Zeta in Tijuana and Marlene Garcia-Esperat, a crusading investigative reporter from the Philippines whose 2005 murder has never been solved.