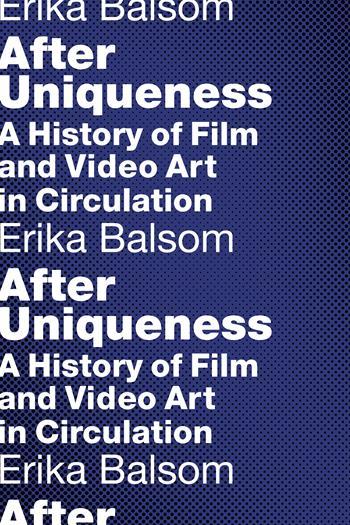 “Digital dissemination is often described in terms of freedom and ecstatic mobility. And yet it is absolutely imperative to recall that new forms of circulation have been matched by new forms of control.”—Erika Balsom

The following is a post by Erika Balsom, author of After Uniqueness: A History of Film and Video Art in Circulation:

December 19, 2016 marked the inaugural broadcast of Keimena, a weekly program of artists’ film and video on Greek public television station ERT2. Curated by Hila Peleg and Vassily Bourikas as part of the forthcoming Documenta 14, Keimena will air Mondays at midnight until September 18, 2017. Why broadcast artists’ film and video on television as part of a major international art exhibition? A look at Keimena reveals that the project engages both with the shifting distribution ecologies of contemporary moving-image art and with the specific context of Greek public television in a time and place of austerity measures.

This summer, Documenta 14 will take place not only in its usual home of Kassel, Germany, but also in Athens, where the exhibition will renew the social mandate that undergirded its founding in 1955. In Greece, Documenta’s task will be less to engage with the aftershocks of a traumatic past, as it was in postwar Kassel, than it will be to confront the ongoing contradictions and crises of a neoliberal present.

Keimena explores the notion of broadcasting as a public good and the possibilities of disseminating moving-image artworks beyond the contexts of the cinema and gallery. What unites the selection of works is an engagement with political actuality, often in a loosely documentary idiom. In the relationship between Keimena’s form and content, then, is an implicit assertion that the moving image, tied as it is to mass circulation, has a special purchase on questions of collectivity, public experience, and popular struggle.

Keimena follows in the tradition of earlier initiatives for showing artists’ film and video on television, such as The Eleventh Hour (1982–88) and Midnight Underground (1993, 1997), series shown on Channel 4 in the United Kingdom in similarly late-night time slots. Though the home is often deemed a less-than-ideal venue for cinematic spectatorship, these initiatives embrace television due to its capacity for widespread dissemination, bringing difficult-to-see works to potentially vast, diverse, and geographically dispersed audiences. Moreover, they attempt to marry this unprecedented access to enhanced possibilities of accessibility by including introductions that contextualize and enrich the viewing experience. Keimena’s broadcasts feature brief introductions by commissioned writers, texts that the curators claim “are as much as integral part of the programming effort as the films themselves.”

It might seem strange to turn to television as a means of mass dissemination in the age of the internet. Haven’t we moved from an age of broadcasting to an age of narrowcasting? In the case of Keimena, however, the recent problems of the Hellenic Broadcasting Corporation (ERT) endow the project with a specific urgency. In June 2013, the ERT’s three channels were abruptly taken off-air, putting some 2500 employees out of work and filling Greek televisions with a black screen. The government cited financial problems, calling the ERT a “haven of waste.” The closure of Greece’s national public broadcaster led to widespread protests; eventually the ERT reopened in June 2015 with the support of Alexis Tsipras’s anti-austerity Syriza party, which had formed a new government in January of that year. In collaborating with the ERT, Keimena foregrounds the role and fate of non-commercial institutions at a time when public support for the arts seems everywhere in jeopardy.

Moreover, just as television providers have in recent years ventured into online delivery, so too does Keimena include a digital component, with its films available for streaming at http://webtv.ert.gr. Digital dissemination is often described in terms of freedom and ecstatic mobility. And yet it is absolutely imperative to recall that new forms of circulation have been matched by new forms of control. This is especially true in the case of artists’ film and video, an area of practice with close ties to—if not full residence inside—the symbolic and financial economies of art, which continue to place a high value on authenticity and uniqueness. If Keimena followed in the footsteps of Midnight Underground in embracing broadcast television, in its use of the internet it follows the recent initiative www.vdrome.org, a curated website exhibiting a single moving-image artwork for a limited duration of time, usually ten days. Why so short? In part, it functions to endow the work with the urgency of liveness; watch now because it will soon be gone. But there is also a very different reason at play: without the limitation, many artists would not allow their works to be shown. Keimena’s films are available to stream for only seven days following each broadcast and are geo-blocked to visitors with IP addresses outside of Greece. On the Documenta website, one can find the introduction for each film and a brief clip with the proviso, “Due to copyright reasons only a short segment of the film can be shown here.”

The transmission of moving-image art on television and for limited durations on the internet asserts mass dissemination as a primary goal. And yet, Keimena’s embrace of access is coupled with temporal and geographical restrictions. In this regard, it offers crucial insight into the tensions between rarity and reproducibility, scarcity and abundance, that mark the history of the circulation of artists’ film and video, tensions that figure today more strongly than ever. While digital forms of reproduction have enabled unprecedented possibilities of circulation, within the artistic context this promise tends to be either rejected wholesale or, as in Keimena, embraced only on the condition that traditional systems of symbolic and financial value are not jeopardized.

Keimena is absolutely exemplary of the ambivalence of the reproducibility of the moving image as it operates within the sphere of art. In this initiative, we glimpse a deep investment in the democratizing potential of film and video qua reproducible media, a potential that has for decades been so key to so many artists. But we also glimpse the persistent attachment to rarity that governs the circulation of the moving image within the art system. In between the two, something of the peculiar character of the moving image as a medium of artistic practice becomes visible.