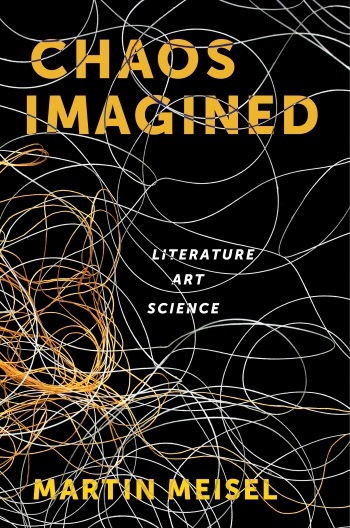 This week, our featured book is Chaos Imagined: Literature, Art, Science, by Martin Meisel. Today, we are happy to present a guest post from Meisel in which he discusses the origins of the massive undertaking of researching and writing Chaos Imagined.

A Reflection
By Martin Meisel

Sometimes I am asked how I came to write this book, one that strays so far from the umbrella of my credentialed competence. It happened after publication of an earlier book called Realizations: Narrative, Pictorial, and Theatrical Arts in Nineteenth-Century England. My editors, the formidable Miriam Brokaw and Jerry Sherwood, then with the Princeton University Press, asked me, “Well, what’s next?” I really didn’t know. But like most scholars I had a file of bright ideas that I might want to follow up one year or another, and I offered some of those: a book on Dickens, about whose imaginative superabundance and uses of plot as symbolic instrument I had a lot to say (“Yes, go on.”). One on Ben Jonson’s plays, whose comedic brilliance delighted me. Something on prediction in literary studies (“Interesting.”). A book on the theater of professions—journalism, medicine, law, politics, the clergy, theater, the military. A book on Sean O’Casey’s plays, which I had been teaching (and acting, from the podium) with great relish (“Uh huh. And?”). A book on the idea of “chaos” and its attempted representations—the obverse, so to speak, of the usual premise in the history of ideas, not to say the study of cultures and societies, where an investigator typically sought to elicit “cosmos,” that is, ideas of order, as in the Elizabethan (or Tobriand Islander) “World Picture.” It had struck me, moreover, that imagining and representing the extreme of disorder—chaos—had a history. The “shape” of chaos varied, not only from place to place, but, even in our own evolving culture, over time. “Do that!” said my editors in chorus. “All right,” I replied, being of indecisive character and grateful for firm guidance, though tenacious, indeed stubborn, once I had come to decision. A decision is too valuable an achievement to forego.

The trouble—which turned out to be the reward—was that this project demanded at least some competence in areas where I might have general knowledge, but neither depth nor expertise. So it embroiled me, not just in research, but in education—educating myself in myriad matters, like mathematical notation in ancient Greece, rival schools in ancient philosophy, subjects and approaches in art history, thermodynamic theory and its development, history of warfare, philosophy of science, literature in languages I couldn’t read. As a scholar, I have always had a fear—a sort of death’s-head presence in my preconscious—of turning into a version of the Reverend Mr. Casaubon, the dry-as-dust scholar in George Eliot’s Middlemarch, engaged in a work called “The Key to All Mythologies,” designed to prove that all mythologies were corruptions of the true nature and history of things to be found in the Holy Bible. The trouble in his case, apart from the hubristic ambition of his project, was that he was ignorant of the language and scholarship of contemporary philology and biblical criticism, not to say archaeology, much of it in German. And here was I, with a project of similar scope and ambition, and with any number of manifest deficiencies. And then in the end—even if I were to rise to the challenge—there was the threat of what one might call the imitative fallacy: writing a book about chaos that was itself chaotic. For with so uncontainable a subject, where so much that seemed relevant turned up around every corner, the end result could be hash, a potpourri with neither structure nor standpoint, rhyme nor reason. In that case, thought I—as time passed, and I detoured sporadically into other projects, but always came back to this one—I will have had the pleasure of nosing about in so many fascinating, exotic, and sometimes forbidding locales, the pleasure I hoped to bring to my students every day: of learning.

And so here is the result—Chaos Imagined—only made possible, I suspect, by what I have managed to leave out. I hope its readers will also find some pleasure in it, and some enrichment of the kind it gave so abundantly to me.