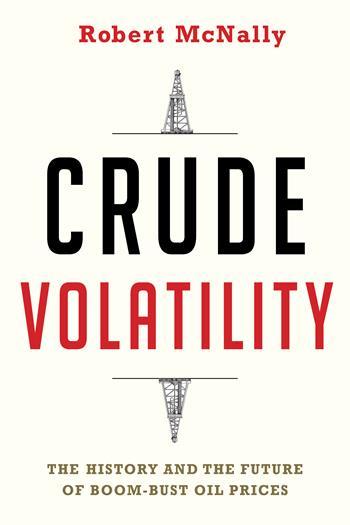 “While it is possible the unmanaged interplay of supply and demand will yield more stable prices in coming years and decades, it is more likely future trends will resemble the past, featuring surprising shifts, sustained imbalances, and upheaval.” — Robert McNally

This week, our featured book is Crude Volatility: The History and the Future of Boom-Bust Oil Prices, by Robert McNally. Today, we are happy to repost an article by Robert McNally that “>originally appeared in the Financial Times:

Boom and bust returns as oil market loses its swing: For the first time in years, the global oil market is lacking a swing producer
By Robert McNally

Even in these hyper-partisan times, loathing for Opec still unites most Americans. Yet paradoxically, over four decades from the early 1930s to early 1970s, the United States was Opec, and much better at oil supply manipulation and price fixing than today’s Opec ever was.

Up until 1972, independent US oilmen and oil states like Texas acquiesced to heavyhanded government regulations over oil, imposing monthly quotas on producers. This was all done to vanquish chronic booms and busts that vexed the oil industry, consumers, investors, and officials.

This paradox bears directly on the epic, structural shift currently under way in the global oil market, with far-reaching repercussions not only for oil and energy, but also economic growth, security, and the environment. Wildly gyrating oil prices over the past decade mark the demise of Opec as an effective supply manager and the return of free crude oil markets. The resulting unwelcome and likely protracted return of boom-bust oil prices constitutes a major and under-appreciated financial, economic, and geopolitical risk to consumers, businesses, the incoming administration and governments worldwide.

Since 1859, oil prices have tended toward booms and busts because supply and demand responded slowly to price changes and storage was finite and costly. To increase stability, governments and producers, the first being Standard Oil Trust, sought to control how much oil gushed from the ground. But after Standard Oil’s break-up in 1911, boom-bust prices returned for two decades, tormenting the oil industry as well as officials, since oil had become a strategic transportation commodity.

A massive price bust in 1931 prompted Texas and Oklahoma governors to send troops into oilfields to shut wells. Afterwards, with the support of both the conservative oil industry and the liberal FDR Administration, oil states like Texas imposed mandatory quotas well-by-well, field-by-field, for 40 years. These superstrict quotas produced a four-decade “Texas Era” of unparalleled price stability which ended in 1972 when slowing US supply and increased nationalisation in the Middle East enabled Opec to become supply manager and price fixer.

Opec achieved some success stabilising prices, but never matched Texas’ achievement. Opec’s reign withered and died about 10 years ago when oil prices began their wild rollercoaster ride, first up to $145 in 2008 and then down to $26 last February.

Texas and Opec quotas both aimed to stabilise near-term prices and anchor perceptions of long-term prices so the industry — and everyone who depended on oil — could plan and invest. Oil remains civilisation’s lifeblood and price stability is of paramount importance. Boom-bust oil price cycles reduce planning horizons, deter investment in machinery and equipment, and increase unemployment. Extreme price fluctuation complicates monetary policy, induces global downturns, and can trigger war and terrorism.

The price bust since 2014 has, like other price busts before it, elicited calls from the US oil patch for supply controls. Before the November 2016 Opec meeting, Continental Resources’ chief executive and Trump adviser, Harold Hamm expressed hope that Opec would cut supply and keep prices in a band. After the meeting, Oklahoma Governor Mary Fallin, who in October called for a day of prayer for the state’s ravaged oil sector, said that Opec “finally” cutting production was “welcome here in Oklahoma”.

Some believe recent pledges by Opec and Russia to restrain production mark the return of supply management. Hardly. Since these producers began talking about restraint last February, they added around 1.4m barrels per day to the glut. Their recent pledges to trim production from historically high levels resemble ad hoc, collective supply restraint agreements that sprang up occasionally since oil’s earliest days by producers spooked by price busts. They sometimes enjoyed temporary success but invariably fell apart due to supply growth outside and cheating within members’ ranks. Opec’s own analysts, and those at the US Energy Information Administration, project these pledges will not dent the towering inventory glut.

While it is possible the unmanaged interplay of supply and demand will yield more stable prices in coming years and decades, it is more likely future trends will resemble the past, featuring surprising shifts, sustained imbalances, and upheaval. The prolonged absence of a swing producer should force oil prices to gyrate between the busts needed to plug wells (well below $30 per barrel) and demand-rationing, if not recessionary booms, to well above $100. Leaders will desperately grasp for solutions. They should avoid mistakes like price controls, import tariffs, or throwing in strategic stocks. Better options include promoting resilience and transparency by improving data, fostering well-regulated, expanded financial markets, and weaning the oil industry and consumers off subsidies.

The oil industry and its investors must adjust capital planning cycles, operations, and strategy — expect to see more integration and storage — to boom-bust oil price cycles. With no swing producer on the horizon, coping with the mixed blessing of an unmanaged oil market will require consumer, corporate, and policy ingenuity and innovation. Welcome back to boom-bust.