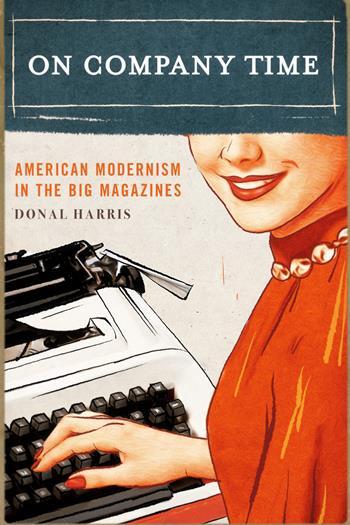 The following is an interview with Donal Harris, author of On Company Time: American Modernism in the Big Magazines. In the book, Harris tells the story of American modernism from inside the offices and on the pages of the most successful and stylish magazines of the twentieth century, looking at the careers of writers such as Willa Cather, W. E. B. Du Bois, Jessie Fauset, James Agee, T. S. Eliot, and Ernest Hemingway.:

Question: How did your interest in journalism begin?

Donal Harris: My first white-collar job during and after college was at a local weekly newspaper. I started as a reporter and feature writer, and I eventually served in just about every possible capacity: copy editor, section editor, page designer, managing editor. I even made a couple (unsuccessful) advertising calls. I was better at some of those jobs than others, but they showed me that producing a paper every week is exhausting, exhilarating work that requires a special approach to reading and writing. It also exposed me to the wide range of work that gets lumped under a term like “journalism.”

Q: How did the literary element come in?

DH: That begins with James Agee, who wrote a Pulitzer Prize-winning novel, A Death in the Family, and co-authored an extremely strange book about Alabama sharecroppers, Let Us Now Praise Famous Men. Famous Men explicitly denounces how newspapers and magazines represented the plight of poor folks during the Great Depression, so I was surprised when I discovered that the original idea for the book was assigned to him as a story for Fortune magazine. Fortune was published by Time Incorporated, at the time the largest media company in the United States, and it turns out that Agee worked at Time Inc. in some capacity for most of his adult life. On Company Time, at least in part, began as my attempt to make sense of how Agee’s and other writers’ (including Willa Cather, Ernest Hemingway, W. E. B. Dubois, and T. S. Eliot) day jobs fed into their attitudes about “serious” writing outside of work.

Q: But Agee deeply resented working for Time Inc., right? Is that a common theme in the writers you discuss, that they disparage their experiences in journalism?

Donal Harris: We’d miss a lot of what’s interesting about the intersection of journalism and literature in the twentieth century if we took the writers at their word.

Agee did often badmouth Time Inc. and especially Henry Luce, its co-founder. But Agee also often bragged about how good he was at the job, and how generous the company was in regards to pay (and paid leave). While digging through his files at the University of Tennessee, I found an office memo, on Time Inc. letterhead, that touted a cover story Agee wrote as the ideal piece of Time writing. I think it says a lot about his relationship with Time that, first, the memo exists and, second, that he saved it.

Your larger point is valid, though. Agee’s showy anti-journalistic stance is one note in a long chorus about the terrible effects of journalism—or more generally “mass culture” writing—on literary writing. Journalism is commercial so it privileges sensationalism; it’s presentist so it doesn’t understand history; it’s focused on information, so the style is boring. It’s worth noting that the feeling of superiority works the other way, too. There are obvious claims one could make about the “usefulness” of journalistic work and writing – journalism is the fourth pillar of democracy, right? But, in the period I cover, there are also a number of arguments about the superiority of journalism’s style. It strives for clear and transparent language, while novels and poems in the early twentieth century are often purposefully difficult.

Q: So what are the “big magazines,” and how are they different than other kinds of periodicals?

Donal Harris: Big magazines, for me, are commercial magazines that stake their financial success on creating a unique style rather than containing unique content. For me, McClure’s, in the 1890s, is the first one to do this in the U.S. Today, we assume that each magazine has an idiosyncratic perspective: we call it a “house style.” When you pick up the New Yorker or Wired or whatever, you know the articles will all sound a certain way, be a certain length, adopt a certain political or cultural position. That consistency is part of what subscribers count on, it is what keeps them buying a title.

But this attitude about what a magazine should look and sound like wasn’t always the case, and the opening chapters of On Company Time show how this model gets established. It starts as a sporadic experiment in different areas of print for different reasons, so I look at The Crisis in the 1910s, Time in the ‘20s, Esquire and Life in the ‘30s and ‘40s. They are very different genres of magazine, but they all stake their commercial success on developing a unified editorial voice rather than publishing the most sensational content. And fortuitously for me, these magazines also share the practice of hiring novelists and poets as their editorial staff.

Donal Harris: Yes, absolutely. Modernist art and literature is far more often associated with little magazines, which were anti-commercial and, by definition, didn’t seek a wide readership. For awhile, the motto of The Little Review was “Making no compromise with the public taste.” Recently, quite a bit has been written on organs like Blast!, The Little Review, transition, and others, which were often founded and staffed by experimental writers and first published some of the key texts from the period. In fact, T.S. Eliot first published The Waste Land in England in the first issue of his own magazine, The Criterion, which in many ways was intended bridge the gap between a little magazine and a more traditional intellectual journal. I owe a lot to the people studying these magazines, so my title is a nod to their work. At the same time, I wanted to explore the field of mass-market magazines as equally interesting, complex, and relevant for understanding modernist literature. Both in terms of modernism’s creation, and its reputation.

Q: Your book ends in the early 1950s, but I wonder what you think about how the Internet and the increasing prominence of digital publication have changed the relationship between journalism and literature.

Donal Harris: Well, there are certainly still examples of novelists and poets getting paid to write content for magazines. I end On Company Time comparing Michael M. Hastings’s posthumous novel The Last Magazine with Colson Whitehead’s career. As Hastings’s title suggests, he’s fairly pessimistic about the effects of digital media on all kinds of writing. And I think it’s fair to say that the kinds of reliable, good-paying, well-respected editorial jobs that sustained many of the authors in the early part of the twentieth century simply don’t exist in the numbers they used to. Part of that has to do with digital media, but it also has to do with larger trends in workforce management: what gets called “casualization” or the gig economy. Which isn’t to say that there aren’t still interesting print or digital magazines who hire fledgling novelists and poets to craft their editorial voice. Just that the field is smaller, more dispersed, and less handsomely compensated.

But I also talk about the career trajectory of Colson Whitehead, who I think most people would describe as an exceptionally successful novelist, seeing as how The Underground Railroad is on the short list for the National Book Award. Whitehead got his start in the ‘90s at the Village Voice, a job he says introduced him to the publishing networks of New York and taught him to concentrate on writing for long stretches of time. And his breakout novel, John Henry Days, is about a freelance journalist who is trying to navigate the new world of digital publication. Then after writing a handful of novels, he returned to reporting, writing several long pieces on the Olympics and the World Series of Poker for the now-defunct sports culture website Grantland.

Maybe that’s a long way of saying that new media technologies and working conditions re-balance the relationship between journalism and literary writing, but that its part of a much longer history. My book certainly tries to make that case. Paraphrasing Archibald MacLeish, journalism and literature occupy two ends of the same typewriter – which might need to be updated to keyboard – so it’s almost intuitive to compare the fields. My approach has always been to make sense of how institutional forces effect styles and genres of writing rather than judge those forces as good or bad.