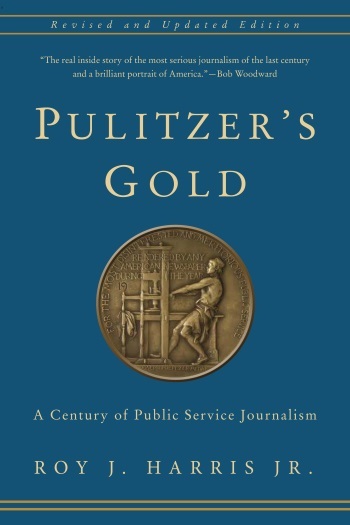 With today’s announcement of the Pulitzer Prize winners, we are re-posting our interview with Roy Harris, author of Pulitzer’s Gold: A Century of Public Service Journalism. Recently Roy Harris previewed some of the possible winners and was interviewed by WBUR’s All Things Considered on the 100th anniversary of the awards.

Question: 2016 is the 100th anniversary of the Pulitzer Prize. In looking over the winners for public service journalism, what struck you most about what has changed in journalism during this period and what has stayed the same?

Roy J. Harris: What’s very clear is how the quality of the Pulitzer winners—the depth of the reporting and the powerful change they brought about—increased sharply after the first few years the prizes began to be awarded. That suggests that the very creation of a system for honoring top-notch journalism encouraged more great reporting to be done around the country. But also, the variety of the top journalism projects—a diversity greater in public service than any other category—began to expand during that century: another major change. What’s stayed the same is that the predominant characteristic of the winning reporting has been tenacity on the part of the journalists to tell a story that others don’t want told.

Q: In recent years, there has been a lot of talk about how changes in the news industry are threatening the kind of journalism that the public service journalism prize highlights. What is your sense of the future for investigative journalism of this kind?

RJH: First the positive view: A surprising number of young journalists continue to enter the profession; they’re learning quickly, and doing great work. They also seem to value the tradition of great reporting, as I learn from the students I speak with regularly. While the digital world makes it harder to determine real news from the chaff, budding reporters also find that the Internet greatly broadens their access to valuable, verifiable resources. On the negative side, the news infrastructure to support reporters financially is seriously failing. New structures—like those created by new online sites and by privately supported programs like ProPublica and California Watch—aren’t coming online quickly enough to make up for the deterioration of traditional newspapers. New sources of financial support must be found for public service journalism, which is often the most expensive kind, if these young reporters are to be kept on the job.

Q: Much like the justly celebrated new movie, Spotlight, your book tells the story behind the story—about how journalists do their jobs. What is the value for general readers of understanding the ways in which journalists and the news industry work?

RJH: Before Spotlight, I argued that the behind-the-story approach of the Watergate movie All the President’s Men was a great model. Both that great movie and Spotlight are realistic, and take an inspirational look at what the media can do for our citizenry. And both concentrate on projects that won the Public Service Pulitzer—the subject of my book. I found in my research that less-well-known winners offer the same kind of excitement, though perhaps on a local level rather than a national or global level. That applies to non-journalists as much as to journalists, although the result of the journalism may be more local or regional than the ousting of a U.S. president or the exposure of a global Church scandal. From researching the stories in Pulitzer’s Gold I also found that to trace these Pulitzer winners through the years is to expose readers to the twists and turns of American history over the decades. What happened historically is important as is the role of the First Amendment, which keeps our system strong, and our citizenry informed.

Q: Speaking of Spotlight, I know you have been writing about the movie and will be doing a book event with Marty Baron, who was the editor at The Boston Globe when it broke the story about priest sex abuse. What are some of the key lessons to be learned from their work that is not conveyed in the movie? How do the reporters themselves think about their work being remembered in this way?

RJH: The power of journalistic teams is one of Spotlight’s great lessons—a lesson that often gets too little attention when we try to understand how journalism operates. My book is dedicated to giving more detail about how reporting teams work in general, including in the Globe’s case. My hope is that viewers who like the movie will love how Pulitzer’s Gold tells even more about the Globe’s great work. In addition to the value of teammates, with their varied talents, styles and views, the backstory of the Globe shows how much a pair of fresh eyes, like Marty Baron’s, as the editor, can mean to a news organization’s mission. Another lesson is the importance of framing the story properly while reporters work on it. In this case the proper framing was to look at wider story of the Church and its cover-up, rather than the behavior of one priest, or several priests. Finally, in nearly all these winning stories, tenacity on the part of the reporters and editors is a constant. The Globe reporters themselves are thrilled by the attention that’s been thrust on their story-of-a-lifetime. For the benefit of the victims of abuse, and for the benefit of citizens who now see this high level of team reporting, dramatized, these stories of press public service bring great value.

Q: The book covers some of the “big” stories of the past 100 years—Watergate, the NSA spy scandal, 9/11, the Depression, Vietnam, etc. Many of the award-winning stories come from big-city newspapers such as the New York Times and the Washington Post but many also come from smaller papers. What do some of these small-city papers offer that might not be found in the big papers?

RJH: The lessons from small-city news organizations are some of the most powerful, and plentiful, in the book. Reporters at smaller publications are often much closer to the problems they write about. That closeness gives them greater access and knowledge about a situation—but it also makes them more vulnerable to people who don’t want the story told. To name one case, the 2015 winners at Charleston, South Carolina’s Post and Courier methodically illustrated in their stories why so many women in their state were killed by their husbands or lovers—mostly by being gunned down. The reporters’ ability to meet survivors and track down the reasons behind the statistics made the story authentic. In just one more example, the small weekly Point Reyes Light in West Marin County, California, won a Public Service Pulitzer in 1979 for reporting on the armed Synanon cult located just miles from the office, and from the remote home of the editor. The danger involved with their reporting was brought home when Synanon members attacked an attorney who opposed them in court by putting a rattlesnake in his mailbox.

Q: On a related note, in what ways does your discussion of American journalism over the past 100 years provide new ways of understanding the history of America during this period that we might not get in a conventional history?

RJH: In doing my research for the book I was fascinated to find how often some period in U.S. history was reflected perfectly by the story that won the Public Service Pulitzer each year. The Boston Post won in 1921 for exposing financial charlatan Charles Ponzi for a crooked scheme so typical of the get-rich-quick Jazz Age that was just getting started. During the Depression, a small North Dakota newspaper won for brilliantly capturing the causes of the Dust Bowl, and pointing out intelligent ways that a repetition could be avoided. And in one case, an anti-pollution story won the Pulitzer years before the environmental movement caught on. That was the St. Louis Post-Dispatch, in 1941, which managed to get local industry to turn away from high-sulfur coal that was filling the city’s air with smoke. And, of course, the Washington Post’s 1972 Watergate coverage and the Catholic Church scandals the Boston Globe uncovered in 2002 made history, as well as reflected history. It’s encouraging to see that news organizations want to use extraordinary reporting methods to expose problems and make a difference in their communities. That’s the stuff of history.

Q: Finally, do you have a favorite prize-winning story or one that you think best exemplifies what the public service prize represents?

RJH: I especially love the David-and-Goliath type—like what the Point Reyes Light did in the Synanon case. In another terrific example, the Philadelphia Inquirer’s Gilbert Gaul took on abuses in the “blood industry” managed by the American Red Cross, winning the Pulitzer in 1990. Gaul got the idea for exploring the story while he was giving blood at a local blood drive, and realized that he didn’t know anything about how blood distribution worked. Or the case of Washington Post reporters Dana Priest and Anne Hull, who learned of horrific conditions at Walter Reed Medical Center, which was treating veterans wounded in Afghanistan and Iraq—and broke a story in 2007 that surprised and embarrassed the government, and led to quick reforms. Still, I often say that choosing a favorite story is like choosing a favorite child; you just can’t do it. As a citizen, though, it’s hard to ignore Pulitzer-winning stories that resulted in widespread national or international change. That certainly was true of both the Post’s Watergate reporting and the Globe’s exposure of abuses in the Catholic Church.