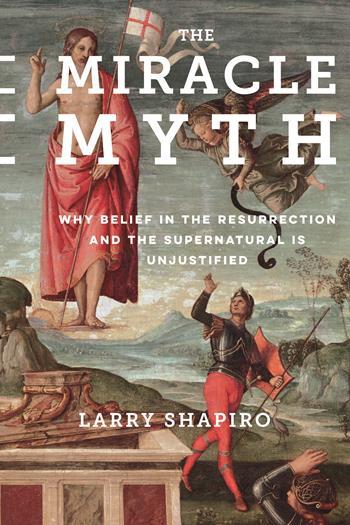 “How should one go about justifying belief in miracles? As the Vatican approaches this question, one must look for evidence that, first, some event has occurred for which there is no scientific explanation; and second, that the event occurred as a result of prayer to the deceased candidate for sainthood. Philosophers have a name for the inference involved in this kind of search. We call it an inference to the best explanation.” — Larry Shapiro

This week, our featured book is The Miracle Myth: Why Belief in the Resurrection and the Supernatural Is Unjustified, by Larry Shapiro.

Don’t forget to enter our book giveaway for a chance to win a free copy of The Miracle Myth.

Nothing against Mother Teresa, whose elevation to sainthood seems as deserving as any, but I think a condition for sainthood – the performance of at least two miracles – is about as silly as they come. To understand why, let’s begin with a crucial distinction – a distinction between the existence of a miracle and the justification for believing in a miracle. Some event may have occurred and yet believing so could still be unjustified. Perhaps it rained on this date in Jerusalem two thousand years ago. Still, we are not justified in believing that it did. Why not? We lack any evidence for the occurrence. No archaeologist has discovered a scrap of papyrus on which was scrawled “Today, September XX, 16 a.d. in Jerusalem it rained.” Nor is there a record of testimony to the event. There’s simply no reason to think that it did rain in Jerusalem on this day 2000 years ago.

With respect to miracles, this distinction between an event’s occurring and justification for believing that the event has occurred plays out like this. Perhaps Mother Teresa did perform two miraculous healings. However, we may still ask whether anyone is justified in believing so. More specifically, we should wonder whether the investigators whom the Vatican assigned to research the case for Mother Teresa’s canonization were justified in their eventual belief that she had performed the miracles attributed to her. Obviously, if they were not justified, then their conclusions should be disregarded.

How should one go about justifying belief in miracles? As the Vatican approaches this question, one must look for evidence that, first, some event has occurred for which there is no scientific explanation; and second, that the event occurred as a result of prayer to the deceased candidate for sainthood. Philosophers have a name for the inference involved in this kind of search. We call it an inference to the best explanation. Everyone makes use of this sort of inference all the time. Here’s a mundane example. I open my front door in the morning and find a newspaper on the stoop. I didn’t observe how the newspaper came to be sitting where it is, and so if curious about this occurrence I might consider various hypotheses that could explain the presence of the newspaper. Perhaps it emerged from the ground like a sapling. Maybe it fell from the sky. Perhaps in an Ambien haze I left the house earlier, bought the newspaper, laid it on my front step, fell back to sleep and am now discovering the paper anew. Or, perhaps the newspaper carrier simply tossed the paper onto my step. Notice that every one of these hypotheses explains the presence of the newspaper. We employ inference to the best explanation when we choose from among the hypotheses the one that seems to do the best job of explaining how there came to be a newspaper on the stoop. Maybe there’s no Ambien in my medicine cabinet. I can rule out one hypothesis. There’s a roof over my stoop, so the paper couldn’t have fallen from the sky: I’ve ruled out another hypothesis. I’ve seen a newspaper carrier while out for early morning runs. This increases the probability of the last hypothesis.

This winnowing of potential explanations until ending up with the best one is run of the mill. It’s the stuff of countless detective shows, where the criminal investigator never saw the crime but through the collection of evidence is able to rule out some suspects and finally infer to the best choice among the remaining suspects.

But what happens if there is no best choice? What if the detective is left with two suspects, or ten suspects, who, on the existing evidence, are equally likely to have committed the crime? In such a case, the detective’s belief that it was suspect 1 who should be charged, or suspect 2, or suspect 10, is unjustified. There’s no basis (by stipulation) to prefer one suspect to the other. There’s no way to infer to the best explanation of the crime because there are several equally good explanations (suspect 1 stole the diamond, suspect 2 stole the diamond, etc.).

Unfortunately for the Vatican, miracle researchers face exactly the same kind of problem that confronts our discomfited detective. Let’s stipulate that the two people who Mother Teresa purportedly healed did in fact recover from terminal afflictions for which there is no known scientific cure. How do the researchers infer that the best explanation for the cures was the intercession of Mother Teresa? Other explanations do just as well to explain the cures. Here are some: extra-terrestrials have been listening in on people’s prayers and every once in a while they will use their advanced medical sciences to treat cases that seem hopeless from our relatively primitive perspective; in fact it was Satan who cured the victims and he did so because he knew of Mother Teresa’s modesty and knew that being canonized would cause her great discomfort (even given the pleasures of heaven); people’s prayers go directly to God’s ears and He cures the sick, and it’s just a mistake to think that the canonization-candidate had anything to do with the cure; science can explain how the terminally ill were able to recover, just not the science of today.

Obviously, some of the explanations I just offered are ridiculous, but that’s no reason to prefer the explanation of the patients’ recovery that involves Mother Teresa. Inference to the best explanation requires that one provide evidence that makes one explanation preferable to others. But what evidence makes it more likely that a deceased person interceded in the illnesses of two people than that an extra-terrestrial or Satan did so? Of course, it’s always possible to devise an explanation that fits the evidence just as well as some other explanation, but this fact causes more problems for the Vatican than it might in other contexts. There simply is no available evidence that can decide among the supernatural explanations I considered above. On the other hand, here’s something we do know. Centuries ago a nascent medical science could not explain the occurrence of epileptic fits, and so they were attributed to supernatural causes; likewise for many other afflictions that, today, we regard as completely natural. So, even if the scientific explanation for saintly healings is not presently forthcoming, I still regard science as the best prospect for such an explanation; and if a yet-to-be-developed science is not the best explanation, it’s certainly no worse than the miraculous explanation. And that’s all it takes to make belief in the latter unjustified.