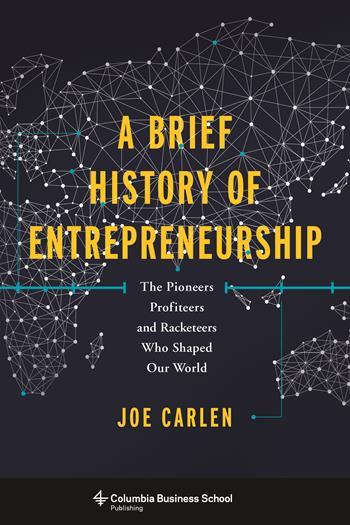 “To paraphrase Virgil, both fortune and misfortune tend to favor the bold. In other words, the surest route to avoiding misfortune is certainly not by starting one’s own business. Those who are motivated primarily by a fear of discomfort, uncertainty, and the like will find a safer way to earn a living. Of course, in many instances, such people will fare better economically over the long run than the perennial risk-taker. Nonetheless, those looking for the safe route are not likely to become entrepreneurs, successful or otherwise.” — Joe Carlen

This week, our featured book is A Brief History of Entrepreneurship: The Pioneers, Profiteers, and Racketeers Who Shaped Our World, by Joe Carlen. For today’s post, Carlen discusses the traits that are most commonly shared by successful entrepreneurs throughout history.

Don’t forget to enter our book giveaway for a chance to win a free copy of A Brief History of Entrepreneurship!

Rolling the Dice
By Joe Carlen

Ingenuity? Certainly, some of history’s greatest entrepreneurs, especially those of recent centuries, were distinguished by their ingenuity. Yet, many more, equally successful, were not especially innovative, at least in the technological sense. Moreover, some of the most creative ones – like Samuel Crompton, the brilliant industrial innovator who failed to adequately protect his intellectual property – never attained significant financial success. Meanwhile, even some of today’s largest technology companies were not founded on particularly original ideas. Rather, some are enterprises that grew out of tweaking existing concepts and promoting them far more aggressively and effectively than the original innovators ever did.

Charisma or “people skills”? Again, there are almost as many successful entrepreneurs with such qualities as those without them. In fact, the “lone wolf” personality, solitary and brooding, is not uncommon in this group. Neither is the cantankerous authoritarian who often inspires considerable resentment, even hostility, among staff members. Crassus, one of the most successful entrepreneurs of antiquity, preferred slaves over freemen because it was so well-suited to his authoritarian style. He liked bonded labor so much that even some of his accountants were slaves.

More recently, Andrew Carnegie, despite being the archetypal immigrant-entrepreneur and a great philanthropist, provides another example in this regard. In 1892, labor discontent at his steel mill in Homestead, Pennsylvania, grew so intense that it erupted into deadly violence. Certainly not to the same degree as Carnegie and Crassus, Steve Jobs, known for his willingness to go it alone and a temperamental management style, was also not a natural consensus-builder. If he was, his own board would not have ousted him from the company he founded in 1985. (Of course, ultimately, his other formidable gifts would far outweigh any deficiencies in that area.)

So, of the three initial answers to that question that surfaced for me, the one that remains is boldness. Especially when surveying entrepreneurs throughout history and across the world, there is probably no trait that is 100% universal. With such a large population in the data set, one can always find a few outliers. Yet, I believe that boldness is a near-universal trait among successful entrepreneurs as the act of entrepreneurship itself is, to some degree, a foray into the unknown.

In the English language, before the word of French origin gained currency, entrepreneurs were called “adventurers”. Personally, I prefer that older term as it is risk-taking in the form of economic adventures and not merely undertaking (the root meaning of entrepreneurship) that sets the entrepreneur apart from a host of other economic actors. The salaried manager of a manufacturing plant, for example, is undertaking various projects but that person has assumed relatively little personal economic risk. Meanwhile, the entrepreneurs who established that company took on considerable personal economic risk in the form of unpaid working hours, liability if lawsuits arise, and possibly personal debt incurred to finance the new enterprise.

To paraphrase Virgil, both fortune and misfortune tend to favor the bold. In other words, the surest route to avoiding misfortune is certainly not by starting one’s own business. Those who are motivated primarily by a fear of discomfort, uncertainty, and the like will find a safer way to earn a living. Of course, in many instances, such people will fare better economically over the long run than the perennial risk-taker. Nonetheless, those looking for the safe route are not likely to become entrepreneurs, successful or otherwise.

Consider the Mesopotamian, Phoenician, Arab, and Western European traders and colonists who carved out new routes for themselves, often in dangerous terrain and waters. Or, the Chinese tea merchants who invented paper money, even though many people had trouble recognizing the value of non-coin money. And, as nefarious as they were, the founders of the slave trade were certainly bold in the sense that it could be a very dangerous business, even for them. For example, d’Oliver de Montaguere, one of the directors of the French slave trade, was expelled from a West African kingdom and his agents were murdered when a deal went sour.

More positively, the entrepreneurs behind the expansion of the Internet and space tourism are pushing the frontiers of both of our virtual and physical space. These are highly disruptive enterprises powered in large part by a high tolerance for risk. They also require enormous persistence which, in my view, is closely related to boldness. After all, it is an act of boldness to persevere with no guarantee of a positive outcome.