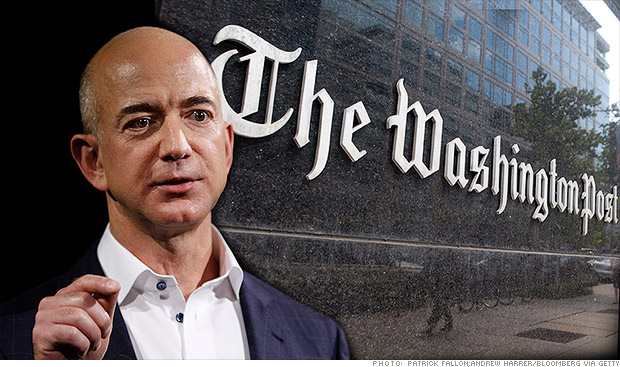 What did some of the editors of The Best Business Writing think about Jeff Bezos’s purchase of The Washington Post, which will surely be one of the biggest business and journalism stories of the year. The Audit, a feature on the Columbia Journalism site, published posts by Felix Salmon, Dean Starkman, and Ryan Chittum:

In his post Jeff Bezos and his journalists, Felix Salmon suggests that Amazon’s model which emphasizes efficiency might not be the best model for producing a great newspaper. While there has been some hand-wringing among journalists (not to mention those in the book industry) regarding Bezos’s purchase, Salmon is an admirer of the founder of Amazon. To his credit, Salmon writes, Bezos has kept his eye on long-term value rather than short-term profits. Has it worked? As Salmon points out, “Amazon is now worth about $140 billion, or more than 500 Washington Posts — more, indeed, than the combined valuation of every single newspaper in the world, put together.”

However, what Bezos lacks, according to Salmon is “personal talent-management skills”. While Amazon’s focus on efficiency has made it one of the most successful companies in the world, it has not led to particularly good treatment of employees. Salmon writes, “[Amazon’s] employees are cogs in the corporate machine, and they are expected to work as efficiently as possible.” This attitude, Salmon suggests, is the wrong model for a great newspaper, which requires a publisher who will indulge his writers, spend money to find the best journalists, and reap the rewards of excellent reporting. Salmon concludes by writing:

To put it another way: the best proprietors are only happy when their journalists are happy. They throw resources at those journalists, and then the journalists smile, in their grumbly way, and waste a bunch of what they’ve been given, and ultimately produce wonderful content, which the proprietor can then turn around and monetize in one way or another. Bezos isn’t going to be like that, or at least I don’t think he will be. Still, I hope I’m wrong. Because if he does take an avuncular interest in whatever makes his journalists happy, then a man with his skills, and his resources, could yet turn out to be one of the most interesting and successful newspaper proprietors of all time.

As his the title of his post suggests, Independent Media, Dependent Media: Bezos, The Washington Post, and billionaires buying the press, Dean Starkman, who is also the author of the forthcoming The Watchdog That Didn’t Bark: The Financial Crisis and the Disappearance of Investigative Journalism, cites the recent trend of wealthy, very wealthy, individuals buying up newspapers. Jeff Bezos joins John Henry, who just bought The Boston Globe. Meanwhile, the Koch brothers are circling around The Los Angeles Times and there are rumors that soon-to-be-ex-Mayor Bloomberg has his eyes on the New York Times.

As Starkman and others have pointed out, the titan as newspaper publisher is nothing new. The history of journalism is littered with names like Hearst. However, these barons of old derived their wealth and influence from the newspapers themselves and the power of the press. Today, it’s a different story. Starkman writes:

In the new model, on the other hand, the press is not powerful in its own right. The titans’ power flows from elsewhere. The press is, in an economic sense, incidental to their wealth. Journalism under this new model is enveloped by, and dependent upon, interests far larger and quite different from its own.

The press, as we know, can be powerful, as Bezos himself has learned over the years.

But, under this new model, can it be really called independent?

Finally, Ryan Chittum, notes some possible scenarios that might result in Bezos’s purchase, asking whether he will run it as a business or philanthropy. Another possibility, however, is that the paper might become a megaphone for his libertarian views and the business interests of Amazon. Bezos, after all, does have “enormous political interests in Washington”.

Noting the fact that Bezos does not really need the money, he is likely to drop the paper’s experiment with a pay wall. Without having to worry too much about making money, might make Bezos be willing to make long-term investments in the paper. Bezos is also, as Chittum points out, the first “tech revolutionary” to own a newspaper, which might help him recruit good people from that world to help the newspaper. Chittum wonders if other people from the tech world will follow Bezos:

Will other Silicon Valley/Seattle billionaires follow Bezos into the journalism game? It has to be awfully tempting when you can pick up an institution like the Washington Post for chump change. And if they can figure out a business model or subsidize journalism in the absence of one, they can repair some of the massive collateral damage their businesses have unleashed on how we fund serious public-interest journalism.