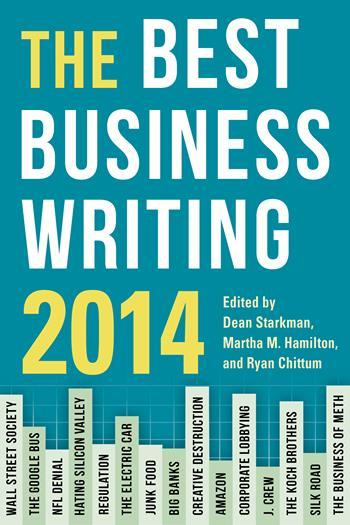 As a business the National Football League continues to make a lot of money. However, as revealed in The Best Business Writing 2014, edited by Dean Starkman, Martha Hamilton, and Ryan Chittum how the NFL does business is deeply troubling. This year’s anthology includes two stories about some of football’s recent travails and its more deceptive practices.

The first is a transcript from a Frontline story “League of Denial” that examines how the NFL reacted or did not react to the football concussion crisis. The excerpt and clip tell the tragic story of Mike Webster, a former all-pro center for the Pittsburgh Steelers.

The second, “How the NFL Fleeces Taypayers”, by Gregg Easterbrook from The Atlantic examines how the league, which has been able to receive non-profit status, has built its multi-billion-dollar empire on the largesse of politicians and taxpayers (see excerpt following the transcript).

A clip from “League of Denial”:

Narrator: Nearly broke, homeless, and losing his mind, Web­ster decided football had hurt him, and the NFL was going to pay for it. In 1997, he went to see a lawyer.

Bob Fitzsimmons, Webster’s attorney: The thing that struck me the most was how intelligent Mike was, and the problem was that he just couldn’t continue those thought patterns for longer than a thirty-second period, or a minute or two minutes. He would just go off on the tangents at that point. It was pretty obvious, actually, the first interview that he had some type of cognitive impairment.

Narrator: Attorney Bob Fitzsimmons drew up a disability claim against the NFL.

Steve Fainaru: He began to assemble a case with Webster to basically say that Webster had suffered brain damage as a re­sult of his seventeen-year career in the NFL.

Bob Fitzsimmons: So I took the binder of records and got four doctors together, four separate doctors, all asking them, “Does he have a permanent disability that’s cognitive? And is it related to football?”

Narrator: Webster’s final application for disability contained over one hundred pages and the definitive diagnosis of his doctor—football had caused Webster’s dementia. His claim for disability was filed with the National Football League’s re­tirement board.

Narrator: From the beginning, the league’s board was skepti­cal, reluctant to give Webster money.

Colin Webster: They were fighting it from the beginning, against just the common sense of, you know, here’s this guy, look at him, you know? He played for nearly twenty years in a brutal and punishing sport, and you know, this is what’s going on with him. Why would you fight that? What possible motive?

Narrator: The league had its own doctor review Webster’s case.

Bob Fitzsimmons: The NFL had not only hired an investigator to look into this, they also hired their own doctor and said, “Hey, we want to evaluate Mike Webster.”

Mark Fainaru-Wada: Dr. Westbrook concurs with everything that the four other doctors have found and agrees that abso­lutely, there’s no question that Mike Webster’s injuries are football-related and that he appears to be have significant cognitive issues, brain damage, as a result of having played football.

Narrator: The NFL retirement board had no choice. They granted Webster monthly disability payments.

Document: —“has determined that Mr. Webster is currently to­tally and permanently disabled.”

Narrator: And buried in the documents, a stunning admission by the league’s board—football can cause brain disease.

Document: —“indicate that his disability is the result of head injuries he suffered as a football player.”

Bob Fitzsimmons: The NFL acknowledges that repetitive trauma to the head in football, football can cause a permanent dis­abling injury to the brain.

Narrator: The admission would not be made public until years later, when it was discovered by the Fainaru brothers.

Mark Fainaru-Wada: And that was a dramatic admission back in 2000. And in fact, when you talk about that later with Fitzsimmons, he describes that as the sort of proverbial smoking gun.

Narrator: It was now in writing. The NFL’s own retirement board linked playing football and dementia. At the time, it was something the league would not admit publicly. And Webster felt he’d never received the acknowledgment that his years in the NFL had caused his problems.

Pam Webster: Mike would call this his greatest battle. He’d say it was like David and Goliath, over and over, because it was. He was taking on something that was bigger than him. He took on this battle for the right reasons. He was the right per­son to do it. Unfortunately, it cost us everything.

From “How the NFL Fleeces Taxpayers,” by Gregg Easterbrook:

The insertion of professional football leagues into the definition of not-for-profit organizations was a transparent sellout of public interest. This decision has saved the NFL uncounted millions in tax obligations, which means that ordinary people must pay higher taxes, public spending must decline, or the national debt must increase to make up for the shortfall. Nonprofit status applies to the NFL’s headquarters, which administers the league and its all-important television contracts. Individual teams are for-profit and presumably pay income taxes—though because all except the Green Bay Packers are privately held and do not disclose their finances, it’s impossible to be sure.

For Veterans Day last year, the NFL announced that it would donate cash to military groups for each point scored in designated games. During NFL telecasts that weekend, the league was praised for its grand generosity. The total donation came to about $440,000. Annualized, NFL stadium subsidies and tax favors add up to perhaps $1 billion. So the NFL took $1 billion from the public, then sought praise for giving back $440,000—less than a tenth of 1 percent.

In the NFL, cynicism about public money starts at the top. State laws and IRS rules generally forbid the use of nonprofit status as a subterfuge for personal enrichment. Yet according to the league’s annual Form 990, in 2011, the most recent year for which numbers are available, the NFL paid a total of almost $60 million to its leading five executives.

Roger Goodell’s windfall has been justified on the grounds that the free market rewards executives whose organizations perform well, and there is no doubt that the NFL performs well as to both product quality—the games are consistently terrific—and the bottom line. But almost nothing about the league’s operations involves the free market. Taxpayers fund most stadium costs; the league itself is tax-exempt; television images made in those publicly funded stadiums are privatized, with all gains kept by the owners; and then the entire organization is walled off behind a moat of antitrust exemptions….

Perhaps it is spitting into the wind to ask those who run the National Football League to show a sense of decency regarding the lucrative public trust they hold. Goodell’s taking some $30 million from an enterprise made more profitable because it hides behind its tax-exempt status does not seem materially different from, say, the Fannie Mae CEO’s taking a gigantic bonus while taxpayers were bailing out his company.

Perhaps it is spitting into the wind to expect a son to be half what his father was. Charles Goodell, a member of the House of Representatives for New York from 1959 to 1968 and then a senator until 1971, was renowned as a man of conscience—among the first members of Congress to oppose the Vietnam War, one of the first Republicans to fight for environmental protection. My initial experience with politics was knocking on doors for Charles Goodell; a brown-and-white Senator Goodell campaign button sits in my mementos case. Were Charles Goodell around today, what would he think of his son’s cupidity? Roger Goodell has become the sort of person his father once opposed—an insider who profits from his position while average people pay.