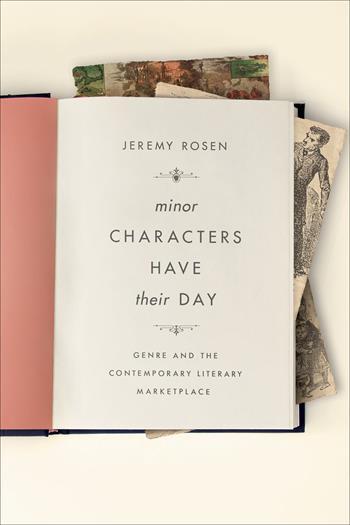 “Genre is more than just a publishing category or marketing device…. Genres reflect the concerns of the historical moments in which they flourish. Minor-character elaborations reflect the interest of readers and writers in revisionist histories, in new angles on old stories…. They also demonstrate the playful, mischievous attitude toward the classics … [and] the sense that the classics aren’t simply there to be worshipped, but are books that we can take over, play with, and remake in whatever way we see fit.”—Jeremy Rosen

The following is an interview with Jeremy Rosen, author of Minor Characters Have Their Day: Genre and the Contemporary Literary Marketplace:

Question: What got you interested in contemporary novels that convert minor characters from classics into protagonists?

Jeremy Rosen: It started when I heard about Lo’s Diary by the Italian novelist Pia Pera, which retells Vladimir Nabokov’s Lolita from the young girl’s perspective. Lolita is one of my all-time favorite novels, and I was intrigued but also a little skeptical about this retelling. I was in graduate school at the time, and taking a class on postmodern novels that included stuff like Jean Rhys’s Wide Sargasso Sea, which focuses on Rochester’s first wife, the so-called “madwoman in the attic,” from Charlotte Brontë’s Jane Eyre.

And then, just like the new word you learn and then start seeing everywhere, books featuring formerly minor characters started popping up everywhere I looked. Wicked the Broadway musical based on Gregory Maguire’s novel premiered around this time. And Alice Randall published her novel The Wind Done Gone, which imagines that Scarlett O’Hara from Gone with the Wind had a half-sister who was a slave. Then Geraldine Brooks won the Pulitzer in 2005 for March, which makes a protagonist of the absent father from Louisa May Alcott’s Little Women, and I could go on and on… What I realized was that I was seeing a vibrant phenomenon unfold, a genre that was “blowing up,” before my eyes, and I wanted to try to explain why that was happening.

Q: So why are so many contemporary writers focusing on minor characters from classics?

JR: When I tell students, and friends, and other people I meet about this research, they often say a couple things: that there must be no new ideas left, and that what I call “minor character elaborations” sound just like spinoffs and sequels in film. And I think these are right to an extent, but they don’t tell nearly the whole story. First, because seen from a certain angle, there have never been any new stories. From what little we know about Homer, he just wrote down and standardized what were already very old oral tales when they came to him. And the Greek tragedists like Sophocles and Aeschylus were likewise working with and transforming already ancient material. Rewriting, or what literary theorists call “intertextuality,” is really the oldest game in town.

On the other hand, some new things are happening here. Rewritings that focus on minor characters, especially on women and other socially marginalized groups, certainly have a new emphasis. Sena Jeter Naslund’s Ahab’s Wife, for example, takes the extremely masculine world of whaling and says: where were all the women? Naslund picks up on the single line in all of Herman Melville’s Moby Dick that mentions that Ahab was married. (And you think your partner has some bad moods!) Naslund takes that line and expands it into a grand narrative about what it would have been like to be the wife of a sea captain, who is at sail for years at a time, in the nineteenth century. A great many of these novels reflect a contemporary concern for the kinds of people—women, servants, slaves, non-Europeans—that were not often protagonists in classic literary works, in response to the wealth of stories we have that focus on the experience of white, male, upper class heroes.

Q: But you also suggest that there’s some merit to the comparison to Hollywood sequels and TV spinoffs, right?

JR: Absolutely. I chose the admittedly clunky term “minor character elaboration” because these books seem to me to differ from “spinoffs” in some important ways. When contemporary novelists seize on a minor character, we tend to get a picture of the character that is totally different than the brief glimpse we got in the classic. But when Joey from “Friends” gets his own show, we don’t suddenly find out that Joey was a much deeper, much more interesting person than we ever thought when we watched “Friends.” We just get more Joey.

That said, I think a lot of the forces driving the explosion of “minor character elaborations” are closely connected with the reasons we see such a rage for sequels and spinoffs in Hollywood, as well as all the “genre” films and TV shows out there: all the vampires, superheroes, zombies, and fantasy worlds. These phenomena all have a lot to do with transformations in media, in the publishing and film industries, which have undergone a major consolidation in the past several decades. The multinational media corporations that control much of the publishing industry like to minimize their risk. And totally unique books that have no connection with prior works are tough to explain and market. Whereas, “Like Harry Potter but sexier!” conjures up something we all know. Rewritings of classics tap into a known quantity, as well as prestigious literary names. And they have a genre formula that is easy to encapsulate in a few words: “Shakespeare’s King Lear from the court jester’s perspective!” (This describes Christopher Moore’s hilarious, bawdy novel Fool.) In the economic context of contemporary media consolidation, publishers have found familiar authors and genres to be reliable ways of grabbing readers’ attention.

Q: This is what the subtitle of your book, “Genre in the Contemporary Literary Marketplace,” addresses?

JR: For sure. In the book, I take pains to argue that genre functions in several ways at once, ways that aren’t easy to separate. So genres are partly marketing categories, and publishers push certain trendy genres all the time. Look at all the mash-ups like Pride and Prejudice and Zombies or Abraham Lincoln, Vampire Slayer, that have appeared lately. Then there were all the novels about disappearing women that surged after Gone Girl, or all the books about the love affairs of famous men.

But genre is more than just a publishing category or marketing device. As I said earlier, genres reflect the concerns of the historical moments in which they flourish. Minor-character elaborations reflect the interest of readers and writers in revisionist histories, in new angles on old stories, in particular on the experiences of women and other socially marginal people. They also demonstrate the playful, mischievous attitude toward the classics that we see in Pride and Prejudice and Zombies, the sense that the classics aren’t simply there to be worshipped, but are books that we can take over, play with, and remake in whatever way we see fit.

Finally, but not least importantly, genre also functions as a kind of variable recipe for authors. It’s a model that can be borrowed and imitated, but also one that is subject to constant innovation. We sometimes think of a genre as getting old or stale, but then new authors come along and breath fresh life into it, do something with it that reveals new possibilities that were there all along, just waiting for the person who was creative or audacious enough to take the genre in some new direction.

Q: Do you have a favorite minor character elaboration?

JR: You know, it’s tough to pick a favorite because new ones keep coming out all the time. This is one of the exciting but challenging aspects of working on really contemporary stuff. The series name, “Literature Now,” is, for my book, very literal. One recent book that I really enjoyed was Jo Baker’s Longbourn, which focuses on the servants from Jane Austen’s beloved Pride and Prejudice. It’s like Jane Austen meets “Downtown Abbey.” You can see why it’s eminently marketable, but it’s also very well written and well executed. Baker truly picked a perfect premise, because the servants represent such a conspicuous absence in Austen’s novels. Here are all these wealthy country manors, and we know someone is doing all the labor, but we never see who. Needless to say, being a servant around 1800 was no picnic. But Baker manages to go past just how miserable the job was, and create compelling stories for these figures who were almost completely absent from Austen.