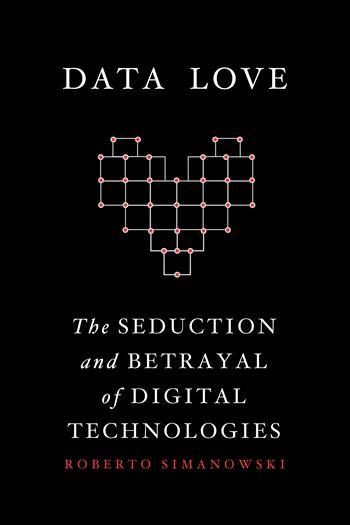 “[Data Love] does not reduce arguments over big data mining to the enemy-logic of ‘citizen vs. state’ but discusses data love as an expression of an undoubtedly fundamental but — bizarrely —insufficiently noted reorganization of society—a ‘quiet’ revolution initiated by software developers and implemented by way of algorithms; a revolution that, on the one hand, is subject to the drives of technological potential while, on the other, is reacting to the end of social utopias within a model of society dominated by consumerism.” — Roberto Simanowski

This week, our featured book is Data Love: The Seduction and Betrayal of Digital Technologies, by Roberto Simanowski, translated by Brigitte Pichon, Dorian Rudnytsky, and John Cayley. Today, we are happy to present a Q&A with Simanowski, in which he outlines his book project and the importance of questions about our love affair with data.

Don’t forget to enter our book giveaway for a chance to win a free copy of Data Love!

Why is data love the most troubling love affair of our time?

The love of big data has affected us all and is, without a doubt, the most entrancing and troubling love story of the twenty-first century. For better or worse and for many reasons, we happily choose to participate in the big data universe. We don’t worry much about data protection if we get something for less or even for free; we easily trade privacy for the narcissistic thrill of Facebook’s sharing culture. We can hardly wait for our fridge to talk to the supermarket and our calendar to converse with our car or house. That the conversation among “smart things”—that GPS, check-ins, or whatever sort of self-tracking device we use —are a data miner’s dream doesn’t deter us, we want it anyway and are convinced we can no longer live without it.

Why are surveillance and dataveillance impulses of modernity?

Data love is not only a sign of obsessive behavior by overzealous intelligence agencies and governing authorities, the economy has caught the bug, too, along with the sciences and a significant proportion of the population. Measurement, motivated by rationality, is a grand project of modernity: “A hill whose height remained unknown was an insult to the intelligence”, wrote Alexander von Humboldt, summing up the Enlightenment’s quest to know everything. With Freud, the craving for knowledge penetrated deep inside human beings. Was there any reason to think it would stop there? Wasn’t the next step inevitably society itself, its most hidden feelings and subtle ramifications? It is measurement of the social realm that now promises us knowledge, progress, better customer service, and an easier life.

Why are we the victims of our own success?

“Yes we scan,” read a poster at one of the rare protests following the NSA scandal. The twist is revealed by reading it alongside the Obama slogan to which it refers: “We scan because we can.” But we deceive ourselves if we think the “we” can be narrowly applied to intelligence agencies and the government as the only evildoers in this scenario. Insurance executives also scan their clients, corporations scan their customers and employees, and we scan our friends and potential spouses. Everyone gets taken advantage of by big data, and we all take advantage of it. How extensively is often only a matter of the available resources, and when we voluntarily offer up our data in exchange for a lower price or better service, the two roles are collapsed into one. All of us – this is the more profound anthropological implication of our political snap judgments – are victims of our own success, compulsive exploiters of our capacity to shape ever more new technological tools that finally shape us.

What is the book’s objective?

The book offers itself as a contribution to the debate on data protection. It does not reduce arguments over big data mining to the enemy-logic of ‘citizen vs. state’ but discusses data love as an expression of an undoubtedly fundamental but — bizarrely —insufficiently noted reorganization of society—a ‘quiet’ revolution initiated by software developers and implemented by way of algorithms; a revolution that, on the one hand, is subject to the drives of technological potential while, on the other, is reacting to the end of social utopias within a model of society dominated by consumerism. The book pinpoints and expands on the changes that data love brings to the human situation and explores the entanglements of all those who—be it out of stinginess, convenience, ignorance, narcissism or passion—contribute to the amassing of evermore data about their lives, eventually leading to the statistical evaluation and individual profiling of their very selves.

What differs this book from others on the same subject?

The book is written as a philosophical essay that both provides examples to illustrate the social implications of technological development and offers references to concepts, events and cultural artifacts of past centuries in order to help in the understanding of our present time.

Can you quickly summarize each of the book’s four parts?

Part I reconstructs the discussions after Snowden’s revelation with a focus on the situation in Germany and investigates the reasons behind the indifference towards the big data issue displayed by both governments and the general population. Big data is seen in the context of self-tracking and self-optimization as well as the promise of more convenience, thanks to ‘smart things.’ The section addresses the problem of surveillance as not primarily political or economical but as technological, philosophical, and anthropological. It correlates the environmental and the data catastrophe, and the socio-ethical dimension of the individual’s dealings in personal data.

Part II investigates the business of data mining with respect to specific products and methods and considers the mindset of Silicon Valley entrepreneurism. The digitization and datafication of everything is discussed as a silent revolution, which will increasingly hand agency over to algorithms. The chapter also addresses the suppression of the theoretical by the factual as a counterpart to the non-discussion of the ‘If-Then’ model of algorithmic analysis and regulation.

Part III illustrates the obsession with numbers in digital media and social networks and relates it to the pleasures of measurement during the enlightenment. The chapter discusses the appeal of statistics (numerical comparability, radicalized democracy, increased control, epistemological paradise) and the development of society as a “numeratocracy.” Addressing the risk that the provision of personal data will eventually become a social duty in the interest of the public good, the chapter finally considers the effect of the computational turn in knowledge production.

Part IV explores various options for resistance to the regime of data mining, from data fraud and data obfuscation to media dieting and alternative technologies such as Snapchat. It discusses the proposition that there might be an expert group (“algorithmists“) operating as a blend of management consultancy and consumer protection agency overseeing the integrity and accuracy of big data analysis and it emphasizes the requirement for a social discussion on how to deal with personal secrets once they can no longer be kept secret. Finally, the general complaint of critics and activists that the internet has developed in the wrong way (and the proposal that it should be brought back on track) is discussed with reference to Adorno’s critique of the cultural industry and his conviction that “There is no right life in the wrong one.”