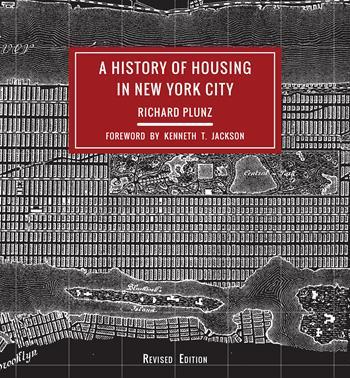 “Beyond doubt the large question facing New York housing production today has to do with a market that can not provide for the half of our households that are low income…. One can hope that growing public pressure bottom-up can merge with a top-down realization that we need to innovate in order to grow and prosper as a competitive and cosmopolitan global urban entity.”—Richard Plunz

Tonight, Richard Plunz will be at The Museum of the City of New York to discuss the revised edition of his classic book, A History of Housing in New York City. Below is an interview he recently had with the State of the Planet, part of the Earth Institute:

Question: What prompted you to revise the history?

Richard Plunz: The book has had a long shelf-life and is still very much in use, such that it seems important to update it to include the period of the past two decades. As well, the changes that the past 25 years have brought seem especially important to keep in the public eye, as housing becomes a growing concern in New York. Indeed, housing production plays an essential role in forming our culture and economy, and at present is too little recognized as such. For example, housing should be considered “resilient infrastructure,” but is rarely considered as such. And “climate resilience” obviously must engage where and how people live, let’s say the “soft” side of the equation, in addition to heavy infrastructure. Amazingly, infrastructural discussion in the present presidential campaign is limited to roads and bridges and shorelines, rather than to city fabrics, even as every city faces “affordability” issues of one form or another.

Q: Looking over the past 25 years, what do you see as the most significant changes or trends in housing in the city?

RP: There are many changes, and many are substantial improvements in the quality of life in the city relative to the rather dark days of the 1980s, which is when the earlier edition ends its narrative. As Ken Jackson describes so well in his preface, the Bronx is no longer burning, the pathologies of crack cocaine are no longer with us, and all of the advantages of our density are apparent as we move into an age when urban resilience is synonymous with well-being both local and global. Yet there is a dark side to this transformation. Neighborhoods have gentrified to the great detriment of long-term residents who are displaced; the positive economics have not abated the homeless dilemma; the robust housing market is limited to the high end, [and] that leaves half of the city with little recourse. And if the growing lack of equity in terms of access to adequate housing will not abate, how will we be able to resolve our long-term economic and social viability.

Q: You say in your preface to the revised edition of A History of Housing in New York City that New York has had the most severe housing problems, and also been a center for innovation and reform. In updating the story, where now do you see the worst problems, and where do you find innovation, and perhaps reform?

RP: Beyond doubt the large question facing New York housing production today has to do with a market that can not provide for the half of our households that are low income. And while both Mayors DeBlasio and Bloomberg tried various measures to stimulate this production, it remains unacceptably flat. The last mayoral campaign was won based on this question of fundamental inequities. But our tools for stimulation are too limited, and therefore innovation must somehow break out of normative models. One can hope that growing public pressure bottom-up can merge with a top-down realization that we need to innovate in order to grow and prosper as a competitive and cosmopolitan global urban entity.

Q: You describe New York’s wealth and poverty gap as a tale of two cities. It seems this has only intensified. You also raise the question at one point as to whether, as in the last “Gilded Age,” this inequality of wealth will spark a new wave of innovation and reform. Do you see any evidence that this will happen?

RP: Historically, in New York when housing conditions have gotten bad enough there has been possible corrective action. When health and public safety conditions became untenable, the housing production and market could be somehow adjusted, usually not ideally, but nevertheless, a positive response could be found in the robust reform legislation between 1879 and 1929. This was certainly true in the first “Gilded Age.” While the past decades have witnessed notable experiments with innovation and reform, today’s market is not responding in the same way as more than a century ago. Fundamentally, as New York City globalized, there has not been the same degree of local accountability in terms of its economic development and specifically in terms of housing production.

Q: You talk in a later chapter about the rampant loft conversions in the ‘60s and onward, much of which was done essentially illegally, without regard for formal building codes. You write that there has been a pattern in which “legality was sidestepped to achieve development.” Is that happening in any sense now, and how so?

RP: In New York historically, there have been the laws and then the question of their enforcement. And today remains no exception. And of course today there is the elaborate “officially” managed culture of negotiation of exception, such as air rights trading and the like. And recently there is the trend to downsize space standards, reflecting the overpriced market and the need to retain certain expertise within the labor force, like the younger generation involved with various aspects of information processing. While some of this activity is illicit, some has been “official.” It would appear that the changing economic and cultural landscape of the city will more and more challenge the housing reforms of the previous two centuries, and this is turf that will be heavily contested.

Q: You say that design innovation is lacking in the city. How does this compare to what you see going on in other fast-growing cities of the world? How are other cities tackling the issues of inequality, affordability and innovative design?

RP: Overall New York City housing design conventions are rather stale and codified, although there is some variation depending on market niche. On the luxury side, innovation tends to come from representation and appearance, and is heavily invested in marketing neighborhood location and amenities. On the reverse side, the innovation must come from financing before all else, with the housing itself rather minimal, although limited experimentation has reflected changing family structure while ranging to new construction techniques. But for New York all of this is very limited. Elsewhere in the world, in the context of more abundant money, the story is more sympathetic. Where there is a strong social net and sufficient wealth to sustain it, there is ample innovation in housing design; much of this is concentrated in Europe.

Q: What about the role of architects in all this? As you note in the book, the profession more or less “came of age” over the course of the city’s history; what’s happening to it now?

RP: In New York there remains two professions, consistent with the pattern of the last century. For the vast majority of housing production, the principal practitioners are the “bread and butter” architects. In the past century, especially during the ’20s, their production was prodigious and very important in defining the emergence of New York as a global metropolis. The opportunities for these practitioners are far more constrained today. They are not famous, but their contribution to the city is essential, and their efforts must reconcile very difficult constraints.

By contrast, in small numbers but highly visible are the so-called “starchitects” who do the luxury production and who are very important in high-end marketing strategies. Within this overall context, design innovation is extremely difficult. I should make clear, however, that there is interesting work related to housing design at the “affordable” level, and the book documents important examples of those efforts: projects like the Via Verde in the Bronx or Randolph Houses in Harlem. But they are few and far between, and as their developers have been the first to admit, given the paucity of financial options for below-market-rate housing, they are not likely to be repeated in the near future.