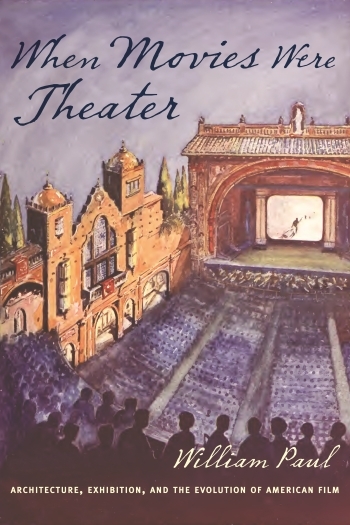 “How to arrange a movie theater might seem a fairly simple matter: a projector at one end, a screen at the other, seats in between. But it turned out not to be so simple after all.”—William Paul

The following is an interview with William Paul, author of When Movies Were Theater: Architecture, Exhibition, and the Evolution of American Film:

Question: Nowadays, we are used to watching movies anywhere and everywhere. Why should the space in which we view a movie make any difference?

William Paul: Beginning with the rise of television in the 1950s, the moving image became progressively divorced from architecture, but before that movies were for the most part associated with a specific architectural form. Given that early movies ran for less than a minute, showing a collection of them in a row could fit very nicely into the modular programming of the vaudeville theater. And so, in the United States, movies initially became associated with vaudeville, with each of the short films in the collection chosen for the sake of variety. Consequently, variety became a strong concern in American film exhibition. With the decline of live performance in the sound period, variety nevertheless continued to be an important concern in movie exhibition: programs of short films and double bills, two features for the price of one, made up in variety what was lost in live performance. And variety might well have been a governing aesthetic in American film production, leading to odd things like song numbers in gangster films or in film noir.

Q: So, theater programming at the time had an impact on film exhibition, but in what ways did the space of the theater impact on movies?

WP: How to arrange a movie theater might seem a fairly simple matter: a projector at one end, a screen at the other, seats in between. But it turned out not to be so simple after all. Vaudeville theaters in the 1890s, for example, were built on the dominant horseshoe form, which put a large proportion of the audience at extreme angles to the movie screen. The early design for purpose-built movie theaters recognized the problem of side-view distortion by an understanding that long and narrow was the best configuration for viewing a flat image.

The increasing dominance of the feature film throughout the teens coincides with the building of the great movie palaces. Architecturally these invoked live-performance theaters, but on a scale that went far beyond anything used for drama. While the theaters built in Times Square in the first couple of decades of the twentieth century ranged from about 600 to 2,000 seats, the palaces ranged from 2,500 to 6,000 seats. These enormous sizes were based on the belief, actually mistaken, that the optics of the motion picture image presented the same view to every audience member and democratized theater in the process. While early film theory sought to distinguish movies from theater, the architecture of these spaces announced that movies were an extension of theater, drama for the masses. These theaters stressed the continuity between movies and live drama in one other regard: the screen was located upstage, anywhere from twelve to twenty feet back from the curtain line, and placed within a theatrical set rather than the now familiar black cloth surround. The set was often a variation on a window in a garden, with the window being replaced by a screen when the show began, but it also might be a set specifically related to the content of the feature film. So, for example, performances of Quo Vadis (1913) had the image surrounded by a set that invoked ancient Rome. Although the image would be the brightest area on the stage, the set would be visible throughout the show and necessarily had an impact on how movies were shot.

Q: Does this mean that the theaters impacted on film style?

WP: There is ample evidence, from contemporary observers as well as the films themselves, that these palaces did have an impact on the development of American film style. Even as the architectural spaces kept getting bigger and bigger, the screen itself remained fairly small in order to keep the image sharp and brightly illuminated. In the early store theaters and nickelodeons that preceded the rise of the feature film, the screens generally ran from twelve to fourteen feet wide. In the palaces the screens grew somewhat larger, ranging from twenty to twenty-four feet wide, but they would be located on stages with proscenium openings from about forty all the way up to one hundred feet. Aside from emphasizing the theatricality of movies, one of the functions of the “picture settings,” the theatrical sets that surrounded the film image, was to make the image seem less small by expanding the visual field. Locating this small image on a very large stage had a number of consequences, but let me isolate the most obvious one here: as the architectural spaces got progressively larger, the camera throughout the teens got progressively closer in. The resulting style which became dominant in the twenties privileged close-ups as a way of making story points or revealing character. Clearly this style was in part a consequence of the grand spaces in which these movies were shown.

Q: Did the theaters have any influences on the kinds of movies that were made?

WP: Although collective memory of the past has focused on the great palaces, there were in fact different kinds of theaters that called for different kinds of movies. Nowadays it’s easy enough to see a correlation between kinds of movies and kinds of theaters to the extent that art cinemas are generally smaller and more intimate than the multiplexes designed to show mass-market product. Art movies, whether foreign films or independent American, define themselves as distinctly not Hollywood, even when released by specialty divisions of the Hollywood studios. There is a tendency, on the other hand, to think of Old Hollywood as more homogeneous, with all its movies opening in the palaces, playing in these locations generally one or two weeks and then moving into smaller neighborhood theaters. But consider this: in 1925, at the height of building all the great palaces, Loew’s, the parent company of MGM, opened a new theater on Broadway with a capacity of a bit under 600. This was intended as an “extended run theater,” which represented a separate exhibition system that grew up around the early feature film, often taking over existing legitimate theaters, which were much smaller than movie theaters, and featuring films that could run for months or even years with reserved seats and prices comparable to live theater, theaters for the elite as opposed to the democratic palaces.

The movie industry generally referred to the films that played at extended-run theaters as “specials,” with specialness defined by the presence major stars, production values, budget, running time, or, significantly, artistic distinction, something that made the film look and feel different from most Hollywood fare. So, in the past, the theatrical plant allowed for and even encouraged Hollywood films that went against Hollywood conventions. This system was at its most elaborate during the silent period, with thirteen Broadway theaters at one point in 1929 given over to extended run reserved seat showings. The system was curtailed in the sound period, partly because of the Depression, but it did continue to have an impact on production. So, for example, All Quiet on the Western Front in 1930 was initially booked into Shubert theaters across the country, while Citizen Kane in 1941 opened in reserved seat engagements. These smaller theaters were crucial for continued production of films that sought to depart from the Hollywood norm.