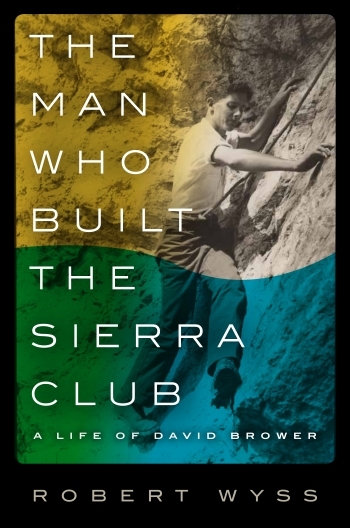 “What mattered [to David Brower] was the long term, not for what his contemporaries thought of him. ‘Environmentalists make terrible neighbors,’ he often said, ‘but great ancestors.’ And Brower was both.”—Robert Wyss, author of The Man Who Built the Sierra Club

The following post is by Robert Wyss, author of The Man Who Built the Sierra Club: A Life of David Brower:

John McPhee writing in the New Yorker in 1971 called him the Archdruid, a moniker he expanded upon when he wrote Encounters With An Archdruid.

Two documentary films were produced about Brower during his lifetime and the titles say a great deal about the duality of the man they were profiling. One was For Earth’s Sake and Brower liked it so much he borrowed it for one of the several memoir-type books he produced. The other was even more grandiose — Monumental.

Those productions along with a vast trove of newspaper and magazine stories including obituaries after Brower’s death in November, 2000 were what I had to go on when I began working on my biography, The Man Who Built the Sierra Club: A Life of David Brower.

It turned out that Brower was a far more complicated character than I ever imagined. In some respect, a researcher’s delight because of all of the trails he took me down. But in others, a writer’s challenge.

Here’s what I wrote in the book’s introduction:

Over the years, David Brower has been called many things—tireless, unyielding, passionate, visionary, bold, influential, uncompromising, handsome, charismatic, opinionated, and articulate. He became a circuit-riding prophet, the environmental movement’s conscience who defined conservation and environmentalism from the mid-1950s until his death in 2000. He was an angry trailblazer responsible more than any other for turning environmentalism from hiking and bird-watching into a social and political force.

Those same admirers also called Brower stubborn, contentious, controversial, irascible, impossible, polarizing, impolitic, impolite, and a notorious curmudgeon. He on occasion would willingly stretch facts into falsehoods, was so unwilling to tamp down his views that he destroyed lifelong friendships, and refused to take orders even from those in institutional positions above him. He was frustratingly independent.

And yet he did all of this for one selfless reason—to sustain the earth’s natural environment. He wanted to save as much of the planet as possible from humans. He wanted to preserve what remained of the natural world and safely pass it to future generations.

Two related stories illustrate the opposing sides of Brower, the idealist conservationist who awakened a new movement and the messianic hubris that prompted him to engage in willful insubordination.

In 1966 Brower was engaged in his greatest conservation battle of his days as executive director of the Sierra Club, and he was losing. The federal government wanted to build two dams in the Grand Canyon, and as outlandish as this plan was, few seemed alarmed.

Brower placed full-page advertisements in some of the nation’s largest newspapers. The most famous declared: “Should We Also Flood the Sistine Chapel So Tourists Can Get Nearer the Ceiling?”

The next day the U.S. Internal Revenue Service told the Sierra Club it was under investigation because the club was violating its’ tax exempt status by engaging in political activity. This was a blow—the Sierra Club depended on such donations for its financial survival.

Brower announced that the federal government was trying to censor the Sierra Club and the story literally exploded in the news. Why was the club losing its tax status? Because we’re trying to save the Grand Canyon, Brower said. Newspapers were irate, so was the public.

It was the tipping point. Dam builders were quickly on the defensive and they never recovered. Within months the dam project was dead.

But the legal fight with the IRS continued and here we see the other side of Brower. The club had hired a very prominent tax lawyer who devised a pointed but limited appeal with the IRS to prevent a more costly and lengthy legal battle. Brower, who never worried about expenses, wanted an all-out war.

In the Spring of 1968 the lawyer, Gary Torre, was invited to Washington to argue his case before the IRS. Brower repeatedly asked to attend and argue his case and he repeatedly was told no by the club’s board of directors, his boss. Torre presented his case and was at lunch when he was summoned back to the IRS because the agency had received a telegram from Brower.

Brower tried in the telegram to over-ride Torre’s arguments, proposing the case be expanded and that a conference should be held with lawmakers and conservationists to discuss not only tax but first amendment issues. Plus, the telegram had gone to dozens of top officials.

Torre was outraged; he believed he had been publicly humiliated. He demanded and succeeded in getting the Sierra Club to repudiate Brower’s telegram. The IRS eventually denied the Sierra Club’s appeal, and the club was hobbled financially for years.. Some have suggested Brower and his telegram helped kill the case.

This was the other side of Brower, the risk-taker who sometimes went too far. Always the iconoclast Brower did not care. What mattered was the long term, not for what his contemporaries thought of him. “Environmentalists make terrible neighbors,” he often said, “but great ancestors.”

And Brower was both.