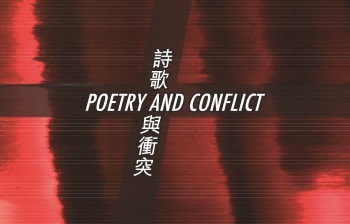 What Can Poetry Do?

Our celebration of world literature would not be complete without a post to celebrate world poetry, especially during National Poetry Month.

The International Poetry Nights in Hong Kong is a biennial gala celebrating poetry that brings together poets from all over the world and unites them under a single theme. Each festival yields a box set of chapbooks written in connection with the festival’s theme and an anthology, which collects selections of the participating poets work, both are published by The Chinese University Press. The theme for the 2015 festival was: Poetry and Conflict.

In his foreword to the Poetry and Conflict anthology co-editor Bei Dao writes:

In the work contained in this collection the poets answer. Over and over again they show us what poetry can do. Here are a few highlights:

From Najwan Darwish, a Palestinian poet, who is one of the foremost Arabic language poets of his generation:

I considered looking at my lower half
where I could feel the pain
but held back for the moment, fearing
not to find some part of me
I kept on down the stairs, my missing part
still with me, and here I am
climbing into bed with my wanting body
(still not looking), and it no longer matters
where the damage is, and it will do no good
to remember how I was wounded

Even in war, I was just a passer-by

From Noriko Mizuta, a Japanese poet, who is also known for her work translating Sylvia Plath and Anne Sexton into Japanese.

Where memory goes fading on
Blue sky
Tumbling to the field, I follow
Where the blue ends, could long-ago be there?
Where blue goes blank
A white nothing
Better yet, a not-darkness
Sky envelops everything around
A meadow’s worth of oblivion
Nowhere so much as a trace

(Translated by Jordan A. Yamaji Smith)

From Les Murray, an Australian poet, who has received many accolades, including the T. S. Eliot Prize.

From his poem The Tin Wash Dish

Lank poverty, dank poverty,
its pants wear through at fork and knee.
It warms its hands over burning shames,
refers to its fate as Them and He
and delights in things by their hard names:
rag and toejam, feed and paw—
don’t guts that down, there ain’t no more!

From Anne Waldman, an American poet whom Publishers Weekly has deemed “a counter-cultural giant.”

From her poem Hungry Ghost

Although worn too, transient flickering

Transmigrating through many lifetimes, hungry ghost

Down & dirty on the street, shackled

Body picked over, on a street in a distant street “over there”

Other side of the hungry ghost world

People willing to die there, fighting the hungry ghost