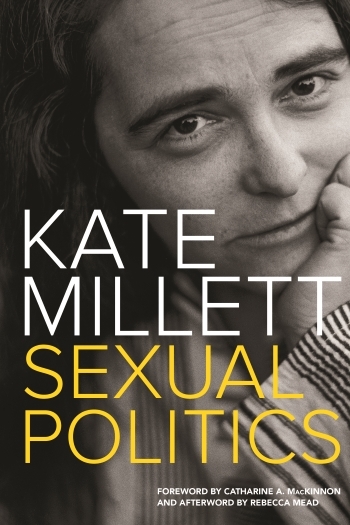 “What Millett’s work showed were the ways that political action and cultural expression interpenetrate. Both sites of struggle were necessary to bringing about the “altered consciousness” that, for Millett, would mark a sexual revolution and bring ‘a world we can bear out of the desert we inhabit.’ We’re not out of this desert yet; in some ways we are more lost than ever. But culture, Millett taught us, may help us find our way to a better land.”—Maggie Doherty, from her article “What Kate Did,” published in The New Republic

In reviewing the new edition of Sexual Politics, by Kate Millett, Maggie Doherty comments in The New Republic on the intense and immediate reaction to the book by both the mainstream press and her fellow radical feminists when it was first published in 1970:

The reactions of both camps went beyond anything Millett could have anticipated. Suddenly, she was wanted on every college campus. She was invited onto daytime talk shows. (Her Minnesotan mother warned her against appearing onscreen with unwashed hair.) Her book appeared in editorial cartoons. Her phone rang constantly. Her portrait, by the painter Alice Neel, graced the cover of Time; the magazine crowned her “the Mao Tse-tung of Women’s Liberation.”

As Maggie Doherty explains, Sexual Politics, which was Millett’s revised dissertation for a literature PhD., reflected her belief that “reading could produce a better way to live.” Millett’s analysis of the ways in which four writers—D. H. Lawrence, Henry Miller, Norman Mailer, and Jean Genet— shaped, or in Genet’s case, challenged, patriarchy offered a powerful critique of the existing political, cultural, and social views and treatment of women. Millett’s revolutionary work, presented with scholarly rigor, articulated ideas within the radical feminist movement regarding the sexual revolution, homosexuality, and monogamy and brought them to a mainstream readership.

Millett was somewhat unprepared for the intense reaction her book received and never saw herself as a public figure in the way that Gloria Steinem or Betty Friedan did. Her book came under criticism from those who faulted it for not sufficiently addressing issues of class or race but as Doherty argues, the book’s ideas continue to resonate. Doherty concludes by speculating on the singularity of Millett’s achievement and its continuing legacy:

It’s hard to imagine any work of literary scholarship—let alone a Ph.D. dissertation—landing its author on the cover of Time today. While the contemporary academy has its share of public intellectuals, most of its scholars write for audiences of specialists (after all, they are employed to do just that). Millett, by contrast, was writing in the waning years of what Louis Menand has called the age of “heroic criticism,” a time when the stakes of literary debate seemed high. The books you preferred said something about your politics, even your morals. If you wanted to change the way people lived and loved, you might very well set out to change the way they read.

This faith in literature—in particular, this faith in the academic study of literature—is perhaps the thing that most marks Millett’s work as the product of another time. It’s striking that in the years after her first book’s release, when she was spending much of her time advocating for “gay liberation,” it occurred to her that the best thing she could do was not speak, or organize, or teach, but write a book of literary criticism, a “SexPol of gay and straight, a scholarly objective approach more convincing to the authorities.” She mapped it out one night at her farm-cum-feminist artist colony in Poughkeepsie: “First lay down a theory about the two cultures, our segregated society. Then find in homosexual literature the emotional truth of the experience as it was lived.” The book never came to be, but the dream of it tells us something about what it meant to be a literary scholar, and a radical feminist, in the early 1970s.

“Will future historians say that I blew it?” Millett asked in Flying. The answer has to be no. Sexual Politics may have its intellectual and political flaws, like any text that documents a way of thinking proper to the past. But what Millett’s work showed were the ways that political action and cultural expression interpenetrate. Both sites of struggle were necessary to bringing about the “altered consciousness” that, for Millett, would mark a sexual revolution and bring “a world we can bear out of the desert we inhabit.” We’re not out of this desert yet; in some ways we are more lost than ever. But culture, Millett taught us, may help us find our way to a better land.