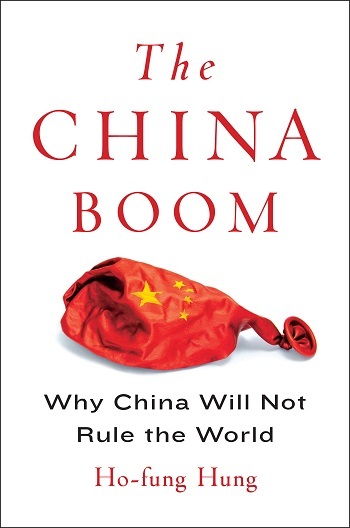 “Creating the A.I.I.B. is not Beijing’s attempt at world domination; it is a self-imposed constraint, and a retreat from more than a decade of aggressive bilateral initiatives.” — Ho-fung Hung

This week, our featured book is The China Boom: Why China Will Not Rule the World, by Ho-fung Hung. Today, we are happy to present a crosspost of “China Steps Back,” an article by Ho-fung Hung published in the New York Times, in which he discusses the Asian Infrastructure Investment Bank and China-America relations.

China Steps Back
By Ho-fung Hung

Beijing’s plans for a new multilateral Asian Infrastructure Investment Bank have put Washington on edge. More than 40 countries, including major United States allies in Europe, have signed up to join it despite the Obama administration’s objections and warnings.

In fact, the United States government has nothing to fear from the A.I.I.B.; its opposition is misguided. The bank’s creation will not enhance China’s global power at the expense of the United States. If anything, Beijing’s attempt to go multilateral is a step backward: It’s a concession that China’s established practice of promoting bilateral initiatives in the developing world has backfired.

Once more, anxiety about China supplanting the United States as the world’s leading power is undermining cool-headed analysis. When China set up its own sovereign wealth fund in 2007, many feared it would take control of strategic resources, acquire sensitive technology and disrupt global financial markets. But the China Investment Corporation, which controlled $575 billion in 2014, has been struggling with losses, partly because of mismanagement, according to China’s National Audit Office.

In 2008, just as the United States financial system was crashing, China surpassed Japan as the biggest holder of U.S. Treasury securities, setting off predictions that Beijing might one day dump them to force the United States into economic and political submission. Instead, China’s holdings of U.S. Treasuries have more than doubled, from about $493 billion in early 2008 to more than $1.2 trillion at the beginning of this year.

Again and again, the alarmists have been disproved. One reason is that they have often overlooked the real impetus for China’s outward investment. Beijing set up a sovereign wealth fund and bought up U.S. Treasuries because it needed to find a safe and profitable way to invest its vast foreign exchange reserve, which kept expanding thanks to the country’s growing exports. China’s move today to set up the A.I.I.B. is yet another rational response to the economic challenges it faces at the moment.

For more than a decade, Beijing used part of its massive reserves to support the activities of Chinese companies, mostly state-owned enterprises, around the world, in infrastructure development, mining and other industries. To facilitate that, it pledged to give out enormous amounts of bilateral loans and grants to developing countries — a total of $671 billion in 2001-11, according to a 2013 RAND Corporation report.

The Chinese government awarded much of this financial assistance with little interest in influencing local politics, but often on the condition that the projects it backed use Chinese contractors and Chinese-made products. Such terms were designed to serve the interests of Chinese companies. And they did, perhaps only too well.

Although China’s assistance to Africa, for example, brought new economic opportunities for the continent, it also created new inequalities and, in turn, a political backlash. During the 2011 election in Zambia, where China invests heavily in copper mines, voters elected the candidate who ran on an anti-China platform. In 2013, Lamido Sanusi, then the governor of the Central Bank of Nigeria, warned that China’s approach to Africa was “a new form of imperialism.”

This wariness exists in Asia, too, including among longtime allies of Beijing, like Myanmar. Over the past few years, the Myanmar government has moved closer toward Washington partly to overcome its dependence on Chinese assistance. It has also suspended a massive Chinese dam project that had sparked local unrest. Such pushback against China’s bilateral initiatives is the reason Beijing now wants to create multilateral vehicles for its investments.

The A.I.I.B.’s capitalization may reach $100 billion, with China providing up to $50 billion. Last year, China also pledged $40 billion to the new Shanghai-based BRICs bank. That, too, was seen as a challenge to America’s leadership in international financial institutions. But such concerns overstate just how much power any given government can reap from dominating a multilateral organization.

The United States became the twentieth-century’s superpower thanks to its bilateral economic assistance, rather than its clout in multilateral bodies. The World Bank was created in 1944 but was soon overshadowed and sidelined by the Marshall Plan and other United States bilateral assistance programs. It was revitalized only in the 1970s, when America’s global power had weakened.

Multilateral institutions are inherently restricting. When a country lends on its own it has total control over the terms of the arrangement. Lending via the A.I.I.B., or the BRICs bank, will mean being constrained by other stakeholders. And this is precisely Beijing’s point. As Shi Yaobin, a Chinese deputy finance minister, said recently, “every member’s share” of decision making power in the new A.I.I.B. “will decline commensurately with the gradual increase in the number of the member countries.”

China, in other words, is deliberately forgoing some of its leverage, including in the very organization it is setting up. And it is doing so because it wants the cover and the legitimacy that will come from the participation of other countries. Creating the A.I.I.B. is not Beijing’s attempt at world domination; it is a self-imposed constraint, and a retreat from more than a decade of aggressive bilateral initiatives. And the more China channels its international investments through multilateral institutions, even ones of its own making, the lesser the risk that it will become all-dominant.