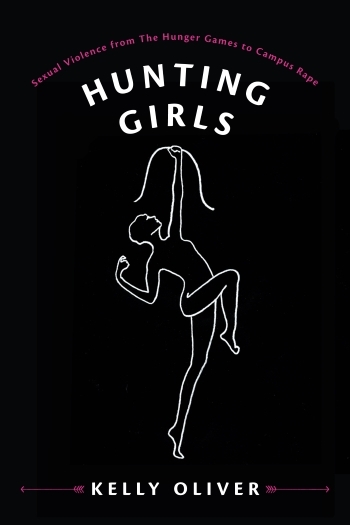 “Given the continued use of social media to target, harass, and humiliate young women, it is telling that these technologies were born out of sexist attitudes. In their inception, some of the most popular social media sites were designed to denigrate women.” — Kelly Oliver

This week, our featured book is Hunting Girls: Sexual Violence from The Hunger Games to Campus Rape, by Kelly Oliver. Today, we are happy to provide an excerpt from “Social Media and the Lack of Consent,” an article by Kelly Oliver that originally appeared in The Philosophical Salon. In this article, Oliver traces the “continued use of social media to target, harass, and humiliate young women” back to the sexist origins of many forms of social media.

Don’t forget to enter our book giveaway for a chance to win a free copy of Hunting Girls!

Social Media and the Lack of Consent
By Kelly Oliver

Social media such as Facebook, Snapchat, and Tinder were invented as part of a culture that objectifies and denigrates girls and women. It is well known that the Facebook founder and Harvard graduate, now one of the richest men in the country, invented the social media site Facebook to post pictures of girls for his college buddies to rate and berate. Reportedly, Evan Spiegel, Stanford graduate and inventor of Snapchat, sent messages during his days in a fraternity referring to women as “bitches,” “sororisluts” to be “peed on,” and discussed getting girls drunk to have sex with them. And the founders of the wildly popular hook-up site Tinder, were both involved in a sexual harassment suit involving their former Vice President of marketing, who claims she received harassing sexist messages calling her a “slut,” a “gold-digger,” and a “whore.”

Given the continued use of social media to target, harass, and humiliate young women, it is telling that these technologies were born out of sexist attitudes. In their inception, some of the most popular social media sites were designed to denigrate women. Of course lots of social media sites, like other forms of traditional media, bank on pictures of attractive girls and women looking sexy or cute, along with pornographic images. Creepshot sites in particular are a telling example of a new phenomenon, namely, the valorization and popularization of lack of consent.

“Creepshots,” are photographs of women’s bodies taken without their consent. Lack of consent is essential, as is outlined on websites that specialize in creepshots such as tumblr’s creepshooter, creepshots.com, and metareddit’s creepshots, which insists photos must not be posed and should not be taken with the subject’s knowledge. Clearly, girls and women are seen as unsuspecting “targets,” prey to be “shot” and “captured” on film. Some creepshot videos end up on pornographic sites.

Creepshots are explicitly valued because of the lack of consent on the part of the subjects. Indeed, insofar as they are unaware they are being photographed, subjects of creepshots cannot give consent… unless women moving through the world in their everyday activities wearing their everyday clothes (see yoga pants as a subcategory of creepshots) constitute consent, as if women were public property.

The same valorization of lack of consent can be seen on college campuses, especially in fraternity culture where chants and signs endorsing sexual assault with unconscious women, and fraternity Facebook sites filled with pictures of unsuspecting naked or partially clothed women, have become commonplace. For example, in 2010 at Yale, fraternity brothers marched around the freshman dorms chanting, “No means yes, yes means anal.” In 2013, a fraternity at St. Mary’s University in Halifax welcome new students: “SMU boys, we like them young. Y is for your sister, O is for oh so tight, U is for underage, N is for no consent, G is for grab that ass,” and a fraternity suspended from Texas Tech for flying a banner that read “No Means Yes.” That same year, another frat was suspended at Georgia Tech for distributing an email with the subject line “Luring your rapebait,” which ended, “I want to see everyone succeed at the next couple parties.” And, in 2014 at William and Mary, fraternity members sent around an email message, “never mind the extremities that surround it, the 99% of horrendously illogical bullshit that makes up the modern woman, consider only the 1%, the snatch.” Last year a fraternity at Virginia’s Old Dominion was sanctioned for posting sexist signs, including “Drop off your freshman daughter here.” The list goes on and on.

These examples suggest an aggressive campaign on the part of some fraternities to insist “No” means “Yes,” and consent is not only irrelevant, but also undesired. In the St. Mary’s chant, lack of consent is openly valued, “N is for no consent.” Actively seeking sex without consent, sometimes even admitting it is rape, is what they claim they want. Whatever their actual desires, these college men are saying that they want nonconsensual sex.

Fraternities around the country have been sanctioned for posting creepshot photographs of unconscious naked or semi-clothed women, some in embarrassing sexual positions. The women involved did not know or consent, and some of these photographs may be evidence of sexual assault or nonconsensual sex, as well as illegal in their own right. Obviously, these fraternity boys think that pictures of naked women and their body parts, circulated to hundreds on Facebook, is fun and funny.

In the highly visible cases of Steubenville and Vanderbilt, along with the rapes, taking creepshot photographs of unconscious naked girls or women and distributing these were an important part of the sexual assaults. The boys and men smiled and clowned for the camera, joked and jeered for posterity, and took pleasure not only in sexually abusing their victims, but also in capturing it on film, and then sharing it with friends. Reportedly, in the Vanderbilt case, Corey Batey told Brandon Vandenburg to “get this on camera,” as he assaulted their unconscious victim. Serial rapists and sexual predators who seek out vulnerable girls, drug them, or prey on intoxicated girls, and then view their rapes as conquests, are increasingly photographing them as a new form of trophy.

While boys and men bragging about their sexual exploits is not new, posting “creepshot” pictures on social media is. While rape and debasement of women are not new, the use of social media to do so is. The use of ubiquitous cellphone cameras to take creepshots of unsuspecting women makes it clear that contemporary mainstream youth culture values lack of consent. In other words, it is not just that some men will take pictures, or have sex, without a woman’s consent, but also that photographs and “sex” are valued more where there is no consent. Of course, this makes an unconscious woman the perfect subject for creepshots and sexual assault.

Candid camera, and humor in humiliating photos, has been around since photography itself, and so has the penetration of pornographic images into mainstream culture. If men and boys used to secretly share pictures of naked women, now they do so publicly. And whereas in the past, pornographic images were produced for mass consumption but sold privately, even wrapped in brown paper, and only to adults, now the Internet is filled with selfie porn, sexting photos, and creepshots. Rapists hamming for the camera, and taking creepshots of unconscious girls, are part and parcel of the patriarchal pornutopia in the age of social media.