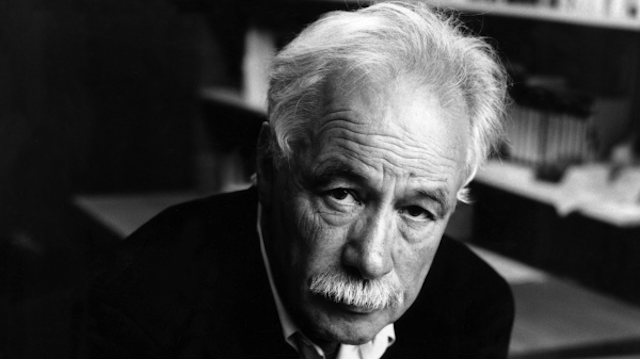 In the following excerpt from Sebald’s Vision, Carol Jacobs examines Sebald’s distinct style, his famous use of photographs, and his mixing of fact and fiction:

Yet even before he embarked on his literary path in the mid eight­ies, Sebald will insist, he was already on the path from science or scholarship to fiction. “Yes, it was about the middle of the 80’s. And one needs to mention first that already as a literary scholar actually I was working in an unorthodox manner and I always went to the limits of what was possible or acceptable in literary schol­arship. This rather essayistic procedure moved then, I believe, more or less naturally in the direction of the more fictive.” To be sure, he explains, while frequently calling into play the same image, his current work, it too, requires research; but this research is hardly academic. It never goes straight forward, its path can never be retraced, and it places him in the role of a dog.

When I do research for my books, I don’t do it according to academic methods. One follows rather a diffused instinct; the trajectory of the research can then no longer be replicated because it looks like the way a dog runs across a field to follow a scent. That is a rather primi­tive form of research, always with the nose or muzzle on the ground.

In this way one always finds very peculiar things which one would never have reckoned on, things which you can never find in a ratio­nal way, that is when you do research as you learned to do it at the university, always straight ahead, right, left, right angles, and so on. One has to search in a diffuse way. It should be a matter of discovering precisely in the manner that a dog seeks, back and forth, coming out and going back down, sometimes slowly, sometimes fast.

If Sebald’s manner of research isn’t precisely rational, if it is a bit all over the place, we, his readers, know at least what he collects: photos, documents, citations. Their function, however, Sebald readily admits, is ambiguous. Photographs, he says, are the “true documents,” they make it possible to hold onto things. “It’s necessary to hold onto these things somehow or other. Of course you can do that by writing, but the written is no true document. The photograph is the true document par excellence. People let themselves be convinced by a photograph.” And yet holding onto things and convincing the reader is not quite or not all that Sebald is after. For what interests him more than a document that seems incontrovert­ibly “true” is the suggestion of the faint, the dim, the indistinct. “I don’t want to mount pictures of high photographic quality into the texts, rather they are simply documents of found material, something secondary. It is actually very nice when this lack of clarity enters into the photos” Photographs are there­fore at once “the true document par excellence” that convinces the onlooker, and yet they are also there to unnerve the reader: they right­fully introduce irritation and insecurity. “Thus many of these docu­ments are in fact documents. . . . On the other hand there is the one or the other of the photographs, one or other of the documents that is put in with another end in view, where, really . . . that is the falsi. ca­tion theme, which is to say: it is also a matter of making the reader uncertain. The reader should indeed think about: what is true in these stories, no?”

The photographs have therefore a double function, as Sebald will go on to reiterate in another interview. They make the improbable seem authentic, but at the same time they introduce the possibility of the counterfeit. “And this is a very complicated, self-contradictory process which finally leads either consciously in the head of the reader or subliminally to a feeling of continuous irritation—which, I hope, somewhat corresponds to the feeling I myself have.”

For all that, what the photos inhabit and illuminate cannot simply be declared “fiction.” Sebald insistently refuses to call his works nov­els. Prose book, prose text, prose literature: just not novel. Speaking of Austerlitz, he says that it is “in my eyes not a novel. It is a prose book of an indeterminate kind.” Indeterminacy is indeed his trademark. When Volker Hage suggests to Sebald in 2000 that in the case of Kluge one never knows what is fiction, what citation, and what invented citation, Sebald replies: “I consider that very productive. I’m often asked whether the lives I tell of are authentic or not. That is precisely the secret of fiction, that one never knows exactly where the line of demarcation runs.”

That unlocatable line runs not only between fiction and cita­tion, but also between fiction and fact. What Sebald strives for is the smooth transition back and forth between the two such that the reader is never certain where she is. “When you drive a car with auto­matic transmission you only have this strange rolling feeling when it goes from one level to the next. And that is what I try to simulate there—that one comes, through a kind of lissé de main, from fact into fiction and back again, that one never knows precisely where one is ac­tually. I’ve always admired that in Alexander Kluge.” Reading Sebald, then, would be giving oneself over to a no-man’s-land where the borders between literary scholarship (describing a text), fact, document, citation, and fiction are ever shifting. One experiences the object read somewhat like Simplicius experiencing Baldanders (chapter 3). Or one might (also with Sebald) say the fictive, the documentary, and the cited come together over and over at seams or join together like the rows of teeth on opposing sides of a zipper. “There you’ve put your finger on one of the seams or borders, one of the seams in the text where the fictive more or less puts itself together with the documentary or that which is cited like a zipper”