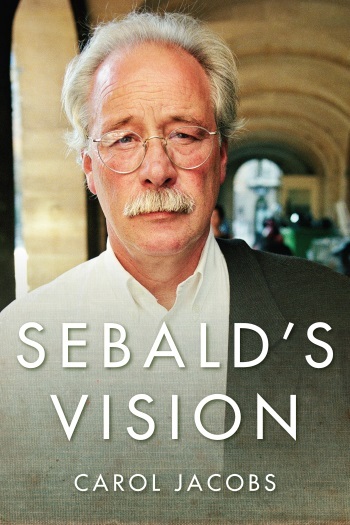 “In Sebald one encounters an ethics of melancholy outrage, but he also sets forth his moral position with an astonishing sense of self-certitude.”—Carol Jacobs

In the following excerpt from the preface to Sebald’s Vision, Carol Jacobs details some of the distinctive features of W. G. Sebald’s fiction:

Three aspects of Sebald’s writing must inevitably strike every reader. To begin with, it is a question of a postwar German author addressing the Holocaust (and other historico-political and ecologi­cal disasters) in a manner the reading public had never before wit­nessed. In Sebald one encounters an ethics of melancholy outrage, but he also sets forth his moral position with an astonishing sense of self-certitude.

Second: every reader is struck by the visual oddity of literary and essayistic works peppered with images: photographs, documents, diagrams, sketches, and reproductions of artworks. The temptation, of course, is to assume that, given the ethical stance, the visual materials are there as illustrations. In Sebald’s writings one soon notices that this assumption is particularly vexed, since he openly plays with the purposeful uncertainty of what he places be­fore our eyes. The visual materials, as Sebald admits in an interview, often serve the purpose of readerly disorientation. And then one en­counters in each of his writings an astonishingly innovative writing style. Given his performances of meandering detours, his shatter­ing of frames, crossing borders, writing tangentially, disintegrating the name, surreptitiously citing, and announcing blindness, what is called for is a careful analysis of the highly unusual literary practices of his texts. How to reconcile such a radical stylistics with moral cer­titude? This is the question. How to understand, as Sebald will assert in interviews, that he can only speak indirectly? The task in reading Sebald, then, is to account for a whole range of concepts: what Sebald called our moral capacity alongside the vagaries of perception and, more generally, how representation in art and literature relates to the epistemological crises that he shows us arising out of the juxtaposi­tion of all these.

That his writings are about vision as the ability to see can escape no reader. Alongside the unusual, interspersed visual materials that rightfully engage so many Sebald scholars a theme of sight is oft en woven into the text. In “Air War and Literature” Sebald reproves those writers who directly witnessed the Allied bombings. What was called for was a steady gaze at what was before them (“Air War”) rendered in a concrete prose that might make the reader see. Still in The Rings of Saturn the narrator will celebrate not only Rembrandt’s verisimilitude but also his rebellion against mimesis. That refusal to copy nature emerges as Rembrandt’s social commentary. Sebald also writes of the remark­able realism of the art of Jan Peter Tripp, while nevertheless insisting that it is less its identity with reality that is worth considering than the “far less apparent points of divergence and difference”. In a late interview, Sebald will go on to insist that the Holocaust, which so concerned him, can only be spoken of indirectly: “So the only way in which one can approach these things, in my view, is obliquely, tangentially, by reference rather than by di­rect confrontation.” These are atrocities, he often takes the opportu­nity to remind us, that he himself, in any case, born in 1944, could not possibly have experienced head-on.

The degree to which written texts are called upon to see and report a factual or historical world of the artist’s experience fluctuates wildly in Sebald’s works and, more crucially, also within each individual work. In the texts we are about to read, neat conclusions about vision-of-the-eye are impossible. And then we encounter the prolific acts of citation, both visual and verbal, that are bound to seem twenty-twenty from a certain point of view. As we all know, however—and no one better than Sebald—the play of montage alters the incorporated material and puts it into new relations that cause us to see and read otherwise.