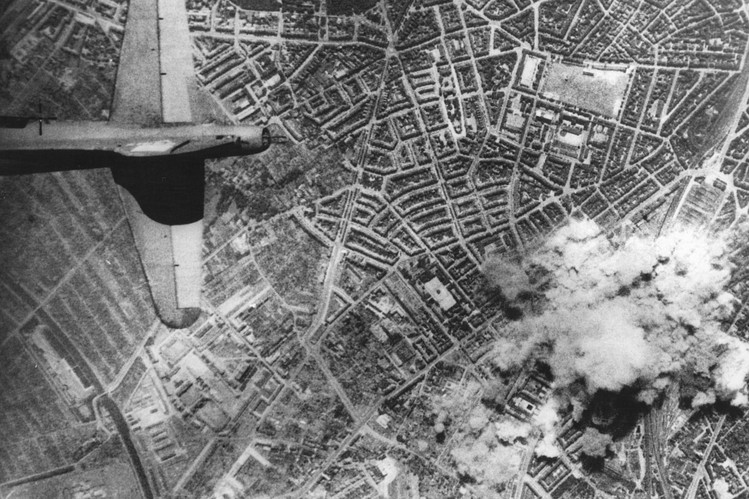 “Sebald demands a language that closely follows upon the events of destruction and brings them into our memory … Sebald calls for a language that makes one see.”—Carol Jacobs

In the following excerpt from Sebald’s Vision, Carol Jacobs discusses Sebald’s controversial “Air War and Literature,” and his call to remember German victims of the allied bombing:

Five years after the first publication of The Emigrants in 1992, Sebald gives a series of lectures entitled “Air War and Literature” (“Luftkrieg und Literatur”). The Emigrants closed with the judgment of Genewein, the would-be documentarian of the Lódz Ghetto who imagined, no doubt, he was fixing reality in place. “Air War and Lit­erature,” as it opens, demands an aesthetic (or anti-aesthetic) that turns that suspicion of the documentary on its head. It sets us up for a theory and practice of “concrete memory.” Representation is clearly called upon to serve reality. Still, the shift from the earlier prose fiction to the “Air War” lectures is no symmetrical displace­ment, no difference as extreme or easy to grasp as that between night and day. It is no move, say, from the frivolities of art to the gravity of history. Sebald’s ultimate refusal to be the vehicle of a déjà vu, the writer’s fundamental skepticism by the end of the lectures with regard to what has been seen, establishes a kinship between his commentary on German postwar literature and his earlier liter­ary publication. And yet this is hardly evident at the outset of those lectures.

In 1997 Sebald holds forth from the other side of the German bor­der, from that no-man’s-land of what is, from a certain geopolitical viewpoint, regarded as Swiss neutrality. With his two lectures deliv­ered in Zurich, Sebald drops something of a bomb. What he ostensi­bly speaks of is literature—literature of a particular historical place and time. “Air War and Literature” castigates the failure of a genera­tion of German writers “for their incapacity to record and bring into our memory that which they had seen.” He dreams of a language of immediacy that unproblemati­cally names the experience of the observer, which then, somewhat magically, might become that of the reader as well. Sebald writes of an aesthetic imperative arising out of a “moral imperative,” imposed, in turn, by the particular object to be portrayed: in this case the utter destruction of the German cities by the Allied bombing attacks in the late years of World War II. But here, already, lies something of the well-recognized scandal of his text. The au­thor of those genre-bending volumes about (and yet not always quite about) the Holocaust—The Emigrants and Austerlitz, to name those now most familiar to Sebald’s audi­ence, came to Switzerland in the name of another, the other victim. It is no longer the murdered and expatriated victims of European his­tory and the Third Reich in the thirties and forties, both Jews and non-Jews, but those who by choice or fate remained on German soil. What would they, could they, have to say for themselves, of them­selves? How does their speech or silence relate to their particular po­litical and (thus) moral position and to the more generalizable situa­tion of trauma?

This is a text of accusation and judgment, written from the per­spective of a writer who knows what’s what and knows what’s right. His essay seems a matter of verbal retribution against those who failed to live up to their ethico-literary responsibilities to give the facts and nothing but the facts. A year later, in an interview with James Wood, Sebald casts judgment on just this kind of writing. “I think that fiction writing, which does not acknowledge the uncer­tainty of the narrator himself, is a form of imposture and which I find very, very difficult to take. Any form of authorial writing, where the narrator sets himself up as stagehand and director and judge and executor in a text, I find somehow unacceptable.” And on De­cember 6, 2001, interviewed on KCRW, speaking of the horrors of the Nazi period and in the spirit of such works as The Emigrants and Aus­terlitz, Sebald says: “The only way in which one can approach these things . . . is obliquely, tangentially, by reference rather than by di­rect confrontation.” Is “Air War and Literature,” then, in its moral certainty “a form of imposture”? Would the texts Sebald calls for, retrospectively, also be “somehow unacceptable,” if one takes Sebald at his word?

Over and over Sebald insists that what he is looking for is “the pre­sentation (Darstellung) of the real circumstances.” It is difficult, almost impossible, he tells us, to get even a halfway ad­equate picture or idea (Vorstellung) of the extent of the devastation of the German cities. It was as though the Germans had entered into a tacit understanding that the true state of the moral and material destruction was not to be described, when what was surely called for was a steady gaze at reality (“Air War” 51E, 57G). And yet, Sebald has to admit, not everyone was capable of that steady gaze. This too was a large part of the devastation: it took with it the human capacity to understand. Faced with “the unmistakable signs of a catastrophe en­gul.ng the whole country, it was not always simple to bring into one’s sense of experience anything exact about the kind and extent of the de­struction. . . . The need to know (wissen) was contradicted by the ten­dency to close one’s senses (Sinne). [Stories circulated] that exceeded every capacity to comprehend.” The sense experiences of the survivors seem to have left them unaffected: “Apparently [the experiences] didn’t penetrate into the sensorium of those survivors who were there. . . .” and they subsequently tended to act “truly as though nothing had happened.”

But what would a steady gaze at reality have brought forth? How should the real circumstances have been presented? If, as Alexander Kluge, cited by Sebald, says, what happened “never became a pub­licly readable cipher,” how would a factual text have read? Sebald opens “Air War and Literature” with a page of sta­tistics about the bombings and concludes: “but what in truth all that meant—we do not know” . Statistics teach us next to nothing. On the contrary, Sebald comments, those documenta­tions that did appear were compilations, untouched, it seems, by their subject matter, and served first and foremost “to sanitize or get rid of a kind of knowledge that was incompatible with normal under­standing,” nor did those who compiled such data “understand the as­tounding faculty for self-anesthesia (Selbstanästhesierung) of a com­munity that, apparently, came out of a war of annihilation without any psychological damage to speak of.”

Sebald demands a language that closely follows upon the events of destruction and brings them into our memory, brings them “into [our sense of] experience,” which “carries [them] over the threshold of the national consciousness.” But the Germans, as he tells it, rather than bringing their (some­times non)experience of destruction to language and consciousness, rather than practicing a linguistic economy of representation or re­capitulation, instead raced headlong into the business of remaking the German economy. They substituted the production of the future-looking “economic miracle” of the postwar years for the past as a way to forget it. “This total destruction appears thus, not as a horrific end of a collective aberration, but, so to speak, as the first step of the successful rebuilding.” “After the devastation brought about by the enemy in war,” the rebuilding of the country made possible “the second liquidation of their own previous history” and made any remembrance impossible. The new progress, with all the weight that term will take on at the end of the essay as it turns to Benjamin, replaces and obliterates the past.

Sebald calls for a language that makes one see. It is in this regard that he complains of Arno Schmidt’s prose in Scenes from the Life of a Faun (Aus dem Leben eines Fauns): “however, I at least, when I read a passage like the following one, nowhere see that which it is sup­posedly about: life in the terrible moment of its disintegration.” How then does one look destruc­tion in the eye, close up? Perhaps he is going about this all wrong. Perhaps, after all, it is too much to expect that the Germans could mark their own demise. Recapitulation would be an open admission of defeat….