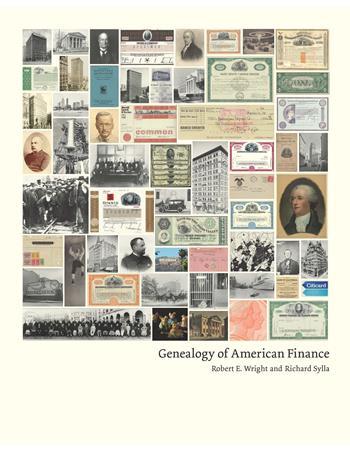 This week our featured book is Genealogy of American Finance, by Robert E. Wright and Richard Sylla. Today, we are happy to present Charles M. Royce’s foreword to Wright and Sylla’s book, in which Royce focuses on the importance of the Museum of American Finance both in the process of creating the Genealogy and in a broader cultural context.

I was introduced to the leadership of the Museum of American Finance through my friend and television personality, Consuelo Mack, who serves on the Museum’s Board of Trustees. During the course of my initial conversation with President David Cowen, I brought up an idea I have had for years, which is to trace the genealogies — or family trees — of the major American financial firms. I have been working in finance for more than 50 years and have witnessed first-hand many dramatic changes in the industry. So many firms that existed when I first began investing are no longer around.

Given that my firm looks for “value” in companies when we invest, I asked David if there was value in this idea. His response was that, indeed, this would be an invaluable research tool. This book is the first output of that discussion.

As the only independent finance museum in the nation, the Museum often fields calls from researchers inquiring about what happened to certain firms or banks — now defunct or acquired. Many times those questions have been difficult to answer. Moreover, the two main regulatory bodies, The Federal Reserve and the FDIC, do not have complete information and are, therefore, also unable to also answer those questions. According to the Museum’s exhibit team, an area of the “Banking in America” exhibit featuring an abridged genealogy of the Bank of America was the single largest piece of research that went into any section of the Museum’s permanent exhibits. This is largely because more than one hundred years’ worth of merger and acquisition data is so difficult to come by.

My conversations with David and the Museum team resulted in my commitment to underwrite a massive research project to compile these family trees and house them in a central location. It has taken well over a year of research — which included hundreds of hours of archival legwork — to compile these genealogies and make them publicly available.

I applaud Professors Wright and Sylla for their research and writing efforts, which have made this project a reality. As a Columbia University MBA, I am pleased to note that my alma mater has enthusiastically embraced this idea as well, and that this beautiful book has been produced by Columbia Business School Publishing.

Now, if the Museum receives a research inquiry about past financial firms, the staff is able to answer where that firm’s history fits into the modern financial landscape. Or, better yet, people can access the information themselves via this book or the Museum’s website.

This project sheds tremendous light into the dynamic nature of our nation’s financial history. One can never completely understand the future without a comprehension of the past. In an easy-to-read and understandable manner, this book gives a narrative history that is accessible to all — from the newcomer working at a bank to the finance professional, from the student to the scholar, from the practitioner to the regulator.

Please enjoy the book, as each chapter will transport you back in time to see the birth and growth of these 50 financial institutions.