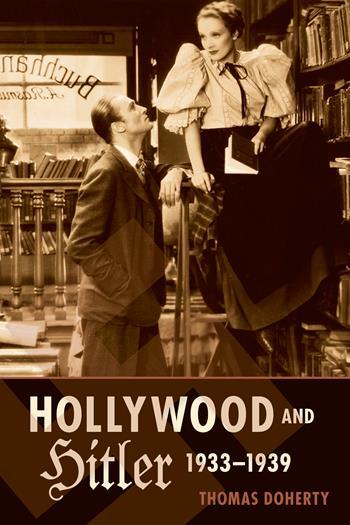 “Up until 1938-1939, there were really no anti-Nazi films from the major Hollywood studios….For most of the 1930s, the major studios were missing in action.”—Thomas Doherty

The following interview with Thomas Doherty, author of Hollywood and Hitler, 1933-1939, which is now available in paperback:

Question: Hollywood celebrities today are associated with a variety of different social and political causes. How was the situation different then and how did it curtail film stars’ anti-Nazi activism?

Thomas Doherty: In the 1930s, motion picture stars were typically very timorous about expressing their political opinions in public, especially if the sentiments were in any way controversial or left of mainstream opinion. Why alienate a potential customer at the ticket window? For their part, the studio heads considered the stars their own personal property, not unlike the costumes and props in the studio warehouses. They didn’t want anything to deplete the value of their investments. At first, only the most stalwart and secure actors and actresses defied convention and broke ranks.

Q: What effect if any did their activism have on shaping American attitudes towards Hitler?

TD: It’s hard to say, but the anti-Nazi activism of popular stars like James Cagney, Melvyn Douglas, John Garfield, Bette Davis, and Joan Crawford not only brought publicity to the cause but served to normalize the sentiments. The mere fact that movie stars—who more typically sold their faces for commercial endorsements—were now speaking out against Nazism, for free, made at least some people think about the reasons for the transition.

Q: Likewise, what impact did anti-Nazi films have on America’s perception on Nazism?

TD: Up until 1938-1939, there were really no anti-Nazi films from the major Hollywood studios. The Motion Picture Producers and Distributors of America discouraged overt political advocacy of any kind on screen. There were occasional exceptions such as Warner Bros.’ Black Legion (1937), a social problem film condemning a KKK-like group of domestic vigilantes, and Walter Wanger’s Blockade (1938), a veiled treatment of the Spanish Civil War, but not until Warner Bros. broke the embargo with Confessions of a Nazi Spy (1939) did Hollywood put identifiable Nazi villains on screen. For most of the 1930s, the major studios were missing in action.

Q: In addition to individual film stars, Hollywood executives, most of them Jewish, also played a role in anti-Hitler activism. What were some of the issues they confronted in balancing political beliefs with economic interests?

TD: The moguls—notably Jack and Harry Warner—always had to protect their right flank if they moved too far left. So at the same time Warner Bros. was the most outspokenly anti-Nazi of the major studios on and off screen, it was also the studio that most fervently embraced an unassailable red, white, and blue patriotism in its short subjects, feature films, and public pronouncements. When the American Legion held its annual convention in Los Angeles in 1938, Warner Bros. gave the veterans the run of its soundstages and backlots.

Q: What role did German emigres, many of whom fled Nazi Germany, play in informing Hollywood about what was happening in Germany and in shaping the content of particular films?

TD: The emigre community—the motion picture workers who established a veritable “Weimar on the Pacific” in Hollywood in the 1930s—were daily reminders of the racial and political persecutions in Germany. Most refugees were were so happy to be in sunny California that they didn’t want to jeopardize their status by leaping into controversial political activism: by and large, native born Americans—secure in their citizenship status—took the lead there. The emigre spirit certainly informed Hollywood feature films in all kinds of way—for example, in Fritz Lang’s social problem film Fury (1935), a preachment against mob violence and lynching. Of course, the influence would really erupt in the postwar era in the murky tones and paranoid atmospherics of the film noir genre.

Question: Another component of American awareness of Nazi Germany came through film newsreels. What balances or compromises did newsreel producers make? Did they provide a forthcoming, honest picture of Hitler?

Thomas Doherty: The newsreels are actually one of the most interesting and untold stories of the era. Our focus on Hollywood feature films sometimes makes us forget that the most powerful images of the Nazis came from the motion picture journalism of the day. The problem for the newsreels was that it was virtually impossible to obtain uncensored film of the Nazis in action. Nazi Propaganda Minister Joseph Goebbels controlled all outgoing motion picture imagery, which meant that when the newsreels showed the Nazis on screen, it was in Nazi—shot and—approved footage. As a result—and because unruly moviegoers would sometimes hiss and jeer at the Nazis on screen—the commercial newsreel companies often refrained from featuring the Nazis in the newsreels. Even when the newsreel editors did include pictures of Hitler and the Nazis in the newsreel issues, local exhibitors were known to cut out the clips so as not to disturb patrons out for an enjoyable night at the movies. The full motion picture record of the rise of Nazism—so vivid to us today—was not before the eyes of Americans in the 1930s.

Q: Your book also includes the odd but telling stories of Mussolini’s son and Leni Riefensthal’s sojourns to Hollywood. What do their stories tell us about Hollywood’s evolving attitudes toward fascism and its growing political awareness.

TD: Yes—the Hollywood Anti-Nazi League used the visits of Vittorio Mussolini in 1937 (in town to work out a a co-production deal with producer Hal Roach) and Leni Riefensthal in 1938 (she hoped to arrange a stateside distribution deal for Olympia [1938], her epic documentary of the 1936 Berlin Olympics) to discourage Hollywood from doing any business with the Nazis. The efforts of the Hollywood Anti-Nazi League made Mussolini and Riefenstahl social pariahs around town—and intimidating anyone else in the film industry from associating with them. The animus towards Riefenstahl— “Hitler’s honey,” they called her—was especially intense because she was perceived as a genius of the cinema who had turned her talents to a demonic cause.

Q: Which anti-Nazi movies do you find most compelling? Do they feel dated or do they still have resonance today?

I find MGM’s The Mortal Storm (1940) oddly affecting—ironically enough, because MGM was the Hollywood studio that had no qualms about doing business with the Nazis throughout the 1930s. Director Frank Borzage shows how the Nazis destroy a culture through the disintegration of a once-happy family, with the warm conviviality of the opening scenes turning to emptiness and death in the end reel. Ernest Lubitsch’s To Be or Not to Be (1942) is go-for-the-jugular satire at its best, though I can see why American audiences in 1942 were not amused. Of course, Casablanca (1942) still packs an anti-Nazi punch, especially during the scene where everybody in Rick’s Cafe sings “La Marseilles” and drowns out the Germans.

Q: What is the continuing legacy of Nazism and Hitler on Hollywood either thematically or visually?

TD: Check out Quentin Tarantino’s Inglouriuos Basterds. Hitler, Goebbels, the SS, the Nuremberg rallies, swastikas, and all the other images of the twelve year Reich remain the most visually striking manifestations of political evil in motion picture history. The pictures of Nazism first projected by Hollywood between 1933 and 1939 will always be before our eyes.