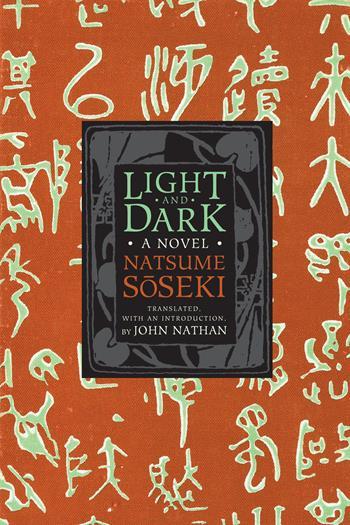 This week our featured book is Light and Dark: A Novel by Natsume Sōseki, translated with an introduction by John Nathan. Throughout the week, we will be featuring content about the book, its author, and its translator on our blog as well as on our Twitter feed and our Facebook page. Today, we have an excerpt from our earlier Sōseki publication, the nonfiction collection The Theory of Literature. In this essay, Sōseki addresses the use of “-isms” in literature and literary theory.

Don’t forget to enter our book giveaway for a chance to win a free copy of Light and Dark!

The Merits and Flaws of -isms
Natsume Sōseki

This brief essay, first published in the Asahi newspaper on July 23, 1910, constitutes one of Sōseki’s most direct responses to the literary theories of the Naturalist (shizenshugi) school of fiction, which held sway in Japanese literary circles at the time. While Naturalists advocated a confessional literature that sought to represent even the ugliest truths about human existence, Sōseki here advocates a more fluid view of literary value.

Generally what we call -isms or doctrines refer to something that a man of meticulous character has conjured up by sorting through an infinite number of facts, thereby making it easier for us to abstract them and store them neatly in the drawers of our minds. Because they are tightly bound and nicely tucked away, it is rather tedious to take them apart and tiresome to pull them out; as such, they often prove useless when needed. In this respect, most -isms are unlike the compass chariots that provide direct guidance in our daily lives and instead are mere filing cabinets created to satisfy our intellectual curiosity. They are not so much a composition as an index to one.

Simultaneously, many -isms take shape when a number of arbitrary yet similar examples are filtered through a relatively sophisticated mind and are further condensed by it. It isn’t exactly a form but more like the contours of one. It has no substance. We preserve only the contours of things and discard their substance for the same reason we carry paper money instead of coins—it is convenient for small human beings.

In this sense, -isms are like a company’s financial statement or, for that matter, like a student’s report card. Behind the single column of figures, behind the two rows of final grades there lies hidden the passage of time, a time in which many people experienced many things—their strivings, joys, and griefs; their successes and failures—all of which can never be repeated.

Therefore, -isms are founded upon events that have passed. They capture and consolidate the past, simplifying the history of experience. They are the contours or patterns of known facts. To address the future with these patterns is like anticipating all the events that will ever occur under the heavens and trying to fit them all into a man-made receptacle. Perhaps, for convenience’s sake, it is possible to apply such patterns to mechanical phenomena that exist in the natural world, especially to the simple ones that are prone to repetition. This is why scientists’ study can be projected into the future. However, if our mental lives were to fall under the sway of some -ism, that predetermined pattern would immediately cause us to feel constrained in our existence. To exist as the vehicle for some predetermined pattern is to perform a mechanical function for the sake of a lifeless shell. We would feel rage at the shame of being unable to develop mentally according to our own natural principles, at being unable to follow our own true contours.

When our minds feel this sort of shame, we experience a premonition that the past contours of things are about to crumble. We see the transgression of trying to project into the future recklessly and blindly and use that which simply cannot be projected into the future.

To assume that these -isms should govern us in the future because they have done so in the past and make decisions based on them because they appeared to work for a short period of time is simply reckless, like measuring height or length with a measuring cup.

It has been five or six years since the advent of Naturalism. I am sure that its advocates have their reasons for supporting it. As far as I know—and as far as I understand it (leaving aside the discussions that I do not understand)—not everything about it necessarily warrants criticism. However, Naturalism is an -ism. Whether it be in life or in art, it took a slice of history that developed for various reasons in the West, reduced it to a certain contour, and brought it over on a boat. It goes without saying that we do not live our lives to substantiate these contours. Naturalism is meaningful only when the substance of our activities naturally happens to conform with these contours.

The general public detests Naturalism. Naturalists make their doctrine sound like an eternal truth and attempt forcefully to apply it to every aspect of our lives. If the Naturalists pursued their ways a little more cautiously and with a little more patience, they would realize that they are accelerating their own demise. Rather than trying to sketch out a large enough circle to accommodate every aspect of human life and then trying to corral the future into it, I suspect it would be wiser for them to firmly hold on to one small particle within it and instead try to win recognition of the permanence of Naturalism through it.