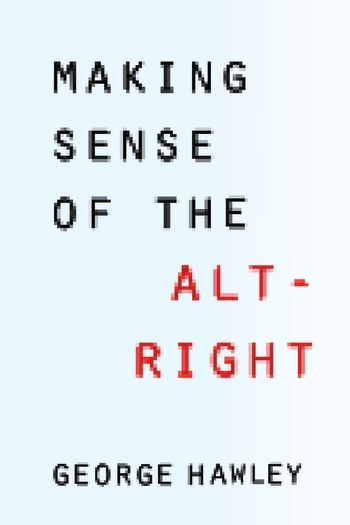 “In my experience with the alt-right, I encountered a surprisingly common narrative: Alt-right supporters did not, for the most part, come from overtly racist families. Alt-right media platforms have actually been pushing this meme aggressively in recent months. Far from defending the ideas and institutions they inherited, the alt-right—which is overwhelmingly a movement of white millennials—forcefully condemns their parents’ generation. They do so because they do not believe their parents are racist enough.” — George Hawley

This week, our featured book is Making Sense of the Alt-Right, by George Hawley. For the final post of the feature, we have pulled short excerpts from some of the many articles and interviews in which Hawley has appeared over the past few weeks, as newspapers, radio stations, and media outlets around the world have tried to make sense of the Alt-Right following the events in Charlottesville over the summer.

From an article by George Hawley himself in The American Conservative:

In my experience with the alt-right, I encountered a surprisingly common narrative: Alt-right supporters did not, for the most part, come from overtly racist families. Alt-right media platforms have actually been pushing this meme aggressively in recent months. Far from defending the ideas and institutions they inherited, the alt-right—which is overwhelmingly a movement of white millennials—forcefully condemns their parents’ generation. They do so because they do not believe their parents are racist enough.

In an inverse of the left-wing protest movements of the 1960s, the youthful alt-right bitterly lambast the “boomers” for their lack of explicit ethnocentrism, their rejection of patriarchy, and their failure to maintain America’s old demographic characteristics and racial hierarchy. In the alt-right’s vision, even older conservatives are useless “cucks” who focus on tax policies and forcefully deny that they are driven by racial animus.

From “Far-Right Groups Surge Into National View in Charlottesville,” in The New York Times:

George Hawley, a University of Alabama political science professor who studies white supremacists, said that many of the far-right members he had interviewed did not inherit their racism from their parents, but developed it online. Many of them had never heard of, say, David Duke, the former Louisiana politician and former leader of the Ku Klux Klan.

Dr. Hawley said he believed the far-left activists, known as antifa, were welcomed by the white nationalists. “I think to an extent the alt-right loves the antifa because they see them as being the perfect foil,” he said.

NPR’s Audie Cornish talks with Hawley on All Things Considered:

CORNISH: You’ve interviewed many people who consider themselves part of the alt-right. Can you give us a profile? Who does this ideology appeal to?

HAWLEY: I would say it is definitely a young movement. I’d say that it is predominantly white millennial men. It is not sort of stereotypically conservative in its profile. I’d say that probably it is a more secular population than the country overall. That is, there are a lot of agnostics and atheists or people who are just generally indifferent to religion. And I think that it is a fairly well-educated movement on average, that as I think that probably the model alt-right member has at least some college education.

George Hawley, an assistant professor of political science at the University of Alabama, said the “alt-left” term has been most aggressively pushed by Fox News Channel’s Sean Hannity, but it’s not a label anyone or group has adopted for themselves.

“There is no such movement as the alt-left. Obviously, there are left-wing extremists but there is no congruence between the far-left and the alt-right.”

From “Why is the US still fighting the civil war?,” published in the Race issues section of The Guardian:

George Hawley, a political scientist at the University of Alabama, and author of two books that examine dissident rightwing movements, says that national far-right movements have been attracted to the fight over Charlottesville’s monument partly from “opportunism, and a desire for controversy … But it also comes from their sincere feeling that attacks on confederate monuments are attacks on whiteness, per se.”

He says that the discussion around confederate monuments is indicative of the growing estrangement between a resurgent radical right, and an embattled mainstream conservatism. In the past, he says, “mainstream conservative media outlets were supportive of the maintenance of confederate symbols”, and did so under catchphrases such as “heritage, not hate”. This changed after Roof’s rampage in Charleston: establishment and so-called “movement” conservatives “stopped defending monuments”.

Listen to an interview with Hawley on the role that religion plays in the Alt-Right, via Christianity Today:

The alt-right is mostly comprised of young white men, according to Vox, which means they’ve spent most of their lives accessing the internet. As teenagers are wont do, they looked for a way to rebel. But instead of being limited by what library books they could check out or what their friends said, like in previous generations, all they had to do was Google, according to George Hawley, the author of the upcoming book Making Sense of the Alt-Right and an assistant professor of political science at the University of Alabama. They can find racist Pepe memes or check out the hub that is Reddit’s /r/The_Donald.

From “Fallout from modern protests: naming and shaming online,” published by The Christian Science Monitor:

George Hawley, a political science professor at the University of Alabama Tuscaloosa and author of the upcoming book “Making Sense of the Alt-Right,” notes that the doxxing of white supremacists began around the turn of the year, with some of the movement’s once-incognito leaders – including “Mike Enoch” (actual name Mike Peinovich) and “Millennial Woes” (real name Colin Robertson) – becoming household names.

The same may be true for the Charlottesville protesters, Hawley believes, and being publicly named could even cement their alt-right ideologies.

From “The Women Behind the Alt-Right,” via The Atlantic:

“Many alt-right men like it when they have women who are contributing content, recording podcasts, making YouTube channels. That’s because women in this movement have an easier time amassing followers,” said Hawley.

According to Hawley, outspoken women on the alt-right are particularly effective mechanisms for recruitment. Because there aren’t many of them, a female alt-right blogger, YouTube star, or Twitter enthusiast attracts more attention than a young white man who fits the alt-right stereotype. “Women make the movement seem more normal,” Hawley said.

Hawley commented on the nonexistence of the “alt-left in “March on Google Organizers Cancel Protest Over ‘Alt Left Terrorist Threats’”, published by Fortune:

“There is no such movement as the alt-left,” George Hawley, an assistant professor of political science at the University of Alabama told CNN. “Obviously, there are left-wing extremists but there is no congruence between the far-left and the alt-right.”

While “alt-right” was coined by white supremacist Richard Spencer and adopted as a moniker by many on the far-right, Hawley says the term alt-left has been most aggressively pushed by Fox News Channel’s Sean Hannity rather than any group or ideology.

From an article in Harper’s Magazine, “The Rise of the Valkyries: In the alt-right, women are the future, and the problem”:

“What sets it apart,” according to George Hawley, the author of the forthcoming Making Sense of the Alt-Right, “is the ability to troll itself into the conversation.” Supporters draw attention to themselves online, he told me, “by acting as parasites, starting fights with people who have hundreds of thousands of followers.” In amateur videos, anonymous comments, and pithy tweets, they mercilessly mock people they disagree with, hoping to fluster or offend.

From Politifact‘s discussion of whether there are “white nationalists in the White House”:

George Hawley, a University of Alabama political scientist and author of the forthcoming book, Making Sense of the Alt-Right, said he “would probably not describe any high-ranking White House officials as white nationalists.” He added, however, that “important members of the Trump administration can definitely be described as right-wing populists and nativists. These are ideological stances that deserve criticism, but white nationalism is a much more extreme ideology.”

Hawley also appeared in interviews with Seattle’s Morning News with Dave Ross, The Michelangelo Signorile Show on SiriusXM PROGRESS, and with Radio Sputnik: