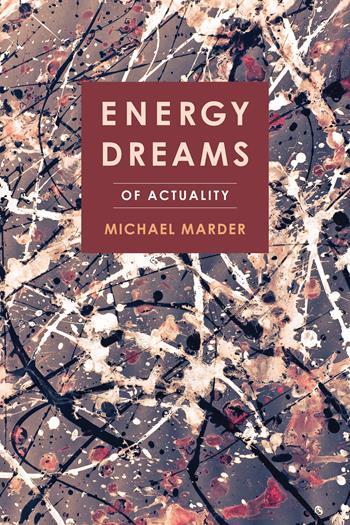 “Like a magic wand, energy is a kind of thing that makes all other things (indeed, everything and everyone) possible. With the caveat that, in its current form, this terrible wand burns, evaporates, brings to naught, or otherwise destroys whatever and whomever are already in existence in order to fuel the realization of our desires. The problem is, perhaps, that we conflate energy not only with its types but also with power lacking any inherent ends.” — Michael Marder

This week, our featured book is Energy Dreams: Of Actuality, by Michael Marder. Today, we are happy to provide an excerpt from another article by Michael Marder, originally published at The Philosophical Salon. Read the article in full here.

Don’t forget to enter our book giveaway for a chance to win a free copy of Energy Dreams!

We are preoccupied, at best, with many types of this desired object: chemical, kinetic, potential, solar, nuclear… We sift through countless examples of energy structuring our existence, yet we are at a loss when it comes to pointing out what characterizes energy itself. Numerous unexamined assumptions are, to be sure, built into our relation to it, and one of these has already popped up here, namely the assertion that energy is a “desired object.” It is treated as a resource, an apple of discord at the heart of geopolitical conflicts and ecological concerns. But are we justified in reducing energy to its objective dimension? Is it not equally a subject, that is to say, an active or animating force flowing through and in us? Are we not transported to a place beyond straightforward oppositions between activity and passivity when we say in the grammatical passive voice we are energized, invested with the capacity to be capable?

Like a magic wand, energy is a kind of thing that makes all other things (indeed, everything and everyone) possible. With the caveat that, in its current form, this terrible wand burns, evaporates, brings to naught, or otherwise destroys whatever and whomever are already in existence in order to fuel the realization of our desires. The problem is, perhaps, that we conflate energy not only with its types but also with power lacking any inherent ends. As a result of this conflation, our theme is imbued with abstract negativity promising to gift us with everything we are dreaming of on the condition of devouring the world of actuality as a whole.

We ourselves are not safe from the lethal power emanating from energy in its contemporary permutation. Energy independence is never our independence from a predominantly negative energy. While we hanker after it, we forget that we, too, are it. If we hoard the precious commodity behind or in every commodity, we do so with the view to extending the super-capacity it grants us into the future, so as to continue being capable to accomplish whatever we wish. Unless, as it tends to happen, the actual ends for which the capacity to be capable is accumulated drop out of sight altogether. This abolition of the limit confirms that energy is more than a thing, more than any objective manifestations, types, and materials that may be hoarded. Let us call such an excess energy’s work.

I have chosen the term “work” advisedly. My choice conveys something of the meaning Aristotle originally invested in the Greek energeia, whence our English word derives. The literal sense of Aristotle’s coinage is “at-work” or “in-the-work,” en + ergon. Although the difference between them appears negligible, these equally valid translations exemplify the dual nature of energy as a process and a product, an indomitable force and a resource. At work, it remains under way, active and acting. In the work, it is objectified, placed at our disposal. An entire history of Western philosophical concepts may be ferreted out from the complementary renditions of the Aristotelian notion, including the early modern split between the object/substance and the subject, Hegel’s attempts to reconcile the two under the aegis of Spirit, and Nietzsche’s insistence that there is “no doer” behind the deed itself and behind what is done.

You might notice that, remarkably, the static and the dynamic aspects of energy coincide in Aristotle’s word. For all that, the Greek philosopher resorted to energeia to label what is “not-dunamis” (i.e., not-potentiality), or, positively put, actuality. Instead of a magic wand, which may grant any wish and with which we associate energy today, the original concept referred to the fullness and stability of what was present after all the potentialities had been actualized. For us, moderns, conversely, energy is vigorously mobile and restless, purely potential, subversive of actuality even in its objective form as a bunch of “resources.” We put the ancient idea on its head and make it so undetermined and open-ended that our energetic exertions are never ultimately satisfied, never totally actualized in their outcomes.