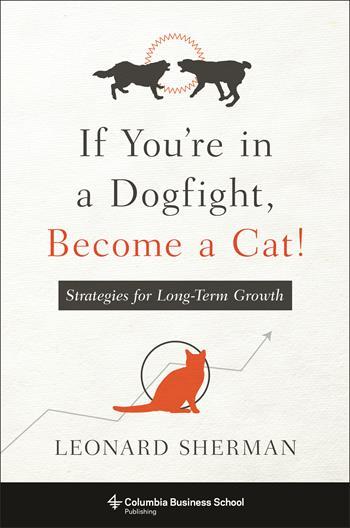 “These harsh realities point to two burning questions of relevance to all senior executives: 1. Why is it so hard for companies to sustain above-market business performance? 2. What can companies do to beat the odds and crack the code to securing the holy grail of business: long-term profitable growth?” — Leonard Sherman

This week, our featured book is If You’re in a Dogfight, Become a Cat!: Strategies for Long-Term Growth, by Leonard Sherman. For the final post of the week’s feature, we are happy to present an excerpt from a short manifesto by Sherman, posted at 800-CEO-READ’s ChangeThis magazine. You can read the post in full here.

Don’t forget to enter our book giveaway for a chance to win a copy of If You’re in a Dogfight, Become a Cat!.

In all human endeavors we tend to revere stars that perform at a superior level over a long and illustrious career. Sports Hall of Famers Aaron, Montana, Jordan, Pelé, and Nicklaus and arts honorees Ozawa, Tharp, and Simon have earned legendary acclaim for performing immeasurably beyond the reach of most mere mortals.

In business, as well, a few widely recognized companies have been able to deliver consistently superior growth over the long-term, including Amazon, who last year became the fastest company to reach $100 billion in sales, and J&J, 3M, and The Ball Corporation, each of whom has been out-innovating and outgrowing the overall market for more than a century.

The Elusiveness of Long-Term Growth

But these are exceptions to the rule that most companies are unable to sustain superior growth. For example, in perhaps the most definitive study of long-term business performance, the Corporate Executive Board (CEB), analyzed the long-term revenue growth of approximately five hundred Global 100 and other companies over the past half-century. The study found that only 13 percent of large enterprises could sustain a real annual revenue growth rate of as little as 2 percent over successive decades.

Given increasing globalization and technological disruption, it is becoming harder than ever for companies to sustain growth. Researchers at the Deloitte Center for the Edge found that the “topple rate,” measuring the frequency with which companies lose their market leadership position from year to year, has grown by nearly 40 percent over the past forty years. The consequences of stalled growth are severe, often leading to a collapse in market value, bankruptcy, or strategic exit at distressed prices. In fact, the average life expectancy of a Fortune 500 company has declined from around 75 years half a century ago to less than 15 years today.

Nonetheless, CEOs are an optimistic lot, and have continued to promise superior results, despite the long odds against sustained growth. Bain consultants James Allen and Chris Zook examined the annual reports of the Forbes Global 2000 and found that, on average, CEOs projected that their company would grow at twice the rate and be four times more profitable than the industry average. In other words, as Allen waggishly notes, “the entire world of business is projecting to take share from the entire world of business.” But after examining the performance of the Global 2000 over the decade 2001–2011, Bain found that only about 10 percent of companies actually met their growth targets.

You can read the post in full at 800-CEO-READ’s ChangeThis magazine.