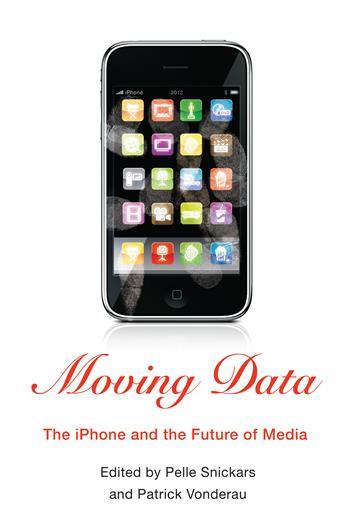 For the iPhone’s 10th birthday, take a look back at the iPhone’s history with an excerpt from Moving Data: The iPhone and the Future of Media, by Pelle Snickars and Patrick Vonderau. In this section, Snickars and Vonderau explore what makes the iPhone distinct as both a device and an object of study. They also consider how the device grew out of other technologies and take a look at its historical precedents.

A History of Possibilities
Pelle Snickars and Patrick Vonderau

In order to come to terms with Apple’s iPhone, it is important to consider the dynamic intersection among these marketing, technological, and cultural forces. Despite the iPhone’s economic success, elegance, and “revolutionary” newness, the question still remains how and why to engage in studying the iPhone as a media object in the first place. In their seminal book, Digital Play: The Interaction of Technology, Culture, and Marketing, Stephen Kline, Nick Dyer-Whiteford, and Greig de Peuter suggest investigating this interdependent dynamic of technology, culture, and marketing efforts as propelling the “circuit of capital” and growth in information capitalism. The political economy of media provides a critical but fairly general perspective on the iPhone as an “ideal-type commodity form,” one that reflects the social organization of capitalism at its present moment. Recent ventures into the field of media-industry analysis have testified to the productivity of this critical tradition. Focusing solely on the iPhone “moment” in the media history of consumer capitalism, however, also introduces a number of fallacies that obscure—rather than clarify—what seems to be at stake. To favor the emergent and the immediate at the expense of the old and the contingent, or of failures and devaluation, often leads to a skewed picture of innovation processes and of media history generally, and potentially even to a fetishization of branded consumer products, which the iPhone epitomizes.

Archeological sensitivity is thus needed to unearth the wider network of technologies, discourses, and cultural practices within which the iPhone appeared, and also the detours, dead ends, and abandoned and discarded models that accompanied or preceded its rise to fame. Consider, for instance, how the American journalist Robert Thompson Sloss (1872–1920) in 1908 envisioned the future of mobile media in his contribution to the German book Die Welt in hundert Jahren. One century before the iPhone was launched, Sloss rightly predicted the advent of a “wireless century” marked by the availability of “pocket phones” that would allow instant and worldwide connections between individuals or even groups, for personal conversations from the North Pole as much as for conference calls to New York City; for transmitting sounds and music, moving images, and written documents; and even for making bank payments. Although Sloss erred in stating that the mobile phone would drastically diminish criminality, he correctly identified its role as a medium of surveillance and news reporting in situations of crisis and political change.

Somewhat unique in their precision, his observations still have to be seen as part of a much broader discourse of the imaginary, as one example of a sense of anticipation informing the history of ideas and technological try-outs on which our present understanding of “new media” is founded. Following the development of photography (1810s), telegraphy (1830s), the telephone (1876), the phonograph (1877), moving pictures (1880s), and wireless telegraphy (1895), the “liveness” of simultaneity had become an experience and an object of experimentation by the late nineteenth century. Crystallizing around ideas of mobile televisuality, as exemplified in Sloss’s 1908 vision of a pocket wireless, this cultural imagination took form in endless patents and variants before “smartphoning” developed as its current cultural practice. For evidence of the arbitrariness of the trajectories that led to the present, one might point to early plans for videophone systems such as the (never realized) telectroscope in 1877, for instance, or to the close interrelation of transportation, music listening, and wireless (radio) communication since the 1920s or to the attempts to develop portable electronic devices to increase workplace efficiency in the 1990s. To stick to this last point, it was with the “Palm-Pilot,” the first generation of handheld digital assistants, that the notion of “palms” entered the vernacular as a synonym for such devices. Research in Motion released its iPhone variant, the Blackberry, in 2002, and as one of the first convergent mobile gadgets it instantly became popular within the marketplace by concentrating on e-mail functionality for the business sector. As with other smartphones, the BlackBerry surfed the Web, yet its small screen size and lack of a multitouch display made it a weak competitor after the introduction of the iPhone. Today, RIM and its BlackBerry still hold a 15 percent share of worldwide smartphone sales, yet even with a constant line of new models, the company has not come close to matching the cultural impact of the iPhone. One key reason is that Apple has been aiming its smartphone toward the individual user rather than enterprise sales—though this is not to say that Apple is all about “communicative capitalism,” to invoke Jodi Dean’s suggestive term.

Situating the iPhone within this wider history of possibilities allows distance from the spectacle of innovation and the “mise-en-scène of advertising” that characterize the current view on transient media. Today, one may easily tap into the truism of convergence by declaring the iPhone to be the “universal remote” for all sorts of available media content, thus reducing media change to techno-teleologies and downplaying the wildly divergent meanings that the iPhone or any other medium might take on, depending on the contexts of its use. But even if one is sensitive to the political dimension of the iPhone’s uses and to the ways “its presence activates and embodies a variety of heterogeneous forces within and around a space,” the question remains how to address or, rather, how to nail down this particular device analytically, given its slippery, hybrid, ever-changing nature. Is this about mobile communication, smartphones, or the impact of a global brand on the entertainment sector? Or rather about innovative forms and formats and the platforms by which they are disseminated and made part of everyday practices? Or, again, about a medium and the way it regulates access to apps, music, games, videos, people, and media practices? And then, of course, there is not one single iPhone but rather four consecutive models so far, with a constantly modified operating system. So, what, indeed, are we talking about?