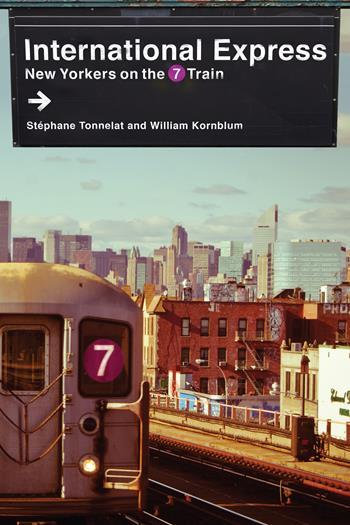 “You’ll meet people all over the world who will say, “Oh yeah, I used to live in New York. I used to ride the 7 train or 6 train. I used to get off [at] this station”—and they’ll tell you the station. They may have never succeeded in becoming Americans, or never wanted to, but they became New Yorkers, to the extent that they could use the transit system to get around.” — William Kornblum

This week, our featured book is International Express: New Yorkers on the 7 Train, by Stéphane Tonnelat and William Kornblum. Today, we are pleased to present excerpts from some of the great press attention that the book has received.

Don’t forget to enter our book giveaway for a chance to win a free copy of International Express!

First, in The Atlantic‘s CityLab blog, Tanvi Misra interviews Tonnelat and Kornblum about what their ethnographic research on the 7 train has taught them about the subway line, New York, and the immigrant experience:

One of the young people cited in the book noted something very interesting: How a person swipes the Metrocard can divulge whether or not they live in the city. That anecdote highlights one of the main arguments you’re making in the book, that taking the subway helps newcomers assimilate and develop a common identity, not just as riders of a particular train line, but as New Yorkers. Could you talk about that?

Tonnelat: The competencies that people learn on the train are, in fact, urban competencies. They can be applied anywhere. That way, the subway opens up the city materially, through [access to different places around the city], but also socially.

Kornblum: You’ll meet people all over the world who will say, “Oh yeah, I used to live in New York. I used to ride the 7 train or 6 train. I used to get off [at] this station”—and they’ll tell you the station. They may have never succeeded in becoming Americans, or never wanted to, but they became New Yorkers, to the extent that they could use the transit system to get around.

At the Brick Underground Live blog, Alanna Schubach talked to Tonnelat and Kornblum about the changes along the 7 line, service changes and delays in the subway system, and the impact of immigration policy on the 7 train’s ridership:

The subway can be an “equalizer” in the sense that New Yorkers of different ethnicities, nationalities, and incomes find themselves crowded together in one small space. What are some of the advantages and disadvantages the passengers you interviewed identify about this?
No one we spoke to said they enjoyed subway crowding, and from time to time, some complained about being forced to squeeze in next to people whom they sensed were “foreign.” But overall, 7 riders tended to “get along to go along,” which in practical terms means they are less concerned about ethnicity and race than about individual courtesy and subway competence. Some even said they learned a lot about other groups and nationalities over their years of riding the trains.

Overall, the subway is a great equalizer in the sense that it offers New Yorkers access to the whole city independently of race, ethnicity, gender, or age (within limits). It does not mean that there is no discrimination or harassment on the train, a problem that we discuss at length, but that thanks to the subway, equality of access becomes a generally shared value. This is one of the characteristics of the subway that help riders become New Yorkers.

Professor Kornblum, an emeritus professor of sociology at the City University of New York Graduate Center, and Mr. Tonnelat, a French ethnographer, explore what they perceptively describe as the challenges of integration in a “situational community in transit.” Their research is culled from diaries, written by students with immigrant backgrounds, who recounted their daily rides.

Drawing on the recommendations of Richard Ravitch, a former chairman of the Metropolitan Transportation Authority, the authors make a compelling case for elected officials to seize responsibility for the subway system and to invest in it. The region depends on the system for its survival and not just for transportation.

“The fleeting interactions on the 7 train are part of an urban middle ground between the parochialisms of family and neighborhoods, and the larger horizons of America,” the authors conclude. “On their way to becoming American, riders of all origins are helped by the subways to first become ‘New Yorkers.’”