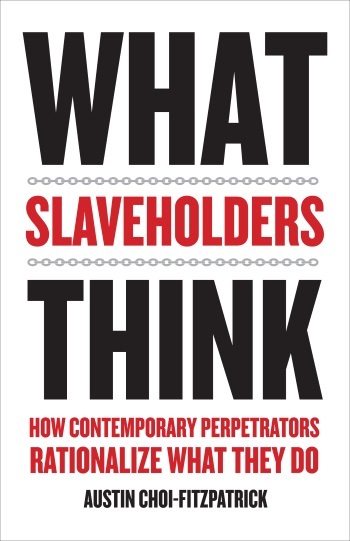 “The public square is celebrated by scholars of democracy as a pillar of free and open society. But to slaveholders this space is a cauldron of ‘enmity, ego, and hatred’. Free workers spending their free time talking about life is what gives democracy its vitality – no wonder it’s perceived to be a threat to those who have benefitted from the caste hierarchy. To the erstwhile slaveholder, leisure activities – talking, idling, drinking – are vices, tangible manifestations of social decline.” — Austin Choi-Fitzpatrick

This week, our featured book is What Slaveholders Think: How Contemporary Perpetrators Rationalize What They Do, by Austin Choi-Fitzpatrick. In today’s post, an excerpt from an article published at The Huffington Post, Choi-Fitzpatrick explains why he took his unique approach to researching modern slavery.

Enter our book giveaway for a chance to win a free copy of What Slaveholders Think!

I often get asked why I wrote a book about contemporary slaveholders. Once people get over the fact that slavery still exists they want to know who on earth is out there, right now doing what it takes to exploit their fellow humans in the worst sort of way?

At the moment the contemporary anti-slavery movement has raised over a billion dollars, reduced the vulnerabilities of untold millions, and brought thousands out of exploitation. Yet we know little about the individuals committing these crimes. I’ve been doing this work for almost 20 years and can tell you this: we know as much about slaveholders today as we did about victims two decades ago; hardly anything.

I set out to change that. In conversations with hundreds and hundreds of people—perpetrators and their victims, local government officials and rights activists—a picture of the life and times of contemporary slaveholders began to emerge.

In case after case, slaveholders targeted by human rights groups told me that they missed the old days. They told me that they wished for a brighter future for their children but that they themselves had been overlooked. Rights groups, broad economic factors, powerful political players, and even their victims, now had all the power.

Some solutions to slavery and trafficking are easier to see once we factor in what slaveholders think. Recognizing that they themselves are only doing what they can to get by doesn’t justify criminality and abuse, but it does suggest that some more traditional development solutions—alternative livelihood projects and microcredit included—may hold potential for emancipation among both perpetrators and victims. Of course. for freedom to be sustainable minds must be changed—that’s why it’s as important as ever to focus community organizing and human rights empowerment efforts at grassroots struggles for freedom.

The goal is not to equivocate between bonded labor and impoverished slaveholders, but instead to emphasize that slavery is relational, emancipation is complex, and the goal of ending slavery in our lifetime will require strategies that address the reality of the situation rather than the way it may appear in our imagination.

Read the article in full at The Huffington Post.