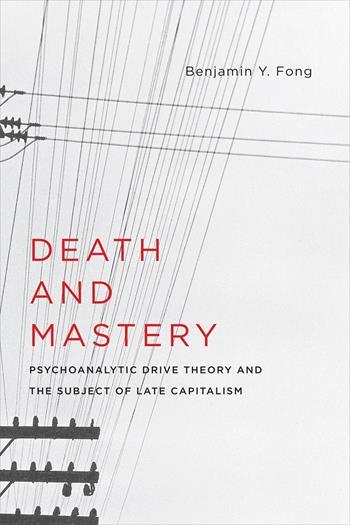 “[W]hen I help formulate the institutional statement that condemns x, or sign a petition to defend y, or go to a rally with a clever sign for z, what am I doing? Perhaps, in all or some of these activities, I am displaying agency – I, as an independent decision-maker, am doing something. But perhaps I am also mobilizing my half-education toward the maintenance of incomprehension and false projection.” — Benjamin Fong

This post is part of an ongoing series in which Columbia University Press authors look at the implications of the result of the 2016 presidential election. In this post, Benjamin Y. Fong, author of Death and Mastery: Psychoanalytic Drive Theory and the Subject of Late Capitalism, looks at the tendencies of Horkheimer and Adorno’s “new anthropological type” and sees causes for concern in the wake of the 2016 election:

The Disaster of Half-Education
By Benjamin Y. Fong

My first book, Death and Mastery: Psychoanalytic Drive Theory and the Subject of Late Capitalism, was published by Columbia University Press on election day 2016. It is above all an attempt to use psychoanalytic theory, like the original members of the Frankfurt School, to make sense of the tendencies of what Max Horkheimer and Theodor Adorno called “the new anthropological type.” At times, they described this new kind of capitalist subject as an actual psychological type very reminiscent of the Left’s stereotyped Trump supporter: this type rigidly adheres to conventional values; bears a submissive, uncritical attitude toward idealized moral authorities of the ingroup; has a tendency to be on the lookout for, and to condemn, reject, and punish people who violate conventional values; is opposed to the tender-minded; has a disposition to believe that wild and dangerous things go on in the world; etc. (See Peter E. Gordon, “The Authoritarian Personality Revisited: Reading Adorno in the Age of Trump”). It’s all quite spooky.

At other times, however, the new anthropological type was for them less an actual type of person and more an emergent set of tendencies in thinking brought on by the birth of what they called “the culture industry.” Loosely defined, the culture industry refers to the forms of media (film, television, radio) invented and propagated in the first part of the twentieth century. Many commentators on the work of the Frankfurt School believe that their views of the culture industry are dated, trapped in the Fordist-Keynesian era of mass production and consumption, but I have a difficult time understanding this line of thought. That we watch Emma Stone instead of Greta Garbo, that our kids know the new Disney characters instead of the old ones, that we’re all constantly looking at screens instead of reserving a few hours after work for them – none of this adds up to any qualitative break. No doubt the invention of the internet and the forms of social media that go along with it demand an updating of the culture industry thesis, but it’s hard to see how they don’t reinforce the ability of mass media institutions to categorize and cater to commodity consumers.

For the Frankfurt School, the birth of the culture industry changed the nature of capitalist subjectivity: whereas the classical bourgeois subject was trained for self-mastery and burdened by an excessively punitive superego, the new type of human being formed by the culture industry feels less guilty about failing to live up to some moral or personal ideal, very willingly indulges in the latest entertainments, and generally appears less repressed and deadened by alienated labor. In one sense, the new anthropological type may be better off than its predecessor: hearing my friends and myself prattle on about the really great new television show, it’s hard not to believe that the culture industry touches a deep need for a fantasy or alternate reality within which people want to lose themselves (in the book, I associate this need with what Freud called the death drive). But in another sense, the new anthropological type is a dangerous new phenomenon, implying as it does the possibility of a real end of psychic subjectivity as we have come to know it through psychoanalysis. In what follows, I will discuss three ways in which the tendencies of the new anthropological type are cause for concern. The first two are explored in more depth in Death and Mastery, but the importance of last has only hit home since the election.

First, the kind of pleasure provided by the culture industry is a domesticated and direct one: domesticated because it is designed to be a form of relief from an everyday mundaneness and exhaustion in work, and direct because it does not travel along the path toward sublimation. For Freud, the child’s original demand for pleasure in its polymorphous forms must come up against the hard rock of lack and frustration, and thereby be modified in accordance with physical or social reality. In finding higher forms for expression that are allowed by the child’s growing sense of reality, pleasure is sublimated, and it is this sublimation that is responsible for language, art, philosophy, and indeed culture itself. The pleasure afforded by the culture industry does not need this kind of work: we don’t need to internalize grammatical intricacies, we don’t need to practice scales, we don’t need to carefully work through arguments. We can just plug in and forget, and in forgetting, drain ourselves of the libidinal energy that could be channeled toward cultivation and protest against the conditions that require domesticated forms of relief.

Second, the new anthropological type is rigidly unidirectional and instrumental: the aim is always to be living up to goals, efficiently completing tasks, hitting regular milestones, etc. For this reason, Adorno describes the new type as “Vor-Sich-Hinleben,” or “living straight ahead.” The little reflection this subject does do pertains to whether or not the ego is living up to the goals it has set for itself. The superego has thus been transformed into a motivational coach, pretty severe when tasks have not been completed but ultimately not much an ethical compass. In alternating between work and private life, the new anthropological type switches regularly between this cold goal-drivenness and a lapse into self-forgetting, between states where the ego is fully in charge and where there appears to be no ego at all.

A third way in which the new anthropological type is damaged, which I been thinking about too much since the election, is by what Horkheimer and Adorno call a Halbbildung, translated sometimes as “half-education” and sometimes as “pseudo-culture” (“half-culture” and “pseudo-education” both work too). For them, the classical bourgeois model of Bildung (the process of cultivating free, mature, creative individuality) was always a lie in capitalist society, but at least it held out the dream of autonomy. The culture industry imagines itself to be democratizing culture, making Bildung available for all: everyone can read the newspaper, listen to the radio, or watch the television and have an opinion about politics, technological advance, social decline, the arts, etc. But what it actually does is replace one form of heteronomy with another:

Thanks in part to the mass media of radio and television, the pre-bourgeois conception of the world – essentially the traditional religious conception – was destroyed there in a short space of time. It was displaced by the spirit of the culture industry. Nevertheless, the a priori of the essentially bourgeois concept of culture – autonomy – had no time to develop. The authority of the Bible is replaced by the authority of the stadium, television, and “true stories” which claim to be literal, actual, on this side of the productive imagination.1

Flooding areas untouched by “high” culture, the culture industry was, from its inception, a new kind of church, a new spur to collective effervescence; but in place of moral orientation, it delivers a compulsory half-education. Thus, whereas cultural “knowledge” was not demanded of most people before the first part of the twentieth century, now everyone must be in the know, up to speed, shocked and appalled, and ready with opinions.

The question that Horkheimer and Adorno are trying to get us to ask ourselves in confronting this historical breach is something like this: when I sit down with my friends for coffee, what am I doing when I recite lines from articles about Trump that I’ve read online, or talk about the shows I’m watching, or how the local sports team is doing, or how degenerate the base of the political party that I oppose is? Let me push the question into more difficult territory: when I help formulate the institutional statement that condemns x, or sign a petition to defend y, or go to a rally with a clever sign for z, what am I doing? Perhaps, in all or some of these activities, I am displaying agency – I, as an independent decision-maker, am doing something. But perhaps I am also mobilizing my half-education toward the maintenance of incomprehension and false projection.

The half-educated who, unlike the merely uneducated, hypostatize limited knowledge as truth, cannot endure the breach between inward and outward, individual fate and social law, appearance and essence, which for them is heightened to unbearable levels…. The half-educated reach out stereotypically in their fear for the formula which suits their need, now to justify the disaster which has happened, now to predict the catastrophe still to come, which is sometimes disguised as regeneration. The explanation, in which their own desires appear as an objective power, is always as external and meaningless as the isolated event itself, at once feeble-minded and sinister.2

The hypostatization of limited knowledge as truth, the lack of patience for anything that doesn’t fit neat formulas, the constant amazement at just how feeble-minded and evil other people can be, all marshaled to cover up a basic lack of understanding of the contradictions of capitalism – an untimely critique has never been so apropos.

All of this may strike the reader with some knowledge of the Frankfurt School as conforming perfectly to their image as do-nothing mandarins, but I don’t think the lesson here is that any seemingly independent thought or action is always already prescribed. It’s rather that if we are not able to recognize the deep psychic damage done by late capitalist society and the variety of stereotyped, conventional ways in which we, the half-educated,3 think and do, then we have allied ourselves ahead of time with the rigidity we want to fight. The challenge of the Frankfurt School was to have proposed that a real and sometimes debilitating hesitancy is also a capacity for independent action. The half-education we receive at the hands of the culture industry works against this hesitancy, giving us headlines in all caps, turning debate into intellectual jousting with clear winners and losers, reducing messages to tweetable posts, and stoking ire with reference to what is supposedly obvious. It is certainly possible to work toward undoing the effects of this half-education – the Frankfurt School would not have written anything if they didn’t believe this to be possible – but not with any self-righteousness about who we, the subjects of late capitalism, really are.