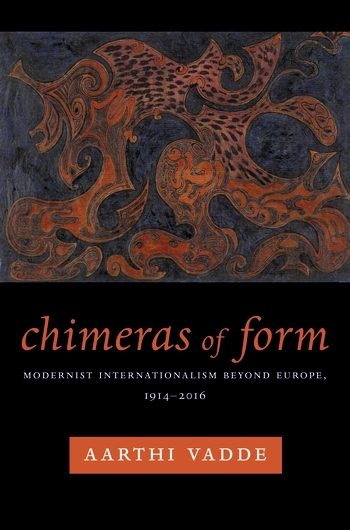 “I am most interested in those moments in modernist and contemporary fiction where unachievable dreams of global transformation yield critical insights into the world as it currently exists.”—Aarthi Vadde

The following is an interview with Aarthi Vadde, author of Chimeras of Form: Modernist Internationalism Beyond Europe, 1914–2016. In the interview, Vadde discusses how literature and literary form allows us to see the possibility of internationalism and communal politics in a new way. She considers how the work of writers such as Zadie Smith, James Joyce, and Rabindranath Tagore explore and critique imperialism and globalization and imagine new political communities.

Question: Why look to literature for ways of understanding the possibilities and limitations of internationalism and international community?

Aarthi Vadde: It’s an important question. Part of my argument in Chimeras of Form is that literature is an overlooked medium for thinking about internationalism and international community. People are much more likely to turn to the discipline of history for an account of specific international movements or political philosophy for a definitional or normative account of internationalism. But literary works are vital too because they take us into zones of experience and imagination that history and philosophy cannot reach.

The writers that interest me most, from Rabindranath Tagore to Zadie Smith, reflect on the lived conditions of imperialism and globalization; they regard internationalism as a communal aspiration that confronts the day-to-day ambiguities and inequalities of these large-scale formations. Such ambiguities and inequalities are often invisible in expository language, but they become palpable through literary language. The study of literature returns abstract theories of internationalism to specific cultural milieus. Moreover, literary works open up political formulations of international community to poetic forms of examination and reinvention.

Q: How did this discourse or imaginings of internationalism change over the period you cover in the book?

During and after World War I, many writers, artists, intellectuals, and politicians expressed the need for international cooperation as an antidote to national competition and aggression. The League of Nations was founded in 1920 as a bastion of liberal internationalism, and it sponsored the International Committee on Intellectual Cooperation (ICIC), which boasted an elite membership: Henri Bergson, Marie Curie, and Gilbert Murray among others. Its events brought Albert Einstein, Rabindranath Tagore, H.G. Wells, and Thomas Mann into the fold. The ICIC associated internationalism with cross-cultural understanding, but that only went so far. It was a largely European affair, and, as Tagore, James Joyce, and other writers in my book point out, such cultural internationalism could not fully flourish on the back of colonial exploitation.

The discourses of internationalism that interest me most are the ones that sought to blend proposals for cultural exchange with materialist critiques of the conditions that make such exchange difficult or coercive across continental and global lines of power. We see such imaginings of internationalism stirring in the 1910s-20s and peaking in the 1950s and 1960s during the era of decolonization. They persist through to the 21st century even if their targets of criticism have changed. Whereas the British Empire was the target of internationalist critique in the first half of the twentieth century, we now see global institutions like the World Bank, human rights organizations, and transnational states like the European Union come under scrutiny for extractive economic policies, political interventionism, and racialized immigration and asylum laws. The key now is to balance criticism and reform of these internationalist institutions with support for their existence in the face of resurgent xenophobic populisms worldwide.

Q: In looking at the title of your book, why use the concept of the chimera as an effective way to think through the questions your book asks?

AV: In common parlance, “chimera” has a negative association. Chimeras are pipe dreams, idle fancies, figures for the impossible or unrealistic pursuit. From the interwar years to the present moment, internationalism has borne the taint of naïve idealism. Instead of being embarrassed by internationalism’s chimeric associations, I embrace them as an opportunity to rethink the range of the possible in literature and in politics. I am most interested in those moments in modernist and contemporary fiction where unachievable dreams of global transformation yield critical insights into the world as it currently exists.

There is of course a second and older definition of chimera. In mythology, the chimera refers to a monstrous creature with the head of a lion, the body of a goat, and the tail of a serpent. This creature is a grotesque, a figure that seems to deform beauty by creating a whole out of disparate parts. The chimera thus flies in the face of traditional measures of aesthetic form, such as unity, symmetry, and harmony. These qualities curiously enough also operate as measures of the identity and health of political communities. The chimera presents us with an alternative model of wholeness, which is richly metaphorical. It helps us think about political communities not as organic and seamlessly unified entities, but as constructed ones that thrive by developing connections across internal differences.

Q: How does paying attention to these authors’ use of form reveal new ways of thinking about internationalism?

AV: Literary forms, at the most basic level, help us make sense of the world around us. They imbue information and experience with meaning. At the same time, an unusual image, an odd turn of phrase, or an experimental narrative structure can delay comprehension in a good way. Formal experimentation unsettles and redirects a reader’s conventional patterns of recognition and attention. This is important for thinking about internationalism, which is, let’s face it, a more unfamiliar mode of belonging than nationalism. And because it is unfamiliar, broaching discussions of internationalism involves challenging patterns of perception and priority about who counts as a member of one’s community and whose needs are most pressing.

Formal analysis effectively shows how internationalist thought must anticipate and engage with public perceptions of national belonging and global relation. The authors in this study share a particular strategy of formal experimentation and a particular purpose. They each sought to alter readers’ perceptions about what constituted the unity or cohesion of an artwork so as to challenge dominant understandings of what constituted the unity and cohesion of a society. Testing received understandings of aesthetic and social cohesion allowed these writers to rethink collective identity and obligation in less bounded and less territorial terms. Claude McKay and George Lamming’s stories without plots and Zadie Smith’s root canals exemplify literary forms of unboundedness that represent political communities as interrelated rather than isolated units. These “chimeras of form” show how states of various scales (nations, empires, and federations) interact and further how their official narratives play a role in policing the borders among citizens, aliens, and subjects (those who count and those who don’t).

Q: The writers you focus on in each chapter seem to grapple with the competing pulls of national and international commitments. How does their work examine or seek to resolve this tension (you can choose one author to focus on)

AV: I’ll give two examples. Rabindranath Tagore used autotranslation as a way of balancing national and international commitments. In translating his Bengali poetry into English and editing the translation of his novel Ghare Baire as The Home and the World, he came to understand the entanglement of translatability and illegibility in cross-continental discourse. He also affirmed the particularity of national languages and literatures while challenging the myth of their purity and self-sufficiency. Tagore’s autotranslations mediate between a universalist version of internationalism that dreamed of perfect communication between nations and an autarkic version of nationalism that argued for cultural self-sufficiency as a marker of a colony’s readiness for political sovereignty.

Tagore’s Bengali texts were finished works of art, but they also became repositories of material to be cut, combined, and rearranged in English. His translation methods shed light on later writers’ techniques, particular Michael Ondaatje’s archival method in novels like Anil’s Ghost. Both writers see their work as intervening in the construction (and reconstruction) of not just national origin stories, but stories of international relation and perception. Ondaatje turns to the archive as a formal paradigm for illuminating the reductions and remainders, which accompany the transformation of stored artifacts into stories with semantic power. Like Tagore, he records the silences that accompany the transmission of content (across languages and media). He also pays close attention to how the unknown, the dubious, and the unverifiable persist in cases of atrocity where justice is predicated on the conversion of fragmentary evidence into meaningful and usable knowledge. Ondaatje proves that an archival method that grasps rather than denies the presence of chimeras is essential to contributing to projects of national healing and international justice in the context of civil war and human rights abuses.

Q: Your book is in a series in modernist studies but many of the writers you discuss in your book come after the heyday of modernism. What is your book saying about the legacies of modernism?

AV: I see modernism as a global phenomenon, which is why I also see it as a long twentieth-century phenomenon. The heyday of European modernism may have been in the early twentieth century, but even that periodization can be misleading if it implies that modernism started in Europe and then spread to Asia, the Caribbean, and Africa. European modernism is the aesthetic result of cross-continental encounters, which were and remain both violent and generative. To go beyond Europe though is to emphasize the difference between modernism as an assemblage of aesthetic movements flourishing in different parts of the world and modernism as an Anglo-American literary-historical institution.

In my book I am attentive to how the institutionalization of modernism has prevented scholars from fully recognizing non-European or minority writers as modernist. I am equally attuned to how the writers I feature conceive of modernism as a cultural and aesthetic legacy with which they sometimes eagerly and sometimes ambivalently affiliate. Tracing the history of concepts like modernism and exposing the power relationships embedded in their articulation is one way in which scholars of modernism can ensure they are deprovincializing their field as opposed to simply expanding it.