This post is a part of the inaugural week of the Russian Library, a new series that seeks to demonstrate the breadth, variety, and global importance of the Russian literary tradition to English-language readership through new and revised translations of premodern, modern, and contemporary Russian literature. 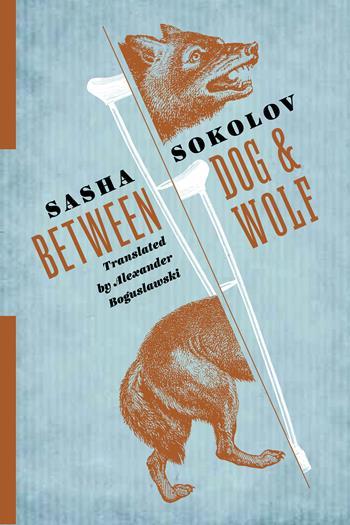 Alexander Boguslawski’s English translation of Sasha Sokolov’s second novel Between Dog and Wolf is the first of its kind, even though the Russian original was published in 1980. This English-language edition, recently published by Columbia University Press, marks the introduction of what has long been considered Sokolov’s most challenging work to Anglophone readers and, possibly, a new wave of Sokolov scholarship. We asked Boguslawski how he came to translate the “untranslatable,” what makes up his translation process, and what he hopes this new translation will achieve:

Not all translators are able to collaborate with the author of the text they translate. How did you come to meet Sasha Sokolov, what is your relationship like, and how–if at all–did it shape your translation process? How does working on a text by an author who is no longer living differ in terms of your sense of responsibility and confidence in your task?

We met in Vermont in 1982. After some brief letter exchanges that dealt primarily with my ideas about A School for Fools and with Sokolov’s inquiries about Polish translators, I decided to show him my sample translation of the School into Polish. I went to visit him in Vermont, where we walked around, talked, played Russian music, picked mushrooms, and admired the hills, rivers, and fields so attractive and enchanting to European emigres. His friends, who spoke both Russian and Polish, approved of my translation, and it came out in London in 1984. We’ve been good friends since then.

Having the author as an advisor and critic, but also as a friend is, in my opinion, extremely valuable and reaffirming. You simply know that you did not misinterpret the author’s ideas or that you caught what was hidden and could have been missed. And the collaborative translation process – getting together, talking, cooking, eating, drinking, laughing, breathing in unison – those are the unforgettable experiences which translating deceased authors can never give us. I would not hesitate to say that to translate an author without personal contact with her or him is a horrible burden on the translator. All the responsibility is on your shoulders, and regardless of how well you know the language and culture of the original text, sometimes it is impossible to guess what exactly the author wanted to say or reveal in his turn of phrase, in a hidden quote, or in a camouflaged reference. In contrast, the living author, especially when you consider him a friend, is a steady guide, a beacon of light you follow, a crutch you always have to support you.

How does your experience translating Between Dog and Wolf compare to that of translating A School for Fools?

I think that it could be useful to start with the common things: every word counts; remember that a master created these texts, so be humble trying to render them as faithfully as possible without imposing your translator’s ego on the final version; be aware of the music of the text, of the rhythm of the phrases, and don’t try to “improve” them.

English is an incredible and flexible instrument able to render the most complicated texts. Many readers would say that A School for Fools is “simpler” than Between Dog and Wolf. But it is not exactly so. They are simply different texts. The biggest difference is that Between Dog and Wolf forces the translator to render three distinctive narrative voices: the voice of Ilya the grinder, the voice of the authorial persona, and the poetic voice of Yakov. In A School for Fools we have one (well, we could argue about this) voice: the extraordinarily sensitive and complicated narrator and his alter ego. The other voices (the author, the narrator’s parents, Doctor Zauze, Savl Petrovich) more or less occupy the same linguistic register. The only distinctive and clearly distinguishable “other voice” is the narrative of Chapter two, and it’s down to earth, simpler, more prosaic. So, translating Between Dog and Wolf is definitely a greater challenge for a translator – besides complicated layers of vocabulary, it forces the translator to be more creative.

Between Dog and Wolf contains many original poems, and Sokolov’s prose is poetic in and of itself. What are some of the unique challenges posed by Sokolov’s “proeziia”(“proetry”), and how did you work to overcome them in your English rendering? An artist yourself, did your own creative sensibility influence the translation process?

Let’s start with creativity because I ended my last response with it. Creativity is a necessary and intrinsic element of any translation; after all, we are creating works of art and without imagination, invention, and artistic sense we would be just robots. As far as the prose is concerned, we have to be tuned in to the euphonic quality of the phrases, to sound repetitions, alliterations, rhymes, rhythm, and all the elements that constitute Sokolov’s “proetry.” Translating poems, in my opinion, is an extremely “delicate” artistic game: if I want to preserve the meaning and the rhymes of the poems, what am I willing to sacrifice? How much of “stuffing” or, as Russians aptly name it, “otsebyatina” (stuff from yourself) will I have to put in? Or how much will I have to rephrase the author’s expressions? Are my rephrasings adequate? Here we find ourselves at the border between creativity and making up nonsense. I try whenever I can to add as little as possible and when I add, I always ask myself: Does it fit the tone and style of the poem? Is it going to make the reader cringe or read it naturally as if it belonged there in the first place? Of course, most of these considerations are a matter of personal taste, personal sensibility, and creative restraint.

My Ilya Zynzyrella may appear to the readers who know the Russian original as too “literate” and “smooth” because his language does not have all the incorrect grammatical forms, dialectical forms, and diminutives and augmentatives so rich in Ilya’s Russian. But I tried to substitute for these differences by inventing language features English speakers will notice and appreciate: phonetic spelling of words, double negatives, and rendering his Russian “blunders” by English neologisms. Yakov’s poems may be missing some of his fascinating word plays – again, a result of sacrificing something beautiful for the sake of being as faithful as possible to the original meaning of the poem.

Between Dog and Wolf is rich in literary and historical references and wordplay. For English-language readers with little to no knowledge of Russian literary tradition, do you believe this text is truly accessible? To what extent?

If you read the text as it appears in English, you will have no difficulty understanding it. Most readers will probably not notice word plays or language “distortions” that I explain in the annotations. They will also not see the multiple references to Russian literature, Russian songs, proverbs, or Scriptures. However, we should be aware that most Russian readers also missed these references and that the average Russian reader was as puzzled by Sokolov’s text as an average English reader may be puzzled by Finnegans Wake. However, for the curious readers, I provide extensive annotations. These may not only identify the authors or sources quoted, but they also explain proverbial expressions and place names from the novel in proper cultural context.

Translators generally fall along a spectrum regarding how truthfully they believe a translation should adhere to a source text. How much creative license do you believe a translator has in their own production of text? Does this level of creativity change with respect to content, writing style, etc? If so, how?

We know from examples by Constance Garnett that one can produce a refined translation that reflects the moral or ethical sensibility of the translator. Are her translations bad? No; after all, thousands of English readers enjoyed Dostoevsky in her translation not knowing that she changed the original, imposed her Victorian taste on the text and presented to us a “different” Dostoevsky. That’s why new translations are needed, especially when they reveal better the stylistic, linguistic, and cultural idiosyncrasies of the writer.

This novel has long been regarded as “untranslatable.” Do you believe any text truly falls into that category? How do you understand your own success in carrying the spirit and language of Sokolov’s Russian into English?

I am sure that there are some works written mostly as a challenge to readers and translators. In those rare cases, I don’t think they deserve the effort or attention of the reading public. Sokolov’s books are not written to puzzle and confuse the readers. The more you open up to their beauty and their stylistic and verbal mastery, the more natural they become. But, as most of great literature, they are not written for lazy readers. Literature is art, and reading it can be difficult. But the rewards are enormous. I hope that my efforts in translating Sokolov are successful and appreciated, even if in a few years I decide that I could do it even better.

What are your hopes for this publication? Do you have any particular expectations for its reception or impact on academia and general readership?

First of all, I am hoping that Between Dog and Wolf will gain many new readers who were kept away from it by the linguistic complexity of the original. I would like to see critical studies by literary scholars from many Western nations. But most of all, I would like to see a general acknowledgment of Sasha Sokolov’s great talent and mastery. In the last few years, I have presented to English-speaking readers Sokolov’s literary essays and vers libres, the new translation of A School for Fools, and now the first translation of his best novel, Between Dog and Wolf. Working so closely with these unique works of art and admiring their artistic qualities and their exploration of the possibilities of language, I am absolutely convinced that today Sasha Sokolov is the most deserving candidate for the Nobel prize in literature.