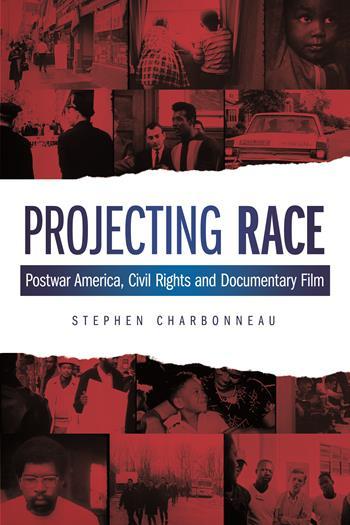 “Sponsored cinema – produced by governmental agencies, NGOs, and industry groups – is otherwise framed as the disposable other of film studies, lacking the aura of more conventional and artistically rendered films. And yet such works, thanks to their immediacy and ephemeral nature, help us recuperate lost or repressed historical experiences and thwart ingrained narratives about the uniqueness of present day dilemmas.” — Stephen Charbonneau

The following is a guest post from Stephen Charbonneau, author of Projecting Race: Postwar America, Civil Rights, and Documentary Film:

The Man in the Middle
By Stephen Charbonneau 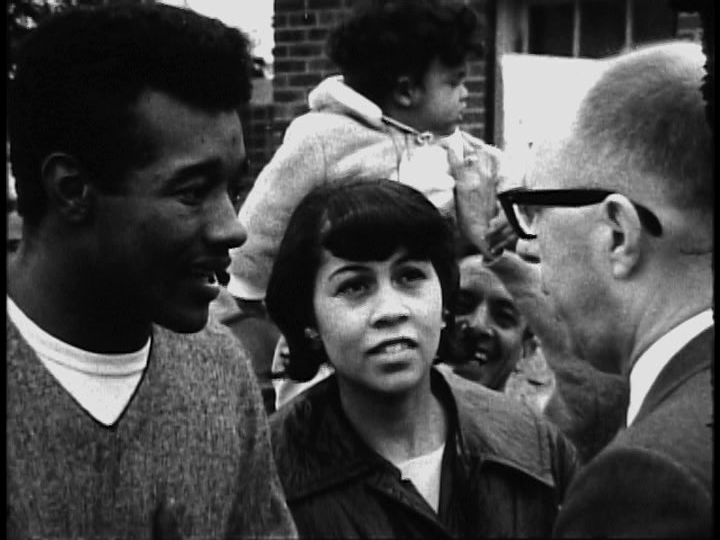 It’s an unexpected moment in a police training film from the sixties. The film image features an African American youth organizer named Stan Hamilton from South Jamaica, Queens pleading with school officials to treat young people with respect, to “listen to them…and let them tell you…what may be the underlying causes” for the social unrest in their community. Additional footage unfolds featuring Hamilton with the 103rd Precinct’s Youth Outreach and Community Officer, James Wren, as the film’s narrator urgently calls for collaboration between police and “street level leaders.”

The scene comes from The Man in the Middle (1966), one of a handful of training films produced by George Stoney for various police departments in the sixties. While most police training films function as mere inscriptions of proper police behavior, Stoney’s film embraces contemporary documentary techniques to pressure the police audience for this film to see local activists as collaborators rather than adversaries. In the film South Jamaica is positioned as a community that reflects a national crisis. By 1966, American cities are torn asunder by entrenched inequalities around race and class. Many communities of color were bereft of redress as the realities of structural racism continued to hold strong even after the passage of the Civil Rights Act of 1964. This historical background fuels the film’s urgency to imagine a new paradigm of community policing, one that is collaborative and sees young African Americans as partners in resolving conflict.

The cinematography of the film is energetically spontaneous and improvisational, catching interactions as they occur. This approach compels the film to specify the historical actors documented: who they are, where they work, and the specific circumstances at hand. But it also – at times – modulates the representation of reality by moving it away from the ideal and towards the ambiguity of the real. Stoney’s film – particularly once it focuses on the 103rd Precinct – allows key moments of observation and participation to silence the narrator. Perhaps the most important scene in the film features Hamilton’s direct address to the camera. Seated in his office, surrounded by several young African Americans, Hamilton compels the film’s audience to see Jamaica through their eyes. As he speaks, he directs our attention to a series of photographs published in Life magazine.

Now when you speak of a police department here in Jamaica, you must look at it as young folks would…For example, here you have scenes in a magazine and just about every daily paper of police attitude and action done unto black folk throughout or somewhere in the United States. Now we’re not going to identify where in the United States, why in the United States, because this is no different – you understand? – to the viewer who sees this in South Jamaica. He isn’t going to worry whether it’s in Selma, Alabama or wherever. All he sees is [pointing at photos of riot police] there is a policeman, there is a dog, and there is abuse. 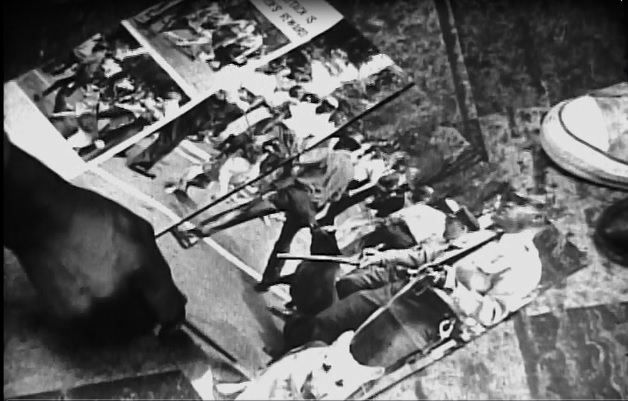 Hamilton’s use of the photograph compels the audience to see a reality they might not otherwise see, through the eyes of a young African American in South Jamaica. If showing us the photograph weren’t enough in and of itself, Hamilton specifically guides our look by pointing (‘there is a policeman, there is a dog, and there is abuse’). In doing so, the national scale of police violence and its inescapable racial inflections is both acknowledged and implicated at the local level of South Jamaica. For minority youth in Queens the events of Bloody Sunday in Selma are not bound by a particular geography. Rather, the ‘actions and attitudes’ exhibited by police in Selma traverse the country and constitute a national problem that links South Jamaica to other American cities. Lastly, the photographic spread draws our attention to mediation and the stakes of recording history as it happens. The imagery here retain their authenticity and document a crisis in process, one unfolding and overtaking the country at the moment of filming.

Nontheatrical films from the past – training films, community development films, educational films – have traditionally been overlooked (or mocked) for their presumed lack of artistry and utilitarian streak. Feature length documentaries and narrative films are the forms that are typically positioned as discrete works that endure. Sponsored cinema – produced by governmental agencies, NGOs, and industry groups – is otherwise framed as the disposable other of film studies, lacking the aura of more conventional and artistically rendered films. And yet such works, thanks to their immediacy and ephemeral nature, help us recuperate lost or repressed historical experiences and thwart ingrained narratives about the uniqueness of present day dilemmas.

The immediate visual evidence that has accompanied police abuse in recent years is echoed by an array of archival materials, like The Man in the Middle, that record and speak to a broader history of police misconduct towards persons of color. The experience of past police abuse in South Jamaica and the struggles highlighted in Stoney’s film were brought to the fore more recently in the mainstream media. A year and a half ago Eric L. Adams – Brooklyn Borough President and former police captain – authored a powerful op-ed for the New York Times, entitled “We Must Stop Police Abuse of Black Men” (12/4/14). While the piece closes with practical recommendations for curbing acts of police brutality towards African Americans, the opening is an unforgettable confessional about what it felt like to endure physical violence at the hands of police in South Jamaica, Queens as a fifteen-year-old: “I can recall it as if it were yesterday: looking into the toilet and seeing blood instead of urine. That was the aftermath of my first police encounter.” Adams was later determined to “make change from the inside by joining the police department,” although he encountered numerous cultural and institutional obstacles throughout his career. This testimony from the past echoes Hamilton’s pleas and contextualizes more recent acts of police abuse and violence as hallmarks of a long legacy of police abuse and distrust in communities of color.