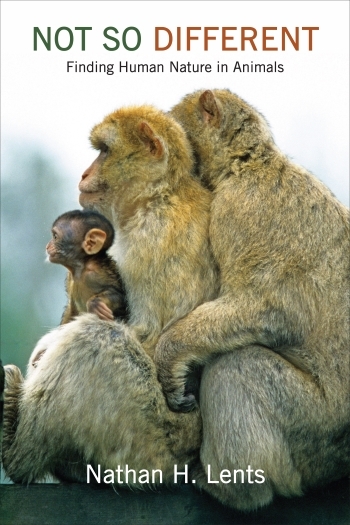 “Beginning in the 1990s, something unexpected happened. Some younger males stopped leaving their groups and the basic harem social structure fundamentally shifted for about one-fourth of the park’s mountain gorilla population. Instead of groups with one, or occasionally two adult males, scientists began observing very large groups including several adult males and females living together in relative harmony.” — Nathan H. Lents

This week, our featured book is Not So Different: Finding Human Nature in Animals, by Nathan H. Lents. Today, we have crossposted an excerpt from an article that Lents and Stacy Rosenbaum originally posted on The Human Evolution Blog.

Don’t forget to enter our book giveaway for a chance to win a free copy of Not So Different!

What Mountain Gorillas Can Teach Us About Gendered Behaviors
By Nathan H. Lents and Stacy Rosenbaum

Huge swathes of central Africa’s rainforests remain unexplored by western science, but the forests of Virunga National Park have been the object of intense scientific scrutiny since George Schaller and Dian Fossey began their pioneering work there in the 1950s. Since 1967, the population of mountain gorillas in Virunga have been the subject of continuous scientific monitoring, numerous documentaries, and the Oscar-nominated biopic, Gorillas in the Mist.

Much of what we know about the ecology and social behavior of gorillas stems from the constant observation of the Virunga mountain gorillas. Many common primate behaviors were first discovered in this population, including male contest competition – when males fight for access to females over whom they maintain exclusive mating rights; sexually selected infanticide – when males kill other males’ infants in order to bring females into heat and redirect their maternal attention on future children; and scramble feeding competition – reliance on food sources that are not monopolizable, which minimizes the utility of female dominance hierarchies.

Gorillas display substantial sexual dimorphism. Specifically, the males are more than twice as large as the females and powerfully built. This underscores their evolutionary legacy of male contest competition and polygyny. Indeed, gorillas were long thought to exist almost exclusively in harems, small multi-female groups led by one powerful silverback. Eating mostly leafy greens and seasonal fruit, the herculean strength and sharp canine teeth of silverbacks are used only for fighting each other. Typically, young males leave their birth group upon reaching adulthood and go through a solitary period before attempting to take over a harem or start a group of their own. Most are not successful.

Beginning in the 1990s, something unexpected happened. Some younger males stopped leaving their groups and the basic harem social structure fundamentally shifted for about one-fourth of the park’s mountain gorilla population. Instead of groups with one, or occasionally two adult males, scientists began observing very large groups including several adult males and females living together in relative harmony. Some groups hosted up to nine adult males, and one group topped out at 66 total animals. Twenty years in, this trend shows no sign of reversing.

The recalibration of mountain gorilla social dynamics poses very pointed questions for the field of evolutionary psychology. With its earliest roots in the nineteenth century work of Edvard Westermarck on the incest taboo, this discipline attempts to understand human cognitive attributes through the lens of our evolutionary history.

Central to evolutionary psychological theory is the notion that behaviors are the product of natural selective forces that reward reproductive success. Though this claim may appear straightforward, many controversial corollaries have sprung from it. One that appears frequently in popular culture is the claim that some behavioral differences between men and women might be the result of innate, naturally selected differences in our constitution. Intangible phenomena like professional ambition, competitive tendencies, and desire for a rewarding family life, along with more concrete cognitive abilities such as spatial and quantitative reasoning, are sometimes invoked in the otherwise thoughtful conversations about why we don’t see more female astrophysicists on the Harvard faculty.

Much ink need not be shed regarding the potential damage to gender equality these conversations can do. However, some retort that if a given claim is supported by facts, it should not be silenced in deference to a social ideal. Steven Pinker, in particular, identifies strongly as a feminist and insists that doors of access must always be kept open. He would draw a line, however, if society pushes its social agenda so far that the potential achievement of some is sacrificed to develop the potential of others who may have less natural ability. Where that line might actually be found is difficult to say.

The problem, according to some, is that social engineering has costs. If men are, on average, naturally better than women at math, enforcing gender parity in top mathematics positions would mean elevating some of lesser natural ability over some with greater natural ability. The effect for society is a net loss in the fruits of our collective mathematics potential, quashed at the hands of social engineering.

Humans clearly harbor some average biological differences between the sexes. Male breasts rarely produce milk and women have no equivalent of the prostate gland. While there are some excellent female sprinters that could run circles around most men, the very fastest sprinters are all men and the average man is faster than the average woman.

Behavior, however, stems from the brain and its associated neurochemistry. The notion that brain anatomy is different between the sexes has been roundly discredited. On any one measure, for example the thickness of the corpus collosum, there may be average sex differences, but the ranges within the sexes are bigger than the average difference between them, and the ranges overlap substantially.

Crucially, any one individual will exhibit a combination of characteristically male and female measurements for different parts of the brain. The sum of this is that even an expert neuroanatomist has about a 50% chance of correctly predicting the sex of a brain based on anatomical measures. There is simply no such thing as a “male brain” and a “female brain,” at least not anatomically.

More to the point, research has yet to exclude environmental causes for the few observed sex differences in cognitive abilities. No child has ever been reared free of the pervasive influence of socially constructed gender norms. As Elizabeth Spelke and many others have shown, even the most feminist parents begin treating their male and female children differently on their first day of life. We are very far from knowing what males and females might naturally aspire to and be capable of, absent the influence of a social environment that shapes them to be, and to want to be, different.

Evolutionary psychology, seemingly the curmudgeon of progressive thinking, may actually provide the answer to the very dilemma it raises. In his passionate attack of “the blank slate” promoted by Stephen J. Gould and many other progressives, Pinker convincingly establishes the genetic basis of certain behaviors as drives, instincts, and tendencies that provide a wide, but not infinite, range of possible outcomes. Underneath this is a principle, as simple as it is elegant, that genes plus environment equals behavior.

While blank slate proponents ignore the role of genes in creating behavior, evolutionary psychologists may be underappreciating the role of environment. In their worry about men whose wings are clipped to make room for women, they forget the girls whose preferences are shaped by a world that tells them how cute they are, rather than how strong or how smart. In her new book, Beyond Biofatalism, Gillian Barker expresses the challenge saliently:

By obsessing over the costs and dangers of trying to over-correct gender differences in professional achievement, evolutionary psychologists may be showing insensitivity to the very forces responsible for the differences. After all, their own defining principle emphasizes the importance of context in any consideration of how drives are turned into behaviors.

Read the rest of the article at The Human Evolution Blog. [The authors do not speak on behalf of the Dian Fossey Gorilla Fund International, which has not endorsed the views represented here.]