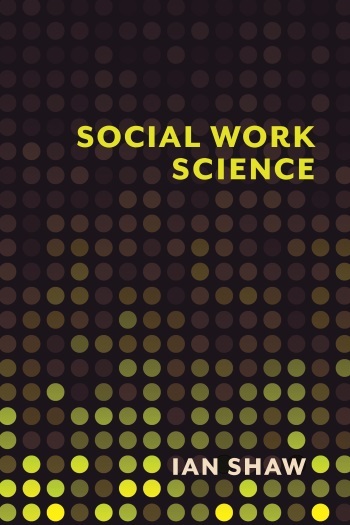 The following post is an interview with Ian Shaw, author of Social Work Science:

Right through its history there have been those who believe social work will be all the better for being regarded as in some sense as a science. I guess you are adding to this debate?

Well, I feel uncomfortable with this way of seeing things. Is social work a science? I believe for various reasons that will surface through the book that this is an unhelpful question. No social work is free from science. The ambiguous implications of these words permeate all I have written. I am not offering incorrigible assertions. For example, I distinguish evidence, understanding and justice but I do not seek to separate them. I am engaged much in defining, distinguishing, and connecting. In so doing I do not aim for some lowest common denominator. This I find of little use. It would be a poor social work science that contented itself with distilling what all statements about it have in common. While it is of undoubted use to identify what social work science in its varied manifestations has in common, it is equally, maybe more important to identify and describe its particularities. Thus I doubt it is feasible to find in a single statement (or even two or three) some way of capturing the essential meaning of social work science.

So how have you tried to approach this?

I see the work of science as a form of social action marked by a complex interplay of choice, action, and constraint. In principle I am not opposed to the idea that science in its relation to social work may be expressed rationally and, I would possibly say, systematically. But this is not in any exhaustive sense the organizing purpose of how I see their relationship, which frequently is more occasional, historical, and contextual. Augustine spoke of the doctrine of the Trinity as a fence around a mystery – i.e. it tells us what it is not and not quite what it is. I might say likewise of this essay. I am trying at best to offer not an entire body but a skeleton without which the social work science body will be flabby and misshapen. But this is some way from saying that social work as such is a science. This book is called Social Work Science to capture the multifarious ways in which, for good or ill, social work is never free of science, and to bypass the miserable connectors, ‘and,’ ‘in,’ ‘of,’ and even ‘for,’ that seem to duck out of some of the important questions.

This sounds rather broad. To what questions does your approach point?

The book may come to be seen as distinctive in several ways. First, historical questions play a larger part and a different role from most social work writing. I treat many problems in part through a historical lens, such that I am as likely to find persuasive a writer from fifty or a hundred years ago, as one from the present decade. Second, although the book is about social work science it will soon be apparent that this in no way privileges social work writing. There is as much of Becker, Campbell, Collins, Cronbach, Giddens, Kuhn, Schutz, Weber, and Williams as there is of social work writers. This is not simply to widen and enrich social work – although it does both of these – but because many of the questions considered in the book are not social work in origin. While I do hope to convey a ‘social work imagination’ and ‘gaze’, for me the relationship between social work and, for example, sociology is a permeable membrane and not a wall. Third, the book deals in some detail with themes that either are absent from or treated in thin and unreflective ways in social work literature. For example, it is part of the platform of this book that one cannot understand social work science without delving in some depth into broader forms of knowledge and action. I have much to say about the meaning and implications of saying we have tacit knowledge, expertise, faith, or common sense understandings of something. I also give considerable attention to the nature of social work science as a social project, through elaborations of social work inventions, networks, controversies and so on. The extent to which the voices of mainstream scientists are heard through the chapters is also perhaps original in social work writing. Finally, I have much to say about language.

Does this book contribute to your commitment to qualitative methods?

This is not a methods book – or even a methodology book. There is almost no discussion of methods, except when I consider the history of methods or when I turn to questions of methodology for the illumination they shed on social work science. I take in one sense a conventional position in that I believe good practice – scientific or otherwise – is founded on good understanding. But where I place my emphasis in this book is on the argument that prescriptions for practice – whether evidence-based, hermeneutic, postmodern or whatever – too often leap to practice prescription with undue attention to understanding. So I spend perhaps more space on understanding the various forms of scientific practice than on starting from ‘pure’ statements of this or that, or being for or against any specific position.

Would you encourage social work practitioners to read your book?

I hope that the book will be read by but stretch all kinds of readers, but practitioners no more so than professors long in the tooth. I have done my best not to fall into the trap, in Foucault’s words, of joining ‘the great warm and tender Freemasonry of useless erudition.’

Have you enjoyed writing this book?

Yes, hugely so – but this has been a demanding book to write. I was much persuaded by Jonathan Franzen who, when speaking of influences on his writing, observed ‘As a writer … you owe it to your readers to set yourself the most difficult challenge that you have some hope of being equal to.’ Foucault remarked ‘the reader can easily tell when you have worked and when you merely talk off the top of your head’ and added ‘to work is to undertake to think something other than what you thought before.’ Having attempted to do so, and to write with critical good manners, I leave the reader to ‘tread on my dreams’, because s/he who writes does not have the right to give orders as to the use of their writings.