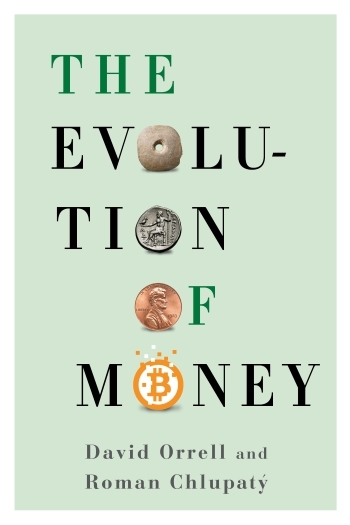 “Indeed, one of the things holding back the adoption of cybercurrencies including bitcoin is that they do not conform with traditional ideas about money. But is the problem with bitcoin, or have our ideas about money failed to keep up with its evolution?” — David Orrell

This week, our featured book is The Evolution of Money, by David Orrell and Roman Chlupatý. In “The Changing Faces of Money,” David Orrell looks at the rise of cybercurrencies and what they can tell us about what money actually is.

The Changing Faces of Money
By David Orrell

The question, “what is money?” is one that never seems to go away. Were medieval bills of exchange money? How about fiat currencies? Its latest manifestation tends to focus on cybercurrencies such as bitcoin – are they as good as regular coins?

To some techno-enthusiasts the answer is a resounding yes, but to many people it is less clear. This skepticism was captured by former Federal Reserve chairman Alan Greenspan, who once told Bloomberg, “I do not understand where the backing of bitcoin is coming from. There is no fundamental issue of capabilities of repaying it in anything which is universally acceptable, which is either intrinsic value of the currency or the credit or trust of the individual who is issuing the money, whether it’s a government or an individual.”

Indeed, one of the things holding back the adoption of cybercurrencies including bitcoin is that they do not conform with traditional ideas about money. But is the problem with bitcoin, or have our ideas about money failed to keep up with its evolution?

Bullionists, for example, argue that money needs to be backed by precious metal, which bitcoin most certainly is not. Chartalists (from the Latin charta for a record), on the other hand, assert that coins and other money objects are just tokens that the state agrees to accept as payment of things like taxes. Again, bitcoin fails. Most mainstream economists, meanwhile, would ascribe to the view that money has no unique or special qualities, but instead is defined by its roles, e.g. as a medium of exchange. But emerging cybercurrencies do not have much use as a medium of exchange – at least at first.

So how do they become money (if indeed they do)? In The Evolution of Money, we argue that the answer to this question is that money of any sort, from clay tablets in Mesopotamia to gold coins to modern cybercurrencies, has dualistic properties – analogous to the wave/particle duality of quantum physics – which give it special characteristics, including the ability to be booted up from the ether.

Money, at its core, is a way of mixing the concept of number with the physical world. As an example, consider a U.S. dollar bill. On the one hand, it is a physical object which can be owned, traded and valued. On the other hand, it represents the number one, which is why it says “1” or “one” in fifteen different places. And numbers and purely physical things are as different as waves and particles in the quantum analogy. Numbers live in the abstract, virtual world of mathematics, while things live in the real world. Numbers are exact, while qualities such as perceived value depend on the person and the context. Numbers are hard and fixed, like the particle aspect of matter. Concepts or judgments such as worth or value are fuzzy, like the wave aspect of matter. The tension between these contradictory aspects, which are held together in money, is what gives it its powerful, paradoxical, and constantly changing nature.

The trade of money objects for goods or labor in a market means that those things attain a numerical value as well, namely the price, by contagion, just as the atoms in iron spontaneously align in a magnetic field. Market prices are therefore an emergent property of the system, in the sense that they emerge from the use of money objects. Of course, a bitcoin transfer, or for that matter one carried out by swiping a credit card a till, does not resemble the traditional, Newtonian idea of a self-contained object or thing; but then neither does matter when viewed from a quantum perspective. The real and virtual become blurred.

Money objects, be they a banknote or a bitcoin, are unique in that their value is designed to be objectively fixed and stable. For other goods, their values are indeterminate until the moment they are exchanged for money. This special status makes money objects desirable in themselves. Money can therefore turn paper, or computer bits, into something like gold. It is no surprise that central banking is often referred to as a modern form of alchemy.

Implicit to traditional theories is the idea that money has to be backed by some pre-existing quantity, either real (e.g. metal) or virtual (e.g. the law of the state). It therefore passively inherits its value from outside. But we argue that, rather than money being backed by something of monetary value, it is the other way round – market prices emerge dynamically from the use of money. This is why money should be at the center of economic thought, rather than treated as a kind of distraction as it often has been in classical or modern economics.

A cybercurrency is supported not by metal or the state, but by something much more distributed and amorphous – its network of users. A property of networks is that their power expands rapidly with size. The value of a cybercurrency therefore grows in the same way with the size of the network of users, so can initially be near-zero. It is not necessary to begin with an external debt or a source of value, because the two can expand together.

Such properties only make sense if we appreciate the dualistic, creative, and unstable nature of money. After all, if there is one thing that the history of money shows, it is that money changes everything – including itself.