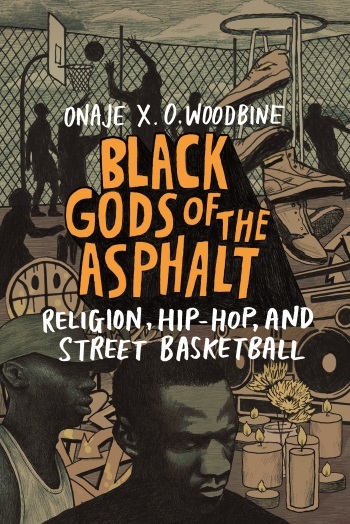 “I want the book to elevate the conversation on black masculinity and sports…. I want people to recognize that you can find religion in strange places, that this community has its own innate healers, its own innate capacity to heal, that these young men have agency, and that there is freedom within this community in places you wouldn’t normally expect to find it.” — Onaje X. O. Woodbine

This week, our featured book is Black Gods of the Asphalt: Religion, Hip-Hop, and Street Basketball, by Onaje X. O. Woodbine. Today, we have excerpted part of an interview with Onaje X. O. Woodbine, conducted by Matthew Reed Baker, that originally appeared in Boston Magazine, in which Woodbine discusses his creative process and what he hopes the book will achieve.

At any point did you think that nobody could’ve written this book but you? It seems like the perfect match of author and book.

Howard Thurman, one of my favorite scholars and thinkers, has this phrase that we all have a “working paper.” The best scholarship is autobiographical. I’ve always viewed scholarship as a deeply personal project. In some ways, I do agree with you that only I could have written this particular project, but in other ways, part of the insight I learned from writing the book is that my self is made up of other selves. And so, if you dig deep enough within, you come out on the other side, you recognize the social world. Some of the best scholarship recognizes that society and the person are not mutually exclusive.

I think the experiences that are happening in Roxbury, Dorchester, Mattapan are happening across other cities because the social context is very similar. There may be some changes in style and variation in the way that it is expressed, but they’re dealing with societal challenges and poverty, and these basketball courts are spaces of refuge, especially for young black men who don’t have access to traditional buffers against structural violence. They don’t go to church as much anymore, they don’t have access to quality therapy, and as you can see in the book, the family is largely fragmented.

Black men have always been linked to the physical, so the myth has been that black men are bound in body but not in mind. Sports dramatize that myth in such a powerful way that many black men in inner cities are attracted to it. They may be attracted to it because they’re pushed by race or poverty or social narrative, but when they get on the court, the lived experience of running up and down the court, rubbing your body next to your brother, and expressing your pain…it transcends the reasons why you got there in the first place. It’s deeply personal and deeply social at the same time.

There’s such a weaving of style and form in this book. What was your approach?

I wanted to mirror the culture in my scholarship, but I didn’t want to strip the community of its language. In the history of African American culture, different genres of self-expression have always been complementary. During the Harlem Renaissance, jazz and basketball often were performed on the same stage on the same night. In the hip-hop generation, it was b-boy/b-girl dancing and rap music, while basketball was performed in the same park at the same time, and you’d have the boombox out there. So it was a confluence of different forms of African American self expression.

It was a labor of love, and I wanted it to be in a language that the academy and general public could understand, but also that the community would recognize as authentic. That required an interdisciplinary approach. On one hand I had to use social theory, the theory of masculinity and race to recognize the objectifications of the black male body. On the other hand I needed poetry. I needed religious studies. I needed the first-person account to call into question those things. You need all of those tools. That as the hardest obstacle I faced. It took a few years to really find the tools, understand how to apply them, and there was a lot of grappling in the dark.

When a book mixes ideas and genres well, it’s seamless. How do you do it?

When I read it for the first time in full after all those years of work, you know what was the metaphor I had in my head? A basketball. [Laughs] It really felt round. The book itself, it felt like there were no corners, nothing stuck out. It felt like a cohesive unit. I kept thinking of a ball, a basketball. I kid you not.

You mention in the book that you had to leave your community in order to write about it.

This book was also born out of personal trauma of experiencing the violence of the inner city. I myself embody the pain of living in a racialized and poverty-stricken community, and with growing up, I constantly felt as if my life was in danger. I’d walk out of my house, and there was a gang right on the corner in front of my door. I went through this. I was depressed for a while growing up. I had very low self-esteem. I wondered—because I was in the METCO program—why the students I went to school with out in the suburbs had nice homes and we didn’t. I also wondered about my past. I wondered if I really was just a slave or a descendent of a slave, if there was nothing prior to that.

When we’re born into that kind of world, you internalize it, you take it for granted, and often you turn the pain inward. You blame yourself or the people around you. And you can’t necessarily prove how the larger society, mainstream society, and dominant culture has created a society in which you are meant to feel that way. I needed to leave that environment to heal. I needed to see other people who looked like me, who weren’t angry all the time, or weren’t part of a gang, or weren’t depressed, or weren’t smoking drugs because something had happened in their life. I needed to see that I could be something else.

But at the same time, once I got to Yale and into university culture, I also didn’t fit in there. I realized there was a tremendous loss associated with being out there. On the one hand, I was safe, I wasn’t constantly worried about violence. But on the other hand, I had to leave all the people I cared for behind, and my culture. Living in two worlds and being in that middle space, in some ways, was a privilege. I see myself as a bridge and I’m very thankful. And yet you feel like you’re always an exile, you’re always homeless.

What do you want this book to achieve once it comes out?

I want the book to elevate the conversation on black masculinity and sports. I think that the old messages of trying to solve structural racism are important, but need to be expanded upon. Particularly unconscious bias, and the kind of racism and bias that lives in our bodies. My question is: How do you transform people’s consciousness, that both they and others are human beings? I think that requires getting into your body and recognizing the trauma and the history that lives within us. I want people to recognize that you can find religion in strange places, that this community has its own innate healers, its own innate capacity to heal, that these young men have agency, and that there is freedom within this community in places you wouldn’t normally expect to find it. The standard view in literature on sports and race is that these young men are determined by a desire for social mobility and socioeconomic status, and that’s why they’re on the court. Part of what I want to do is challenge that narrative and say, “No, there are deeper human reasons why they are on the court in predominant numbers.”

Read the interview and accompanying article at the Boston Magazine website.